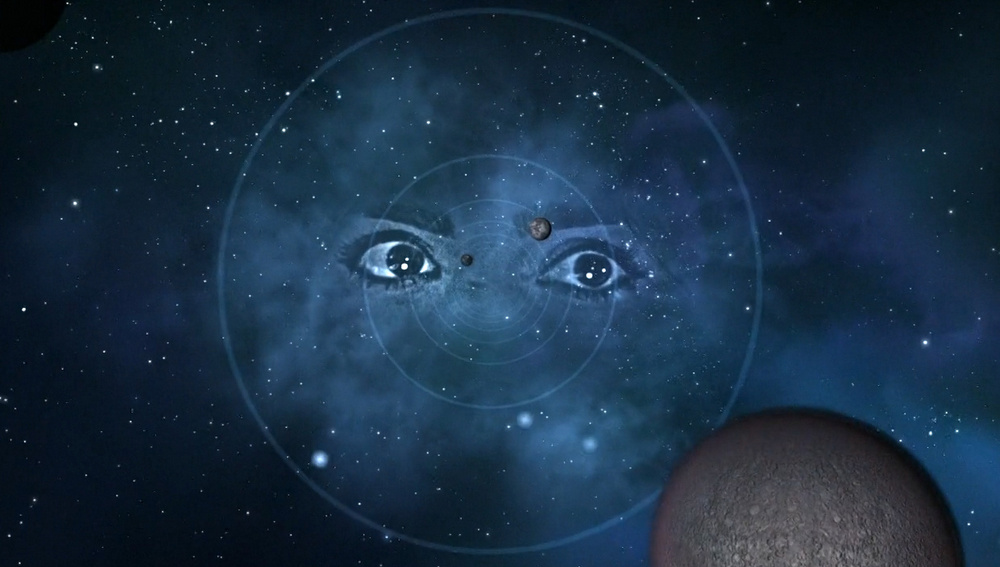 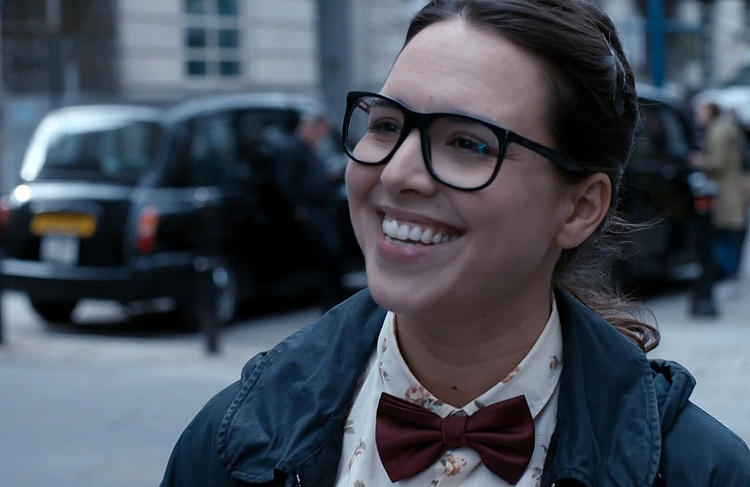 Look at that face. Moffat, how could you? 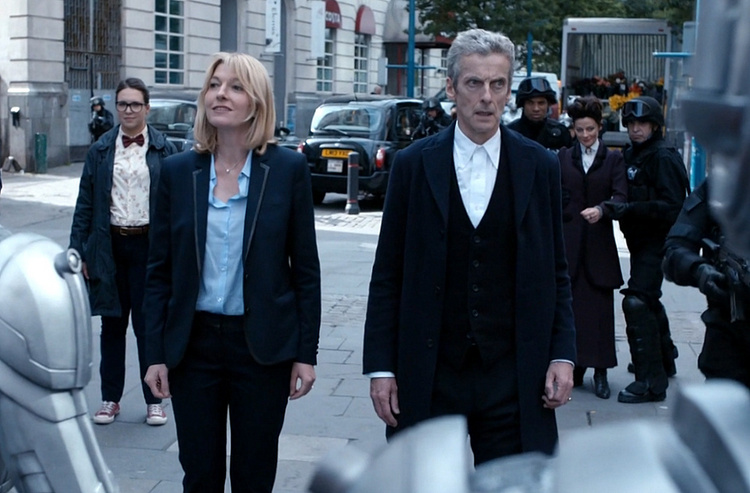 He’s on the payroll
Am I?
Well, technically
How much?
Shush!

How does the Doctor always forget he works for UNIT anyway? 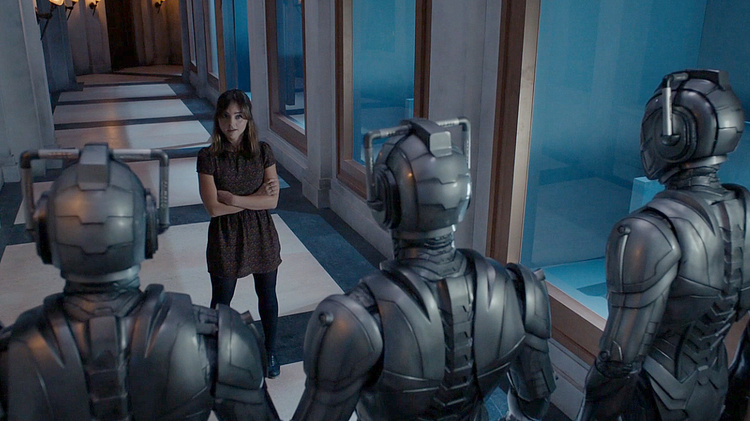 I’ve been married four times, all deceased. My children and grandchildren are missing, and I assume dead…

Finally, a reference to the Doctor’s family. Now how many of the Doctor’s companions know this much about him? The title sequence was a nice reference to Clara posing as the Doctor and a send-off for Jenna, giving her top billing in this week. 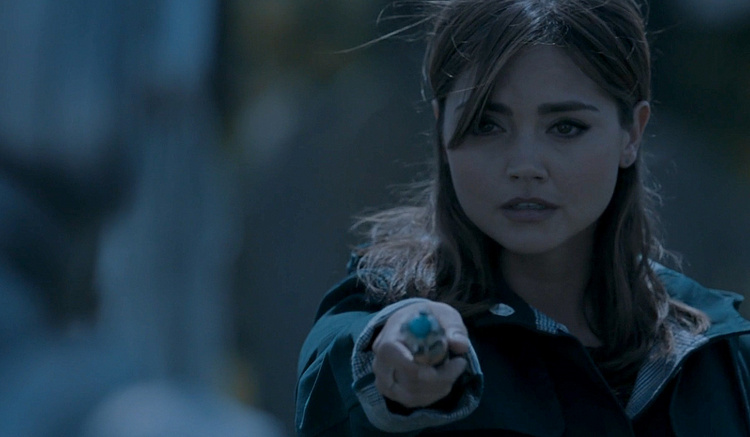 One of the poignant moments of the episode, Clara erasing Danny’s emotions represented several things. Firstly Clara in in the Doctor’s shoes again, having to make a difficult choice to save humanity. Secondly it touches on letting a loved one die to put them out of pain. And thirdly this is the moment Clara had to really let go of Danny, both physically and emotionally. 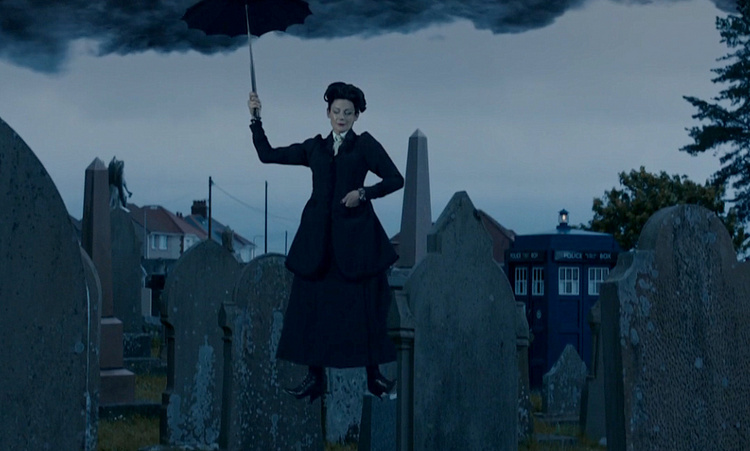 I really don’t think we needed Osgood’s horrible death to show us how villainous Missy was, her completely delightfully deranged behaviour – Oh Missy you’re so fine…you’re so fine – was rather enough. But her Mary Poppins entrance was absolutely classic. We’ll discuss that blue teleportation light later… 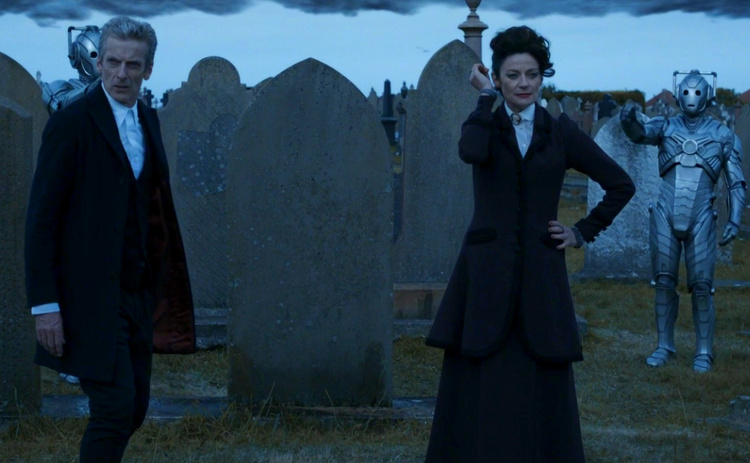 Missy’s reason for creating an Cyberman army came as rather a surprise. Creating an army merely to gift it to the Doctor to try and tempt him to the dark side may have come off as a bit glib but I rather admired her subtle statesmanship. And the sheer effort put in to the project. As Moffat said in this week’s Extra the Master/Mistress wants a worthy opponent. But why is it so important to Missy that the Doctor be the same as her?

There was no less of the emotional impact that the Tennant/Simm Doctor/Master relationship had with the new Capaldi/Gomez pairing (and I expect Moffat will keep his sort-of-promise we’d see Michelle again). Missy supplicating before the Doctor and telling him she needed her friend back was heart-breaking and as far as I am concerned she absolutely stole the emotional highpoint of the show.

I Am an Idiot… 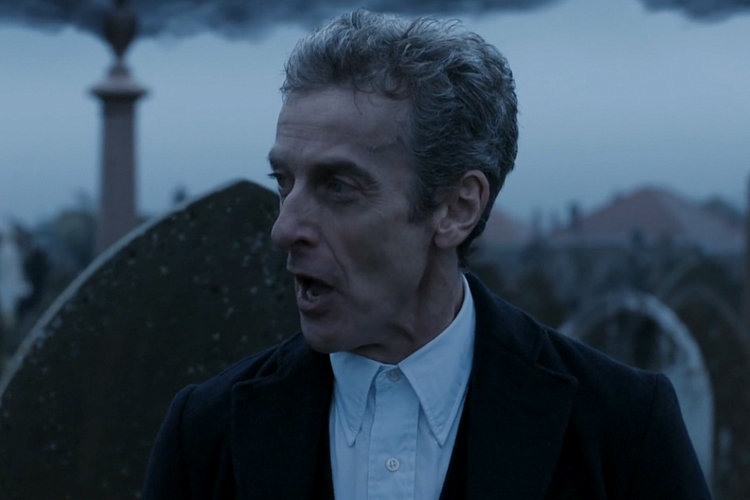 …with a box and a screwdriver. An immense weight was lifted from the Doctor’s shoulders in this moment. Following a theme that not only he, but Clara has also been wrestling with. Not a good man, not a bad man, and not an officer. Just a man/alien trying to help out. 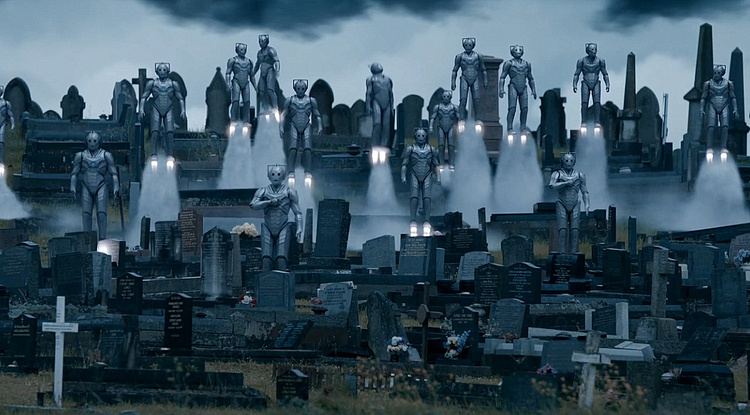 …is the one left to save the Earth. The army of the dead will save the land of the living declares a yet-to-be-thoroughly-cooked Cyberman Danny before he leads them all up to burn the clouds. And interesting play on the Good Man/Good Soldier theme that has dominated this season – and a chance for P.E. to be useful (for a change).

The Other Disobedient Soldier… 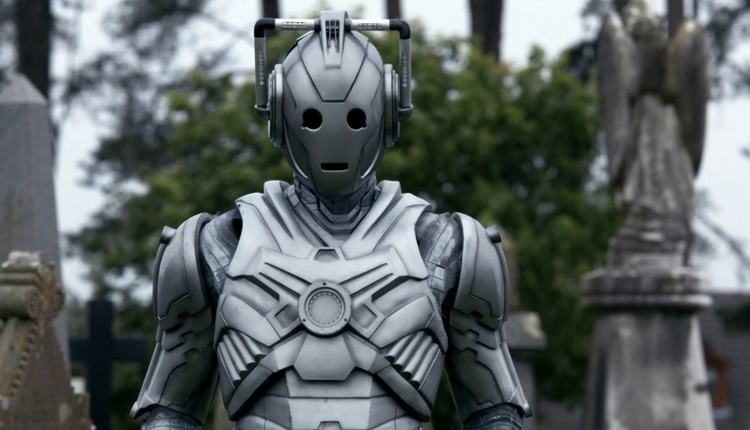 The return of the Brigadier has caused some discord. In Moffat’s mind as the entire population of earth’s dead has been turned into Cybermen it stands to reason that the Brigadier is out there somewhere (along with other companions). But we’d had rather enough death to be getting on with. The Brigadier came out to break his daughter’s fall, and I was so pleased to see Kate alive. As Moffat said in Extra the Brigadier would never be taken over by an alien monster. I agree it could be discomfiting but then this wasn’t a pleasant episode. And the moment where the Doctor was able to fulfil the Brigadier’s dearest wish of having the Doctor salute him just one time certainly made me teary, along with the wonderful line:

Of course. The earth’s darkest hour…and mine. Where else would you be? 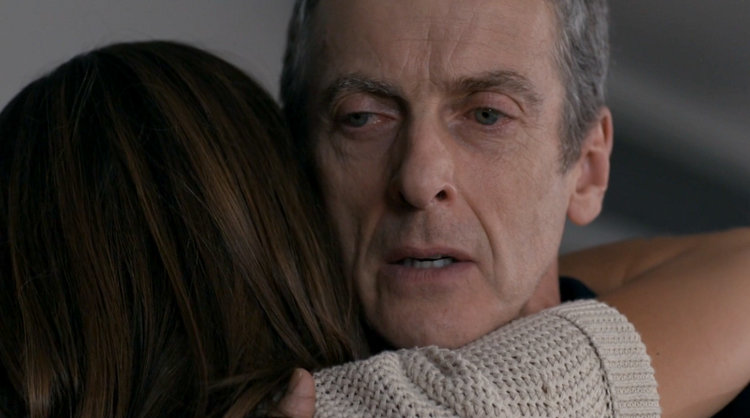 We had wholesale death, destruction and grief in Death on Heaven but the bleakest moment was the most human moment. The Doctor’s terrible despair at being betrayed by Missy and Clara’s grief when she realises Danny has to sacrifice his own chance at coming back from the dead to give life to the little boy he accidentally killed all those years ago, leads to two old friends lying to each other with practised ease. The Doctor lies to Clara about finding Gallifrey, thinking he is freeing her to go on to a normal life with Danny. Clara thinks that by concealing Danny’s decision she is allowing the Doctor to let go of her and go back to his home on Gallifrey. The ending was beautifully done, with just enough left unresolved to make us wonder if this is really the end between two best friends.

And now we know why this Doctor doesn’t like hugs.

Never trust a hug. It’s just a way to hide your face.

And one last thing…

The James Bond reference in the Doctor’s skydive into the TARDIS complete with Bond-ish score was delightful, referencing two Bond films that we can think of. There was Pierce Brosnan’s Goldeneye motorbike/skydive/aeroplane stunt where Bond, not quite caught up with the aeroplane before he gets to the edge of the ravine, hurtles off his motorbike and skydives neatly down to the aeroplane to catch his foe. And Timothy Dalton’s lowered-from-a-helicopter-and-lassoing-a-plane wedding entrance in Licence to Kill  must be mentioned – being part of the Whoniverse we can’t leave Timothy out. C.S would have preferred we saw the Doctor actually gain entrance to the TARDIS (I agree but what can you do). And the Whoniverse reference- River Song diving into the TARDIS pool from a balcony in The Day of the Moon.

The Cybermen appearing in the aeroplane window referenced the Gremlin.

The original 1963 Twilight Zone story starred William Shatner as Bob Wilson, a salesman on an airplane for the first time since his nervous breakdown six months earlier. He spots a gremlin on the wing of the plane, who pops out of sight every time someone else looks at him. Of course the Cybermen are not so shy about letting everyone see them. John Lithgow portrayed the main character renamed John Valentine in the 1983 remake Twilight Zone: The Movie. 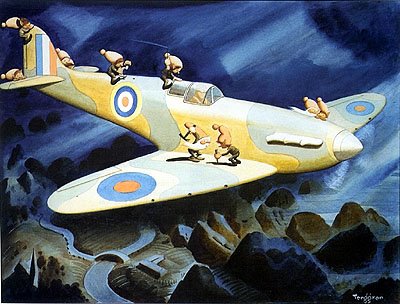 Roald Dahl’s 1943 The Gremlins also featured Gremlins this time trying to destroy an aeroplane, although these Gremlins are seeking revenge for the destruction of their forest home, which was razed to make way for an aircraft factory.

Before I digress any further about Gremlins – we’re not quite done with Doctor Who. Read on:

Doctor Who: Death in Heaven – The Good Soldier, The Idiot and The Good Liar