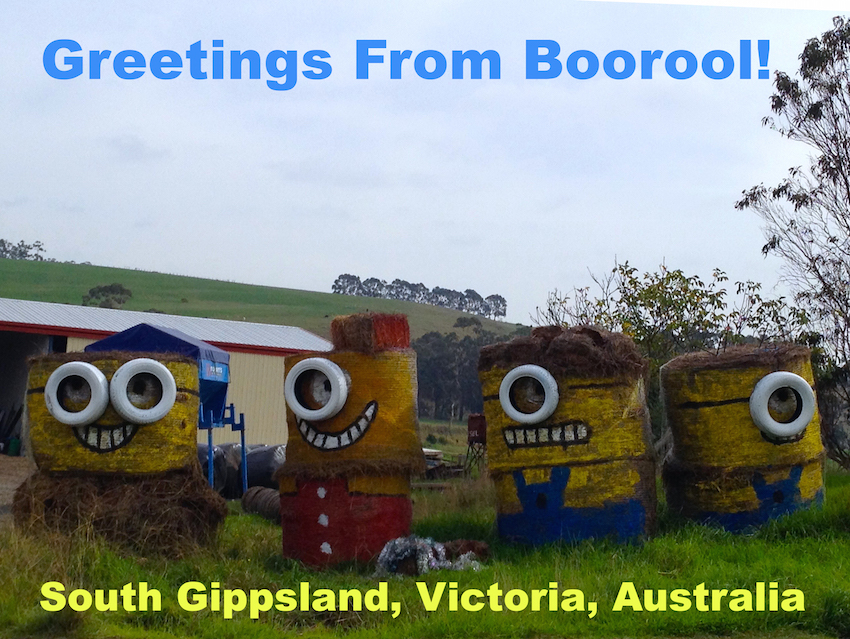 Further proof that South Gippsland is the nerdiest, and therefore the best part of the countryside. Not only is it home to gorgeous centers of arts and crafts, with crochetted trees, medieval recreationists (I’m assured that’s a hobby, not a religion) an annual GeekFest, and innumerable cows (cows with their goofy faces, sociable but sometimes obstinate demeanours and interest in cheese production and global warming, are undoubtedly the nerdiest of the hooved animals), it also has hay bale Minions.

The Minions are of course the impish and somewhat rambunctious creatures that evolved from single celled organisms with the sole purpose of serving super villains, they first appeared in the animated sci-fictional comedy film Despicable Me, and this year are starring in their own film, Minions.

These hay bale Minions appear on the Strzlecki Highway near Boorool, in South Gippsland, a lush green region of rolling hills that makes it perfect dairy and farming country. The confusion of vowels in the first and the repetition of vowels in the second also give both an appropriately super-villainous sound. I expect there is probably a high tech hidden base up in the hills somewhere, possibly run by a super-intelligent Friesian, plotting something to do with control of the worldwide yoghurt industry.