Leave the Lady Alone, She Should Be Buried

…cried the newspaper headlines in 1965. Anne de Mowbray, 8th Countess of Norfolk, died tragically young at the age of eight. She was known as ‘Her High and Excellent Princess’, the wife of Richard of Shrewsbury, Duke of York, the son of King Edward IV. Edward gave her a lavish funeral. Her body was entombed in a lead-lined coffin in the Chapel of St. Erasmus in Westminster Abbey. When that chapel was demolished in about 1502 to make way for the Henry VII Lady Chapel, Anne’s coffin was moved to a vault under the Abbey of the Minoresses. The coffin eventually disappeared, until December 1964, when construction workers accidentally dug into the vault and found Anne’s coffin. Her remains were immediately taken by scientists for analysis, much to the horror and disgust of the public and the House of Lords.

“I was horrified when I discovered what was happening to the body,” Lord Mowbray, a collateral descendant of Anne Mowbray, told reporters in 1965 “Any further research should stop at once. I am amazed that the reburial has been so delayed, particularly as so many things have happened which had no right to happen – including the removal of the coffin and the examining of parts of her body.”

The King in the Car Park

The difference between Anne Mowbray and Richard III, one a Princess and one a King, is that an inscription attached to Anne Mowbray’s coffin could be deciphered giving Anne’s name, titles and date of death. Anne could be easily identified. Richard III would require DNA testing to be identified. His original tomb was lost in the Dissolution of the Monasteries. The last mention of his burial place was in 1612, when Christopher Wren – future dean of Windsor and father of the architect of St Paul’s Cathedral – saw ‘a handsome stone pillar, three foot high’, bearing the inscription ‘Here lies the body of Richard III, some time King of England’ in the garden of Robert Herrick, one-time mayor of Leicester.

On the 25th of August 2102, exactly 527 years after Richard III’s burial in Greyfriars Church in Leicester, archaeologists based at the University of Leicester and commissioned by Philippa Langley of the Looking for Richard team, uncovered a leg bone. It was the very first day of the ‘Greyfriars dig’. “All I can think is that it’s Richard,” Philippa wrote in her book, The King’s Grave. The archaeology team were unsurprisingly hesitant about making any judgements. On Wednesday the 5th September, thanks only to the insistence and personal instruction of Philippa, the client undertaking the dig, his remains were exhumed and taken back to the University for the necessary DNA testing.

On 4 February 2013, the University of Leicester confirmed that the skeleton was beyond reasonable doubt that of King Richard III. The examinations had taken place. Philippa Langley expected that she, as the custodian of the remains, would now be able to transfer Richard III’s remains to a sanctified place of rest to await reburial. The expected place of reburial would be Leicester Cathedral. Only the University, it would appear, had not finished their examinations.

Twelve months later Philippa is still waiting. On February 5th 2014 she told the BBC “My agreement in place locally says that following identification, as the named custodian of the remains, I would be able to take Richard to a place of sanctity and rest to await reburial. That’s what it says, it’s pretty simple.” 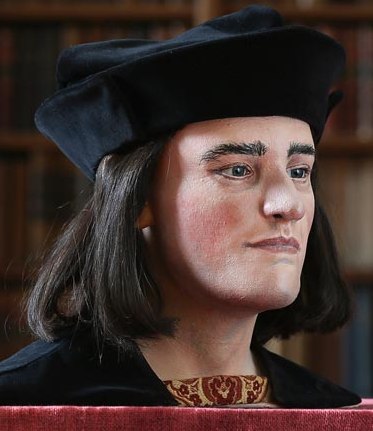 The University has been holding the remains in a secure environment these last twelve months. What have we learned of Richard III in these last twelve months? The initial examination told us his height, that he suffered scoliosis, had numerous battle-wounds and that the death-blow took off part of his skull. A facial reconstruction was then commissioned, however the data available to forensic artists is still very limited in ranges of ages, sexes, and builds, and this greatly affects the accuracy of reconstructions. As detailed in Dr. John Ashdown-Hill’s forthcoming book, The Third Plantagenet, the one thing the accepted portraits of Richard III have in common are grey/blue eyes and wavy hair. The facial reconstruction has straight hair and skin that appears much younger than that of a 32 year-old man living in the middle ages.

Still these discoveries are interesting enough for the history enthusiast. When some time had passed, however, and there was not much new to tell us, the media, in a nauseating frenzy, latched onto the discovery that Richard III had roundworms. You might think it was the greatest scientific discovery in the world. Or in reality, the fact that with the absence of any new discoveries that were actually interesting, they were clutching at straws. Roundworms indeed.

Last week the announcement that genomes of King Richard III and one of his family’s descendants, Michael Ibsen, are to be sequenced was met with general approval from the media. What will the genome sequencing teach us? The process could reveal his hair and eye colour, his susceptibility to conditions including Alzheimer’s disease and diabetes, whether he was lactose intolerant, and whether the scoliosis that contorted his spine was genetic.

“The aim is to shed new light on the ancestry and health of the last king of England to die in battle, and provide a complete archive of information that historians, scientists and the public will be able to access and use.” said the University’s official press release.

This also means a new sample has been taken from Richard III’s remains. Dr. Turi King, who is leading the study, told us “Unfortunately I can’t use the original results as that was targeted analysis, so I’ve taken another sample but have obviously kept it to a minimum. I don’t anticipate needing to do any further sampling.”

Any residue from the samples will be returned to his remains and reburied with them. Dr. King will of course treat Richard’s remains with care. However is this genome sequencing really necessary? Is there a burning need to know if Richard was lactose intolerant? And does the university have the right to take more samples without consulting his descendants?

Historian and genealogical researcher Dr. John Ashdown-Hill, the man responsible for discovering the mtDNA sequence of King Richard III and a founding member of the Looking for Richard team, told us “what now seems to be planned is simply to utilise Richard’s remains for general scientific research, making his genome sequence “available” for others to study as research material in perpetuity. But Richard is not a lab specimen or an unknown individual (although he is apparently being treated as both). He is a member of the royal family and a former head of state!”

The public outcry and the intervention of the House of Lords saw that little Anne Mowbray was reburied within six months, before scientific research on her remains was completed. One wonders what the late Lord Mowbray would think of the treatment of an anointed King of England as a lab specimen. Why was Anne Mowbray’s case different? Richard III also has living descendants.

The Plantagenet Alliance is a group of 16 collateral descendants of Richard III, descended from his brothers and sisters. They maintain they they are “his Majesty’s representatives and voice.” They have challenged the UoL’s right to have the remains of Richard III in their custody.

“I feel quite unhappy that people think the university did something incorrectly, because we followed normal practice on the exhumation of many, many burials,” said Richard Buckley. And the university have not done anything wrong in terms of legally following the standard procedures outlined in the exhumation licence. But what the judicial review next month will decide is whether the procedure that led to his remains being exhumed in Leicester and the decision to reinter them at the city’s cathedral was conducted correctly. The Looking for Richard team has told us they think the Ministry of Justice mistakenly granted the licence to the University of Leicester and that the licence should have gone to Leicester City Council, the landowner with whom Philippa Langley made the original agreement that would entrust his remains to her care. The Plantagenet Alliance insists that as his living descendants, once his remains were identified, they should have been consulted on his re-burial.

While we wait for next month’s judicial review, the university still has Richard’s remains in their custody. There is no certainty that the outcome will ensure he is removed from the University of Leicester, nor that the university will not decide they want to carry out more tests if he remains in their custody for another lengthy period while the battle over his burial place goes on.

“We are talking about royal remains,” Dr. Ashdown-Hill told us. “No other royal remains in England have ever been DNA tested, and no-one would think of attempting such a thing without royal permission. Therefore surely, in the case of Richard III, similar permission should be required in order to conduct extensive genetic testing, based on pulverising bone or tooth samples, of an anointed king.”

Queen Elizabeth II has steadfastly refused all exhumation requests of people buried on her properties. One of the most popular ‘candidates’, in the eyes of the public, would be the remains in Westminster Abbey thought to be the that of Edward V and Richard of Shrewsbury, the ‘Princes in the Tower’. Recently a request that a royal family member, Henry VIII, be exhumed, was made, in order to test his remains for Kell positive blood type, so his tyranny could be “explained”. In truth, what would these results really explain? The question of ethics is always pushed to the limit by science, in the name of knowledge. But we must ask the question, is this hunger for answers at the expense of disturbing the dead truly ethical?

King Richard III is one of history’s most polarising figures. The reaction after he was identified may have surprised the general public, but there is nothing surprising about it. People apply the same admiration towards their favourite celebrities, or authors, or sports stars, living or dead. The fact that many of the public feel a sense of ‘ownership’ towards Richard III goes far beyond the fact that he was a King of England. He is one of history’s underdogs. He has his own historical society with branches all over the world that are intent on rebuilding his reputation. He has a vast, volatile and ardent online fan-club. It has now been discovered he has living collateral descendants, and they feel that they are family.

Should The Last Warrior King now be known as The Unburied King? There is a misconception that the facial reconstruction caused Richard III to ‘suddenly’ have a face, and this has sparked the voracious public interest. But King Richard III has long had a face. For those who admire him, for those that study him, for those that are interested in his life, and for those that now know they descended from him and feel an ever stronger sense of kinship, he has also long been a person. Not a curiosity or a pile of bones. He was a King of England. A public figure. So perhaps it is time a decision was made in the interest of the public, not in the interest of the city and the state, and not in the name of science.

21/02/14 Update: Anyone concerned about further tests being imposed on the remains of King Richard III can voice your protest via these E-Petitions: UK Residents or Worldwide.

20/02/14 Correction: The original article stated the eye colour on the facial reconstruction was brown.