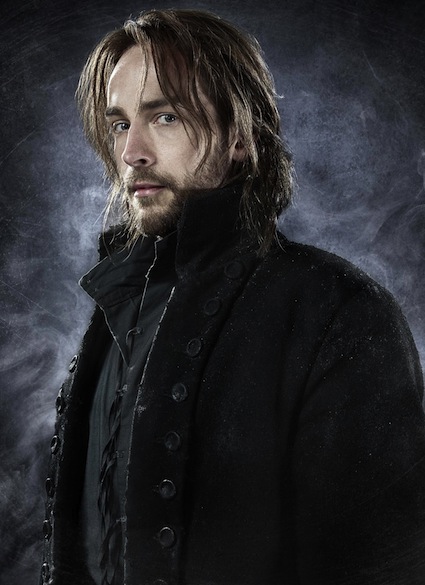 In Robert Orci and Alex Kurtzman’s Sleepy Hollow Ichabod Crane is a British Officer who joined the American rebels under General George Washington to battle the English colonial powers, elements of which proved to be in league with demonic forces, including The Four Horseman, who are attempting to bring about the Apocalypse.

After a battle with The Horseman, Ichabod is unknowingly put into a sleep and hidden underground by his gorgeously gothic witchy wife, Katrina. He wakes up some 200 years later, in contemporary Sleepy Hollow and finds the battle against the demonic forces continues. After the beheading of Police Captain Corbin by the Headless Horseman, Crane joins forces with Sleepy Hollow police Lieutenant Abbie Mills, whom he addresses as Lef-tenant.

Despite being buried for 200 odd years, Ichabod’s 18th century frock coat, trousers and puffy shirt are still intact, and no one seems to have taken the time to take him shopping for a modern suit. Well, why would you? He’s so romantically, handsomely gothic in his anachronistic outfit. Ichabod also sports a delightful English manner of speech, with a charming archaic turn of phrase, and a bemused, arched eyebrow, raised at the highly dubious foibles of the modern world. He readily adjusts to the modern world, brought up to speed using the traditional method of a TV watching montage, however, and despite frequent usage, no one seems to take the time to to correct him on the modern American pronunciation of “Lieutenant”.

A female lieutenant. In whose army?

You’ve been emancipated, I take it?

Okay. I’ll play along here. I am a black female lieutenant for the Westchester County Police Department. Do you see this gun? I’m authorized to use it. On you.

Lieutenant means second in command, or one who holds the place of the commanding officer when that officer is away or no longer able to command. Although with the same spelling, and with the same origin in the French, from lieu, meaning “place” and tenant meaning “holding”, since around the time of the American Revolution British and American pronunciation has diverged.

According to the Oxford English Dictionary,  leuf is a variant spelling of lieu, tracing the pronunciation back to its Old French and Middle English usage around the 12th century shows that both the English lef-tenant and the American lew-tenant were both in use.

After The American War Of Independence, waged over a 2% taxation on wealthy traders and land owners rather than, as Sleepy Hollow asserts, against mad King George III and his demonic allies, there was a strong social movement for the United States to differentiate itself culturally from the old order. Noah Webster, who published his first dictionary in 1806, produced the first comprehensive American Dictionary of the English Language in 1828, also wrote and published many of the first American spelling, grammar and school readers.

Webster’s first dictionary was filled with the zeal of a language reformer, and applied both aesthetics and logic to the inconsistencies of the English language, attempting to spell words closer to the way they sounded. He also resented that American schools, in post-revolutionary America, were still filled with British textbooks. Some of the changes in his first dictionary A Compendious Dictionary of the English Language, took things a little too far, words such as ake instead of ache, cloke instead of cloak and wimmen instead of women, did not take root with the American public. Other simplifications, jail rather than gaol, mask instead of masque, music instead of musick, dropping the u from words like colour and humour, changing the double l at the end of verbs like travel and cancel were taken up by the American public, and many changes found their way back to mother English as well.

So, when Ichabod Crane says leftenant instead of lieutenant, the simple answer is, it’s the British pronunciation. Why Americans say lewtenant instead of leftenant is because of reformers like Noah Webster, who wanted not only to iron out the inconsistencies in English spelling and grammar, but also to create a distinctive, American language. Why no one has corrected him is simple as well. A handsome, quirky, well mannered gothic hero who talks in poetically archaic English and wears a romantically puffy shirt is absolutely more interesting than someone who talks like everyone else.