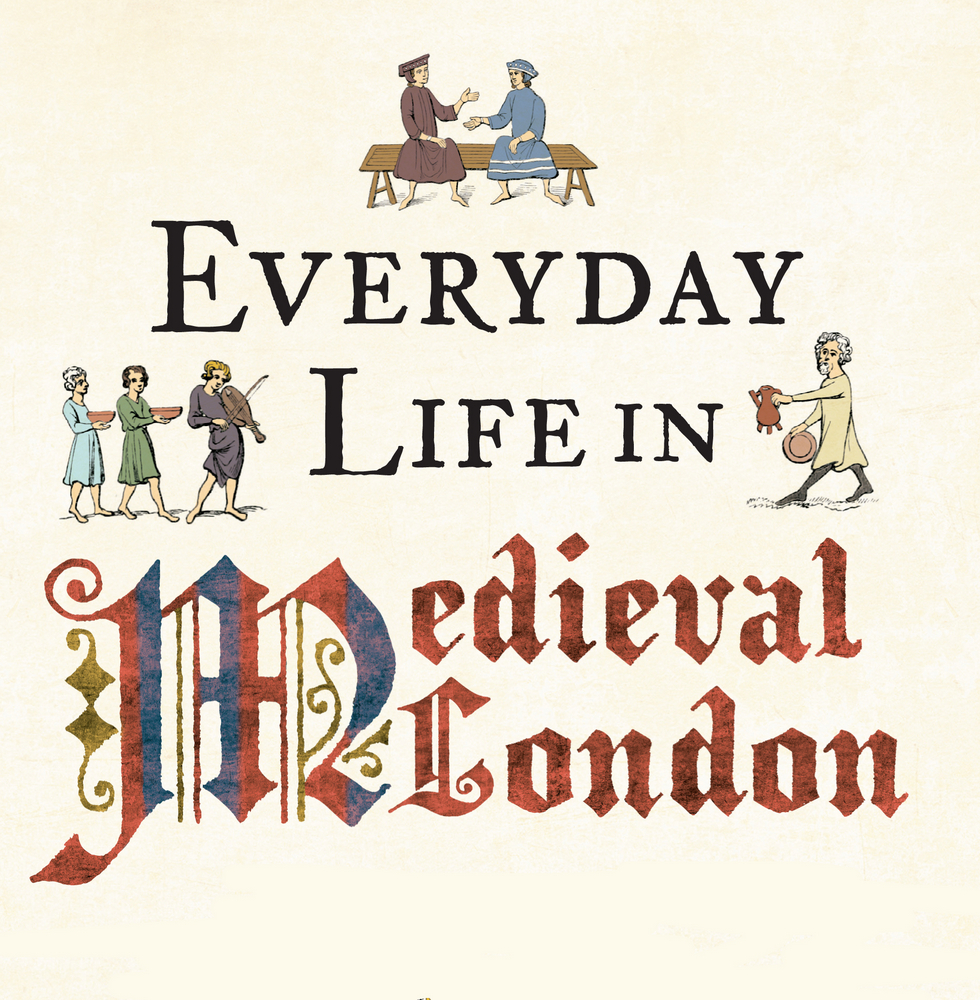 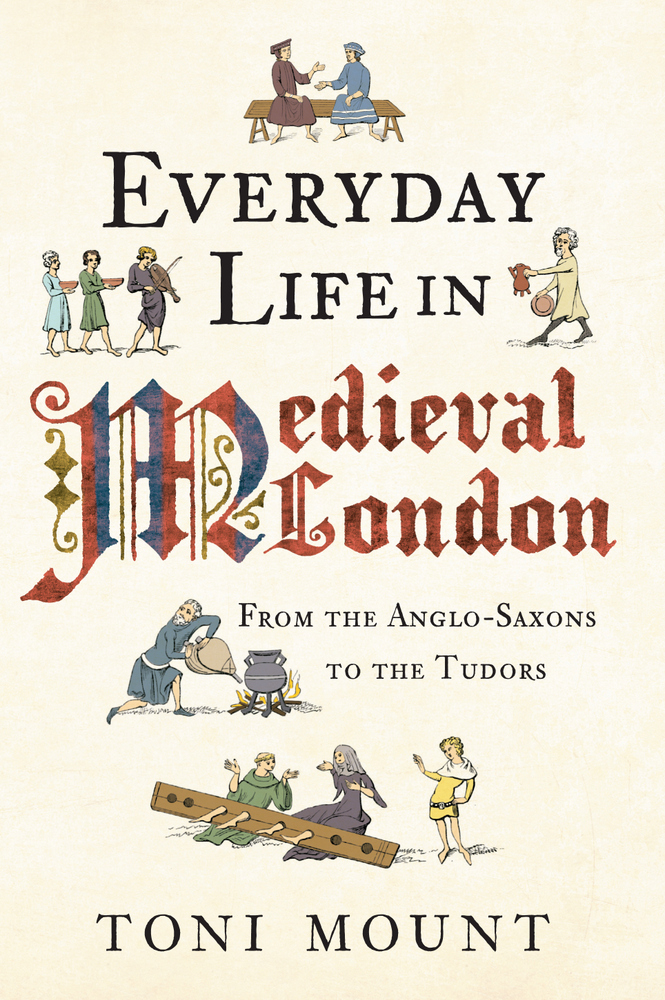 Have you ever wondered what shopping at a medieval market was like? It was sometimes unconventional – you could get your honey, soap, butter and horseshoes from the fishmonger. While this particular fishmonger was prosecuted for selling dairy products alongside his seafood products, his punishment might not have been as humiliating as London vintner John Penrose’s. The unfortunate John was found guilty of selling bad wine and as punishment had to drink a large measure of his substandard wine before the rest was poured over his head. The baker Robert Porter got off a bit lightly – Robert was punished for selling underweight penny loaves. He was put in the pillory in Cornhill for an hour with the loaf and the piece of iron he inserted into it to make up the weight hung round his neck.

The medieval housewife’s exhausting day of cooking, cleaning, brewing, raising the children and running the household inspired The Ballad of the Tyrannical Husband. Not to be outdone  15th century poet John Lydgate mourned that wedlok is an endles penaunce  in his Payne and Sorowe of Evyll Marriage. Londoners might have embraced the new printed books but they weren’t about to abandon their sports for more scholarly pursuits. The efforts of Edward III, Edward IV and Richard III to ban football were all but ignored.

Toni Mount’s delightful Everyday Life in Medieval London is brimming with fascinating anecdotes about London’s citizens over the centuries; bringing a unique and colourful insight into life in the Middle Ages. Toni joins us to discuss the lives of ordinary folk in medieval London.

Is there any particular period you were drawn to when you were researching this book?

My particular favourite period has always been the fifteenth century mainly because my love of history began with Richard III [b.1452 – 1485] thirty odd years ago and I wanted to find out what life was like for ordinary people during his lifetime.

You examine quite a few archaeological finds in your book, what do you think have been some of the more significant finds and what do they teach us about medieval life?

Archaeology can be a wonderful window into history, just touching things that others touched centuries ago makes a real connection with them. Finds like the Staffordshire hoard are quite incredible but sometimes it’s the mundane objects that rewrite history, like the fifteenth-century banana skin found preserve in a muddy deposit at Southwark. It was previously thought that bananas weren’t known here until the mid-1600s.

We don’t read a great deal about childhood in medieval times, what was a typical day like for a child like in medieval London?

You’re right, not much seems to have been written about medieval childhood. One reason may be that it was short: by the age of four or five, children would be working in the fields, scaring crows, fetching water. Most of our info tends to be negative stuff, from coroners’ rolls, about how children died, so you have to turn it around to see what they were doing at the time and then think about other children doing the same without the awful consequence – fishing, climbing trees, playing games of derring-do.

Both men and women of the working classes were expected to make a living, so what sort of employment prospects did they have?

As you say, everyone had to make a living and women were earning money just like the men – but always on lower wages, even for the same job. There are records showing women working as blacksmiths, bell-founders, jewellers, book-binders, butchers, bakers, brewers… the list covers every job but being a priest.

The daily life of a housewife seems utterly exhausting, just how central to the household was the mother of the family?

The housewife and mother was pivotal, not only to family life but to the family economy. The guilds often recognised this fact, allowing a widower to take on an extra apprentice to cover the loss of his wife’s contribution to his trade or craft. If he had young children  to be cared for, he usually married again as soon as was decently allowed – a home without a woman would have been difficult to run and was probably a rarity.

We often hear that medieval people never ate fresh fruit or vegetables but you discuss various fruits that were consumed on a regular basis – what was a typical diet like for a working-class family?

The working class diet would have been the basic bread and ale, with cheese, occasional eggs, bacon and pork and dried or salted fish on fast days. Cabbages, onions, leeks, peas and beans were the usual veg. Fruit would have been only what was in season – apart from apples and pears which could be stored over winter. Wild fruits and nuts would have been picked for free from the hedgerows but raw fruit was always a bit suspect so it tended to be cooked.

What sort of entertainment might a family indulge in on their rare days off?

The church provided processions and festivals that everyone could join in. Any excuse for a knees-up: a church-ale, a bride-ale, a Whitsun-ale, wetting the baby’s head, etc. At harvest-time and Christmas, the lord of the manor was expected to provide a feast for his tenants and there would be a parish celebration on the day dedicated to the local church’s patron saint. Travelling players might pass through the village, actors [called mountebanks because they ‘mounted benches or banques’ to be seen as they performed], acrobats, jugglers, fire-eaters, musicians and singers. The local church choristers might do a turn and story-telling was always popular. Football matches, both riotous and dangerous, were a way of letting off steam, village versus village.

How important was religion and how did it impact everyday life?

Religion dominated everything: dietary requirements, medical treatments, the cycle of birth, work, marriage, more work and, finally, death… all overseen by the church. Everyone lived in fear of what horrors might await them beyond the grave and the church used that fear to dominate every aspect of daily life. On the other hand, it also provided the social welfare of the day: hospitals, care for the poor, shelter for the destitute and homeless, food for the hungry.

What sort of books were popular when they became more freely and economically available to the public?

What we would call self-help books were very popular, covering subjects from good manners, running the home properly, how to go on a pilgrimage (complete with useful foreign phrases and currency conversion) and how to play chess to instructions for healthy living, tips on falconry and hunting and how best to wage war. For those of a more frivolous frame of mind there were books like The Canterbury Tales and Le Morte d’Arthur, being sold as cheap paper booklets, a chapter at a time – for those who could read. Readers would oblige others by reading aloud; silent reading wasn’t common.

Can you tell us about your upcoming book Medieval Housewives?

My forthcoming, fully-illustrated book with live-action photographs and manuscript illuminations, Medieval Housewives looks at the role of women in the Middle Ages, from the poorest villager to the royal duchess, from the respectable merchant’s wife to the prostitute, from the business woman to the nun. The church always had difficulty with the way women should be regarded: as pious sisters of the Virgin Mary or sinful daughters of Eve, and this was reflected in the way society treated them. I’m sure most women, then as now, fell somewhere in the middle: hard working, anxious for their family but on the lookout for a little light relief sometimes. These are the stories of real women, the unsung heroines of the medieval age.

Read more: History Salon: The Survival of the Princes in the Tower 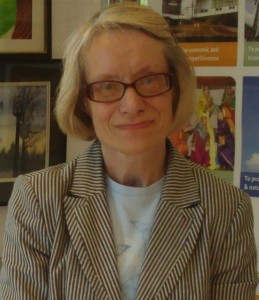 I’m an author, a history teacher, an experienced speaker – and an enthusiastic life-long-learner. I’m a member of the Research Committee of the Richard III Society and a library volunteer where I lead a Creative Writing group. I attend history events as a costumed interpreter.
I earned my research MA from the University of Kent in 2009 through study of a medieval medical manuscript held at the Wellcome Library in London. My BA (with First-class Honours) and my Diploma in European Humanities are from the Open University. My Cert. Ed (in Post-Compulsory Education and Training) is from the University of Greenwich.  Recently I completed a Diploma in Literature and Creative Writing with the Open University. I’m currently studying a range of modules on contemporary science and technology also with the OU.
I have written and published books including The Medieval Housewife and Women of the Middle-ages, and Richard III King of Controversy plus books on Mrs Beeton and Victorian women doctors.
My latest book for Amberley Publishing covers the history of London from 500 – 1500 AD Everyday Life in Medieval London was published in March 2014, and now I’m working on another two medieval books for Amberley for later this year.
I’ve been happily married for nearly 40 years and have two grown-up sons. 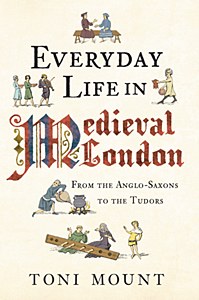 Everyday Life in Medieval London: From the Anglo-Saxons to the Tudors by Toni Mount, published by Amberley Publishing 2014.

Our capital city has always been a thriving and colourful place, full of diverse and determined individuals developing trade and finance, exchanging gossip and doing business. Abandoned by the Romans, rebuilt by the Saxons, occupied by the Vikings and reconstructed by the Normans, London would become the largest trade and financial centre, dominating the world in later centuries. London has always been a brilliant, vibrant and eclectic place – Henry V was given a triumphal procession there after his return from Agincourt and the Lord Mayor’s river pageant was an annual medieval spectacular. William the Conqueror built the Tower, Thomas Becket was born in Cheapside, Wat Tyler led the peasants in revolt across London Bridge and Chaucer’s Canterbury Tales was the first book produced on Caxton’s new printing press in Westminster. But beneath the colour and pageantry lay dirt, discomfort and disease, the daily grind for ordinary folk. Like us, they had family problems, work worries, health concerns and wondered about the weather.