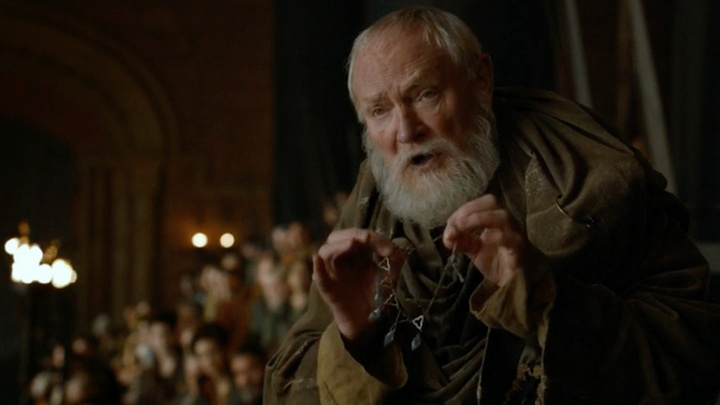 Maester Pycelle with the necklace recovered from Ser Dontos' corpse

Game of Thrones Season 4: ‘The Laws of Gods and Men’ A Thousand Lying Whores

I was pleased to see one of my favourite characters, Davos Seaworth, get a chance to shine with a compelling speech in The Laws of Gods and Men. We’ve gotten to Braavos rather early, and Tycho Nestoris is introduced in the Iron Bank itself. Sans purple hat, unfortunately. Still I am wondering when Stannis is actually going to get to the Wall. How much of the story arc at the Wall is the show actually going to retain?

I have mixed feelings about this new Yara/Theon/Ramsay subplot. Yara gives a really wonderful speech before they go in to break Theon out of his prison, yet upon attempting to release him Theon resists, and Yara and her men are foiled by Ramsay. It’s fairly obvious what they are trying to get across of course, that Theon is now ‘Reek’, and wholly Ramsay’s creature. I have lingering problems with Ramsay, mainly that Iwan Rheon is far too handsome to play Ramsay and although he gives a great performance each episode it is fairly standard ‘serial killer’ fare script-wise. I rolled my eyes at ‘Ramsay the untouchable swordsman’. And as for Yara and her Ironborn being afraid of the hounds? They are armoured and armed with swords. I couldn’t quite catch if they outnumbered the dogs but it is difficult to picture Asha/Yara fleeing from hounds, however vicious they are.

The show Yara is a lot softer than book Asha. Oddly I don’t really like or care a lot about Asha in the books (see here), but I do like the sisterly Yara of the series, in fact I like her more than Asha in some respects. She’s not cheeky like Asha but I like her serious nature and there is a hint of regret for her treatment of Theon. This episode’s “My brother is dead” moment was especially poignant.

This is one of my favourite Peter Dinklage moments from the whole series. His performance during his farcical trial was superb, as usual. What I really enjoyed was his line about being on trial for being a dwarf. This alludes to what Tyrion really faces in the books, something that is not explored heavily in the television series. But there are two things in the trial that really stood out, and the first of those was Shae.

Dan and Dave wanted to ditch the Shae we know from the books, the selfish gold-digger, and give her some more emotional depth. The scene where Tyrion sends her away for her own safety, by lying to her that he doesn’t care for her, was heartbreaking. And nothing like book-Shae. So I was curious to see how they would handle her testimony at the trial. It seems they’ve gone for a simple revenge plot, which would work nicely. But it is a little ambiguous.  Sibel’s performance was interesting, some of Shae’s lines seemed slightly rehearsed, at times she looked like she was trying to convince herself as well as the jury. We still couldn’t be 100% sure she hasn’t been coerced by Cersei and Tywin or if she is acting out of pure revenge. Then there was the implication of Sansa, something Sibel apparently didn’t agree with, arguing with Dan and Dave to take that part out. They refused.

“I had really big problems with that, with this line,” Sibel said in an interview “When I read that, I thought, ‘She can’t say that.’ I think Shae really loves her and she’s said, ‘I would kill for this girl.’ She’s saying one line, and I thought, ‘Ugh, can’t she just say Tyrion did that?’ Or something like that? It’s really hard, so I tried to understand why, of course, why she’s doing it. As I said, she just got wounded now, and is just boxing around.”

This sympathetic version of Shae could pose a rather serious problem, however. How are television viewers going to forgive Tyrion for his actions against a woman who genuinely loves him? Unless Tyrion is also duped. The reaction will be interesting to see.

In Breaker of Chains, Baelish takes the necklace Sansa was wearing at the wedding and smashes a jewel to show her it was “paste”, proving Ser Dontos’ treachery. He then tosses the necklace into the burning boat where Dontos’ corpse is lying. I was wondering if the necklace would show up again, and here it is. In some slightly dubious story-telling Dontos’ corpse has made it back to King’s Landing with the necklace completely intact. It’s doubtful the thing wouldn’t have a mark on it or that Baelish would be stupid enough to leave a trail. Unless, of course, he is doing it purposely. Are we getting another hint here? Is Sansa going to be further implicated because of the necklace, or is Baelish setting her up? George doesn’t give much away in this video.