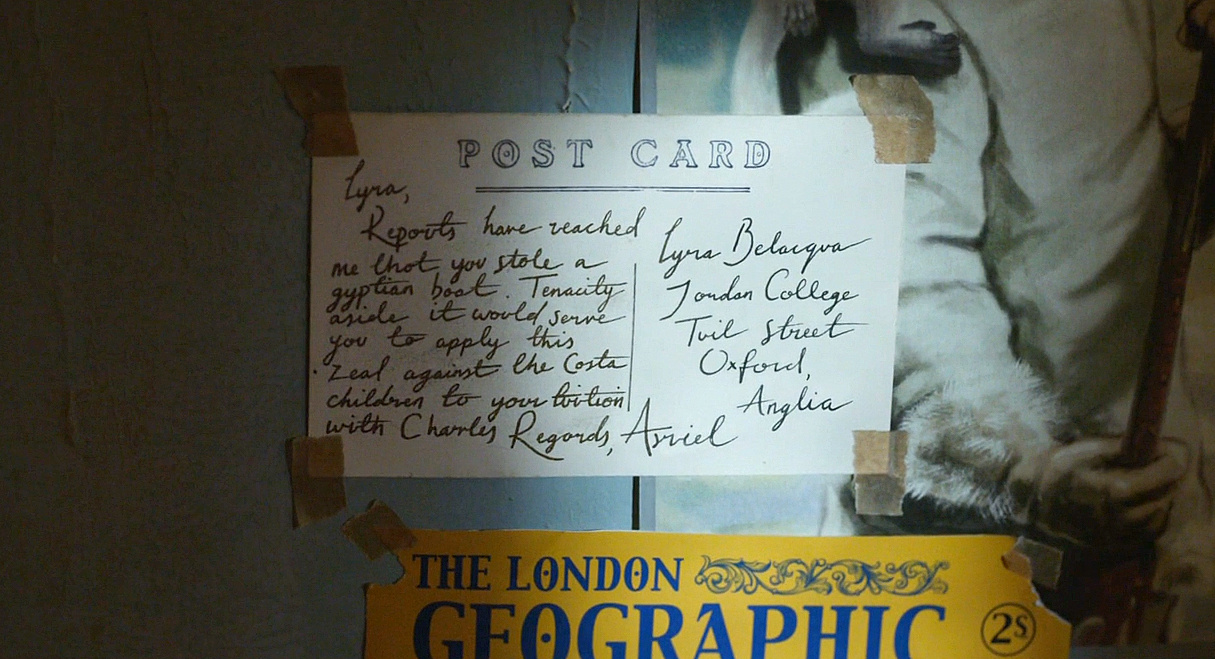 If, as a book fan, you had any reservations about His Dark Materials, the opening episode Lyra’s Jordan should have succeeded in smashing them. I had been completely confident about the quality that BBC and Bad Wolf would deliver but had some mild misgivings about departures from the text. Last night Lyra’s Jordan demonstrated that everything new has been seamlessly incorporated into the text to deliver a powerfully immersive introduction to Lyra Belacqua’s world. And we know our Lyra’s not going to be taking a backseat to the adults with Dafne Keene’s name appearing above them all in the commanding opening credits. Accompanied by the powerful score, even the credit sequence manages to promise that the text will be treated with the gravitas it deserves.

It turns out my suspicions were correct and Jack Thorne has given Lord Asriel more screen time. The opening scene of the film is taken from The Book of Dust Vol I: La Belle Sauvage, with Philip Pullman’s special permission. Already the viewer is given a secret to hold, there is no way Lyra could remember Asriel carefully carrying her clear of the water, desperate to get her to safety. James McAvoy brings a human aspect to Asriel that book readers waited quite some time to witness, along with the aggressive energy that drives him. It makes the scene where Lyra begs her uncle to stay and spend time with her and their wrenching parting all the more poignant. The pity and grief that flashed through Asriel’s eyes, for the briefest moment, allows the viewer to understand a little more of Asriel early on, much earlier than the book reader who saw him only from Lyra’s perspective, a much-admired but distant and emotionally neglectful relative.

Jordan College is a grittier and dustier and more lived-in version than we have seen on-screen before. Lyra’s only concession to feminine dress, a well-worn pinafore, is paired with sturdy boots perfect for climbing rooftops. Dafne Keen and Lewin Lloyd are carefree and natural, an equal pairing and easy friendship. Pantaliamon, at his most appealing as a white mink in this episode, interacts perfectly with Lyra. The interactions between human and dæmon so far are careful and thoughtful. The first scene after the credits show Pan nodding off along with Lyra during her lesson with Librarian. Pan is his usual overly-cautious self but always quick to seek contact with Lyra to comfort her when she needs him without Lyra having to verbalise. Asriel’s dæmon Stelmaria is even bigger than the previous screen incarnation, cleverly mirroring Asriel’s general disregard for those around him in the pursuit of his goals. Thus far the dæmons, crucial to the story, have been treated with great attention to detail in terms of look and animal form.

The Gyptian ceremony was an interesting addition to the text, beautifully thought-out as a representation of Gyptian culture. In the ceremony a ring was made with silver donated from all the Gyptian families and presented to Tony Costa, a teenager whose dæmon has settled into her final form. This demonstrates the close-knit ties between Gyptian families, who are water-travellers and traders. Whilst loosely inspired by cultures such as the Romani people they are not actual representations of them, but a representation of the working classes in Lyra’s world. There are wealthy Gyptians, as well as poor, they are a multi-cultural group with names of various origins and choose to live on the fringes of society. That Pullman depicted them as more honourable and more trustworthy than much of the upper-class in Oxford is, of course, telling. The incandescent Anne-Marie Duff plays the beloved Ma Costa. Thus far there has been no display of her superior wealth to the other Gyptians. Perhaps visually portraying the Gyptians as more or less equal in terms of wealth will maintain the air of closeness amongst the Gyptians that is difficult to find outside their community in Oxford. It also appears that Tony Makarios’s character has been merged with that of Billy Costa’s again, for brevity, a decision that follows both the play and the 2007 film, but I will discuss that further under book spoilers.

You also could not watch Lyra’s Jordan without marvelling at the wonderful cast and performances. Every single character is well-realised with even Ian Gelder’s small role as Lyra’s tutor, Librarian Charles, touching one’s heart with his love and concern for his young charge. James McAvoy and Ruth Wilson’s performances are simply thunderous, the latter’s first appearance accompanied by the strains of Darth Vader-esque score as she strides through the halls of Jordan towards her purpose. Ruth Wilson oozes the easy charm and confidence her character requires and, just as importantly, the sexuality that Mrs. Coulter exudes, sorely lacking in the previous repressive screen incarnation.

Wilson’s entrance is preceded by our introduction to the Magisterium, the all-powerful church that controls the state. It has been given an update from traditional Christian dress and imagery used in The Golden Compass with a slickly modern authoritarian feel flanked by Nazi-like imagery, a suitable interpretation of the evils of a church combined with State. Without touching too much on other reviews, it must be noted that the majority of negative media reviews have come from American publications and perhaps we have to give Sam Elliot some credit for baldly stating years ago that “The Catholic Church happened to The Golden Compass, as far as I’m concerned.” This time it is far less likely they will succeed, but perhaps the effort is still there.

One of the first and major changes is Lyra being aged to twelve and a half. She appears at six months old at the beginning of the episode, which then cuts to ‘twelve years later’. They could alter the timeline from here ensuring Lyra is a few years older, as there seems to be some conjecture that Lyra will be sixteen by the final season (see my pre-show discussion). However, Lyra was twelve at the end of The Amber Spyglass and trying to age her to sixteen is just completely at odds with the story which focuses on children, and not teenagers. There is more to be revealed on that front.

It is evident they are focusing on a theme of truth and trust throughout the series, with Lyra initially refusing to take the alethiometer from the Master, telling him “I don’t want secrets”, another obvious departure from the text where she accepts it willingly. Lyra also tells the Master that as it is her uncle’s he wouldn’t want her having it, revealing a little more about Lyra’s feelings about Asriel’s neglect.

The exclusion of Tony Makarios, again, is truly irritating. In some respects his scene gives the villain away earlier than the writers might like but that itself could have been altered. Then again, why should it? The reader knows who is leading the Gobblers. That Tony, who only has a small part in the first novel, is unimportant is simply not the case. His story is not transferable. Particularly to a Gyptian child, Billy Costa, who comes from a close-knit, wealthy family and is well cared-for. Tony’s mother is an alcoholic and while not uncaring, is unable to look after him. Unlike a typical tale of a drunken parent, Tony’s mother is treated with empathy.

She, poor drunken thing, will think he’s run away, and when she remembers him, she’ll think it was her fault, and sob her sorry heart out.

Tony is captured while he is out trying to earn some coins and steal food. The Gobblers target poor children and many are lured away simply by the promise of warmth and food, and the charming one who welcomes them. There are various allusions to class in the book that have been skipped so far. One is an uncomfortable interview between Lyra and Father Heyst, who asks her if she wouldn’t rather have “nobly born children” or other girls for companions and clearly frowns upon her friendship with Roger. Lyra is seemingly unaware of class divide and sees everyone as her equal. It is Tony’s tale, rather than Billy’s, tells us about the poor children who fall into the Gobbler’s trap because they are hungry and easy prey.

A little more on Tony in the complete spoilers section. 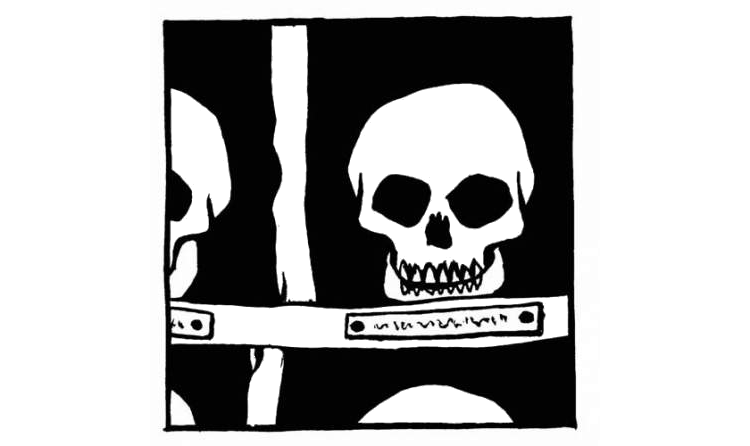 There is one last aspect of Tony’s importance to the story I would like to touch on and that is that we need to see the different experiences of children snatched by the Gobblers. Although Billy Costa survives in the books, the previous play and screen version have seen him meet Tony’s fate. So we lose that story. And unlike Tony, Billy comes from an important family and is missed by a large group of people. There is something altogether more important in Lyra saving Tony Makarios. She brings him back only to see him die but the vision of an eleven year-old girl screaming that she will tear the lungs from a group of grown men because they haven’t shown the deceased child the proper respect is deeply moving. In death she treats Tony with the same reverence she would show to a scholar. Perhaps it’s a reminder that we are all equal after death but for Lyra we are, when we are good, all equal in life.

Roger’s snatching has been shifted ever so slightly in the timeline, from before Lyra meeting Mrs. Coulter to just after. In fact it was just after Lyra asked Mrs. Coulter if she couldn’t take Roger North with them that he was snatched, obviously alluding to her having arranged it. This is an interesting alteration that will allow more of the manipulative aspects of Mrs. Coulter to shine, for Mrs. Coulter now has a means to trick Lyra into thinking she is helping her look for Roger, making Lyra even more grateful to her.

The Book of Dust Vol I & II

I was disappointed to see both Hannah Relf and Alice/Mrs. Lonsdale missing from the first episode. If they do get around to making a series based on The Book of Dust trilogy they have missed an opportunity to forge an important connection between the stories.

This isn’t related to the series directly but it occurred to me while watching the series preview that aired at the end of the episode. It indicated we will see Billy Costa return to his family and die from the trauma of being separated from his dæmon. Lyra flew into a rage when one of the Gyptians had taken the deceased Tony Makarios’s fish, the fish he had been hanging onto as a substitute for Ratter. Philip Pullman has shown us a very different side of dæmons in The Book of Dust, which was conceived shortly after His Dark Materials concluded, it makes me wonder just how long he has been planning the sundering of Lyra and Pantalaimon.

Next week: Episode 2 ‘The Idea of North’

Join our friends Travis and Richard for the Daemon Dust Podcast