Suckling pig in plum sauce, stuffed with chestnuts and white truffles. A man must eat

The Inn at the Crossroads : Recipes from Game of Thrones with Chelsea Monroe-Cassel

When Chelsea and Sariann started experimenting with recipes inspired from their favourite book series, A Song of Ice and Fire, they were probably not expecting George RR Martin to take any notice. George of course, likes his food, and he did notice. Now The Inn at The Crossroads has gone from a foodie blog run by two fans to the home of the official Game of Thrones cookbook, A Feast of Ice and Fire. We spoke to co-author Chelsea Monroe-Cassel about pesky pastries, singing squids and planning a Game of Thrones party (but not Walder Frey-style).

Why did you decide to start Game of Thrones themed food blog?

Sariann and I started the blog almost by accident. One night, we were trying to decide what to make for dinner. Since we both have a sweet tooth, we started with dessert: Lemoncakes. All of the descriptions in GRRM’s books sound so amazing that it inspired us to try making some, starting with what might be the most popular and well known food in the series. Although we weren’t quite happy with that first effort, the fact that we couldn’t find any Game of Thrones recipes online inspired us to start a blog of our own to share our experiments and progress. We were surprised and delighted when it took off, and it’s been growing ever since!

You take food featured in the Song of Ice and Fire books and create a modern recipe. How do you go about trying to replicate it?

First, I look at all the information in the original passage; sometimes it’s just a very brief description, like “steak and kidney pie”, but other times, Martin lists a number of the ingredients, which is incredibly helpful. The Sisters Stew is a great example of that. Because of his description, I knew it had to include crab, fish, saffron, pepper, and barley, among other things.

My next step is to look at where in Westeros the dish is being eaten or prepared. I take into account climate, culture, and even trade routes. The kitchens at Winterfell have a vastly different selection of ingredients than a kitchen in Dorne or Meereen, while King’s Landing is a central hub of trade, so it can have a bit of everything. Because Martin’s world is grounded in a kind of reality, I think it’s important to approach the food in a similar way. However, what he says is canon: since he never mentions tomatoes, I don’t add them to anything. Likewise, because he specifically mentions corn on the cob and spicy peppers, both of which are “new world” ingredients, I include them in recipes.

In terms of the actual recipes, most of the dishes in the cookbook and the blog are two part- a medieval recipe and a modern one. The medieval recipes can be especially challenging to work with because they often leave out information that is important for modern cooks, such as cooking time and temperatures. “Cook until done” is a popular and frustrating phrase. There’s a lot of recipe testing that goes on behind the scenes to make sure that the recipes work and are tasty; no recipe goes online that I’m not happy with, which can mean a long period of perfecting them!

Is there any food from a Song of Ice and Fire  that defeated you?

There were a number of dishes that we couldn’t make. In most cases, this was due to the outrageous expense or illegality of the ingredients. One interesting thing I learned from this is how widely opinions and laws differ from region to region and country to country. Swan, for example, is prohibitively expensive where I live, but can be hunted in other parts of the States. Horse meat is illegal in the US, but common in many other countries.

Some blog readers joke that Martin was throwing down the gauntlet with some of his dishes in the most recent book, A Dance with Dragons. Some of the outlandish dishes in that book included spiny grubs, lacquered ducks, roasted larks, singing squid, and so on.

With medieval conceptions of sweet and savoury so different to ours, what are some of the stranger combinations you come across in your research?

There have been a number of strange combinations of ingredients throughout the book and blogging process. Many medieval dishes heavily used ingredients that we might not consider pantry staples today, such as vinegar and almond milk. The meat dishes were often paired with sweet elements rather than savory, and there was a LOT of butter, cream, and eggs.

What has been your favourite recipe to create?

I’m a sucker for all of the desserts. I think my favorites to eat have been the medieval Arya Tarts, the modern Honeycakes, and the medieval Applecakes. I had a lot of fun creating the Cream Swans recipe, as well as the Sugar Skulls filled with Custard, although the latter is still giving me some trouble!

And your least favourite/most difficult?

The medieval strawberry pie was a surprisingly tough dish to crack. Each version resulted in a weird and unappealing tart that left much to be desired. I finally found a really simple recipe that gets a splash of port sprinkled over it. There are also some free-standing meat pies that I can’t get to stand up, and some soups that I think GRRM just made up to vex me. I’ll keep trying, though!

Tell us about your cookbook, A Feast of Ice and Fire: The Official Game of Thrones Companion Cookbook.

The cookbook was the ultimate reward for running the blog. George RR Martin heard about the blog, and mentioned it to his publishers. They got in touch, and within a year the cookbook was published! It was amazing. Working with GRRM’s publisher and editor means that the cookbook is official, filled with gorgeous photos and quotes from the books, and a foreword from GRRM. Being able to contribute to the world of Westeros and enable fans to take a few steps closer to their favorite characters is a dream come true.

I’ve also created a Game of Thrones Party Planning Guide, which has ideas on how to decorate, make invitations, party games, and much more. That should be available for download on multiple e-readers by the start of the next season. 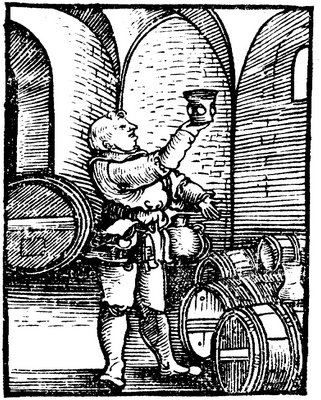 You’ve also launched a companion site, a Game of Brews. Most of us know about beer, wine and ale, have you come across any interesting or unusual medieval brews in your research?

So many! I started to dabble in brewing as a part of Inn at the Crossroads, but the hobby quickly outgrew that blog. Many historical brews have collections of ingredients that I would have never thought to put together, but that make for an excellent mead or wine. There are beers without hops, meads with a huge range of herbs and spices, apple wine with beetroot, floral infusions, and many more. Brewing is a blast, and so much easier than one might expect!

Thanks so much for the interview! 🙂

Visit Chelsea and Sariann at The Inn at The Crossroads and A Game of Brews.

Buy A Feast of Ice and Fire

All pictures courtesy of  Inn at The Crossroads.