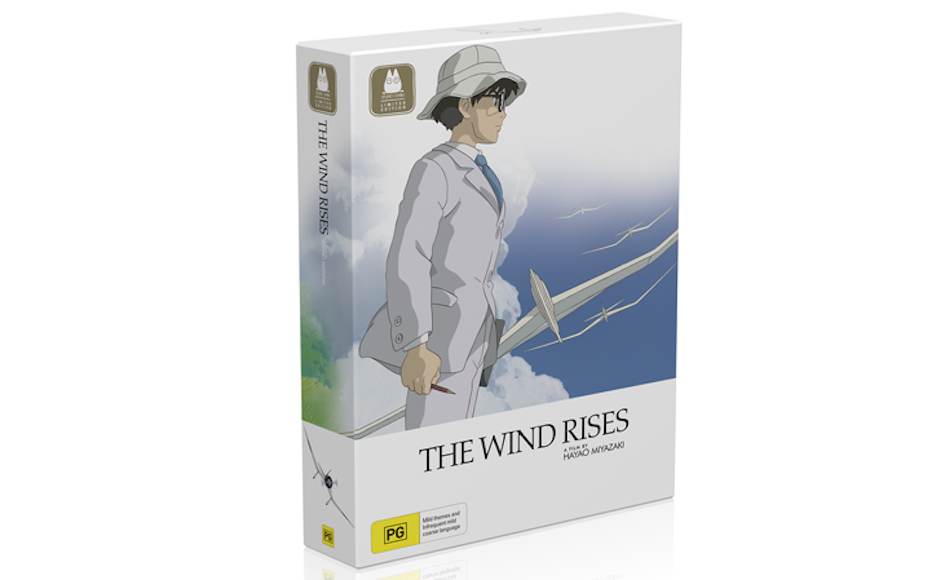 The Wind Rises is the soaring story of a young man’s dream of flight, an epic historical drama that retells the life of Jiro Horikoshi, a brilliant aeronautical engineer in the golden age of flight, a pioneer in Japanese aviation, whose fascination with building flying machines was tempered by the knowledge that some men would use the machines he created for evil, but the dream was worth pursuing nevertheless. It is a story of romance, adventure, tragedy and regret, in service to a great dream, against a momentous historical backdrop.

The set includes Blu-Ray and DVD of The Wind Rises, a DVD of the 2014 documentary The Kingdom of Dreams and Madness which looks at both the life of Hayao Miyazaki, the creative process and a year in the life of Studio Ghibli as they finish and prepare to release two films, The Wind Rises and The Story Of The Princess Kaguya.

It also includes The Art Of The Wind Rises, a 224p glossy hardcover book published by Viz Media that presents an in-depth look at the ideas, the sketches, the concept and finished art, the production, and the processes of making the film, it includes the English language script and features interviews and discussions with the people behind the film.

In addition there is a set of exclusive colour postcards featuring scenes from the film, and a finely detailed commemorative bronze medal, only available as part of this strictly limited edition, all packaged in a beautiful slip case. In many ways a set like this is not only something fine and exclusive to own, but it also acknowledges and honours the inspiration, the genius, of the artists behind the work.

If you have even a passing interest in the art of animation, this provides and incredible insight, and to help you further appreciate this set, we present a most ceremonious unboxing in the video below…

The Blu-Ray is all regions, the DVD is region 4, and you can watch either the original Japanese language version with English subtitles or an English language dub featuring a hugely talented cast including Joseph Gordon-Levitt, John Krasinski, Emily Blunt, Martin Short, Stanley Tucci, Mandy Patinkin and William H Macy. Bonus features include a look at the voice talent behind the microphone, Japanese trailers and TV spots, alternate angle storyboard images, and the special announcement of the completion of Hayao Miyazaki’s final, and perhaps grandest film.

This brilliant Limited Edition package is only available at the following locations. There are strictly limited numbers, so don’t miss out. Currently only available through Gametraders, Sanity and JB Hi-Fi in Australia, and Mighty Ape in New Zealand.

Madman Australia have also released limited Anniversary Editions of two of Miyazaki’s other landmark works of fantasy, Kiki’s Delivery Service and Howl’s Moving Castle. Stay tuned for further unboxing ceremonies. Courtesy of Madman we will also be giving away 3 Studio Ghibli Blu-Ray Packs and 3 Studio Ghibli DVD Packs. Come back soon and check our other articles on Studio Ghibli and Madman to learn how you could win.