Really Bigger on the Inside

Last time we saw the exterior dimensions of the TARDIS malfunction she was a tomb housing the Doctor’s timeline. This time she is thankfully just having her energy drained by some aliens and has gone into a defensive stance, finally shrinking to a tiny closed box when she enters siege mode. But the images of the full-sized Doctor gesticulating from a purse-sized TARDIS were delightful.

They’re in the Walls… 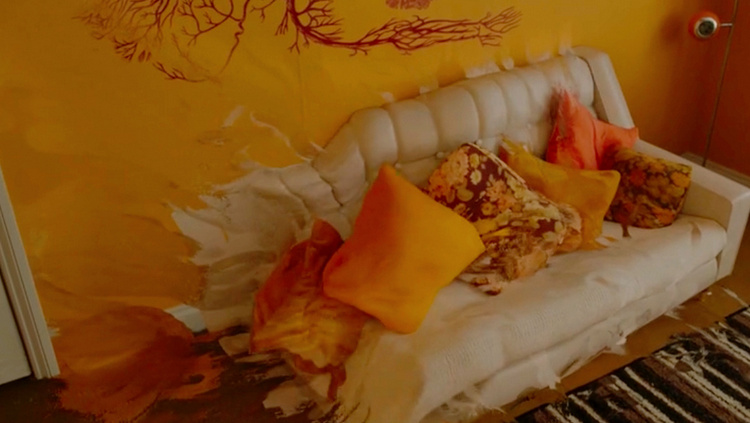 Seeing the full span of the mural through Clara’s eyes and the realisation when you see the feet at the end of it that it was what was left of poor old PC Forrest was gut-wrenching. Flatline gave us a classic horror theme – monsters in the wall, monsters you can’t see, and monsters you can’t keep out, but have to keep running from…

I really had to point out this amazingly detailed 1970’s decor. The visual style of the episode was superb, a gritty urban setting with it’s depressing estate buildings, derelict factories and abandoned rail lines added to the overall unsettling and grim feeling.

As much as the Clara/Danny soap opera has been annoying me over the last few episodes I did get a kick out of this one. It is no mean feat avoiding scary two-dimensional monsters, using the sonic and crashing through a window on an egg seat with a teenage boy in tow all while managing to keep hold of your phone and assure your boyfriend everything is peachy. Admittedly not very well. But she put in a good effort.

So now we know you either have to be a genius (The Shakespeare Code), a small boy who doesn’t believe the Doctor is a responsible adult (Christmas Carol) a horrible crotchety old guy with a severe lack of imagination to defeat the psychic paper.

The Boneless were some of the most innovative creations we’ve seen to date, monsters with only two dimensions seeking to steal their third dimension from humanity. And what makes them even creepier is we watch them evolve over the episode. First they’re unseen, then they’re a sinuous, thriving mass flowing from the walls, then they escape from a mural, lurching and flickering between the second and third dimension, all the while becoming clearer, becoming stronger and a greater threat.

It’s not very often we see the TARDIS with this much presence – she usually wheezes her way on screen. Watching her hurtle towards her enemies and blast them back was awesome. And then…

This is what Peter Capaldi always pulls off so elegantly, and while I loved both of his boyish predecessors, they don’t quite capture all of the mighty fury that the Twelfth does. (admittedly the last time we saw David Tenant make one of these speeches he was addressing an adorable bunny).

You are monsters. That is the role you seem determined to play so it seems I must play mine…the man that stops the monsters…
I’m sending you back to your own dimension. Who knows: some of you may even survive the trip. And if you do, remember this: you are not welcome here! This plane is protected! I am the Doctor!

This speech encompasses everything about the now-2000 year-old Doctor that we embrace, because for all of that terrible power he is filled when confronting enemies, we know all of that rage is channelled into defending that tiny, insignificant race that he loves the most. Humans.

There’s only four episodes to go and Missy casually dropped a bomb at the end of Flatline to set us up for the finale. “Clara, my Clara,” she croons. “I have chosen well.” dissolving into a cackle while we wring and our hands and bellow chosen! Chosen? This has been alluded to before, that Missy was the woman who called the TARDIS in the Bells of St. John, that perhaps Missy was connected with Gus from Mummy on the Orient Express (I know that one is sketchy but I am still pondering it). Missy exudes evil triumph on choosing the ‘right one’.  The best person for the job, but what? Just what has the Gatekeeper of the Nethersphere got to do with the Doctor and why is she collecting souls? And has Clara really been manipulated by Missy all along? 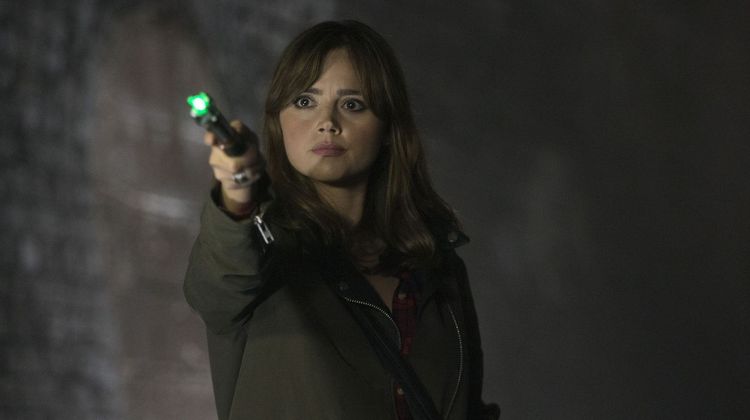 Flatline‘s underlying story combined one of the overarching themes of Series 8, am I a good man? This week Clara had to take a walk in the Doctor’s shoes. While it’s not a particularly unusual theme to have the companion separated from the Doctor and have to make their own choices Clara has been presented as wholly more significant than all of the other companions since the series reboot. She has been given more presence, more power and more equality with the Doctor than all of the other companions combined. She has also been the one to really struggle with her feelings about the Doctor’s way of doing things, and not only since his regeneration. Not too long ago we saw her question his decision to burn Gallifrey in The Day of the Doctor. Her journey over the last three episodes has been quite telling. She lashed out at the Doctor for placing her under too much pressure by abandoning her to make a monumental decision in Kill the Moon. She thought that she had made the right decision to break away from the Doctor in Mummy on the Orient Express, until she saw the Doctor willing to sacrifice himself to save everyone on board the train. She finally saw him clearly again, and when he lamented he couldn’t save everyone and began to understand how he made his decisions. Flatline cemented Clara’s new understanding of the Doctor when she was given the awesome responsibility the Doctor shoulders year in year out to keep the universe safe.

There were some interesting moments in Flatline. Lie to them. Give them hope she tells the Doctor with grim resignation when he asks her what is next. This was particularly poignant because the Doctor also sees himself through Clara’s eyes is that what I sound like? She berates Rigsy for attempting to sacrifice himself to save the world You’re not getting off lightly there’s work that needs doing she tells him emphatically. Maybe she’s recalling her words to the Eleventh any idiot can be a hero…be a Doctor. The Doctor lamenting that they may have saved the wrong people was really bleak. And after the heady feeling of saving the Doctor and thus saving the world, Clara seeks his praise. She knows she has it, and she knows he has his confidence yet she seeks it all the same. Perhaps she needs the validation, she’s lying to her boyfriend and leading a double life again, perhaps she wants to remind herself there is something bigger than her and Danny. The Doctor responds to her badgering You were an exceptional Doctor Clara. Goodness had nothing to do with it and strangely gives her a look full of pity. Does he feel he is leading Clara down a path she will be unable to return from?

Moffat mentioned the ‘addiction’ angle in Doctor Who Extra again. I am beginning to find that not only gauche, but unnecessary. Sure the Doctor likes to showboat (did everyone else love that strut?) but he’s not a glory hound. He is driven to keep people safe, as Clara is now beginning to feel the relentless drive to protect humanity and the rest of the universe from its foes. Is it really an addiction or merely embracing a terrible and wonderful responsibility? As for Clara, who could go back to a mundane life when one has saved the universe countless times? And, again, the world is full of P.E. teachers. We need more Doctors.