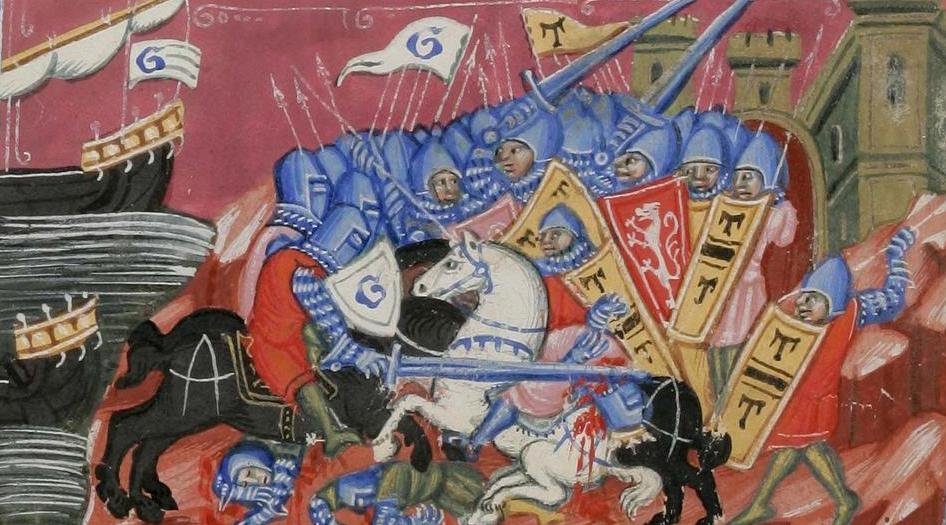 Two of Richard III’s book have travelled rather a long way from his personal collection to the Russian Public Library where they are housed today. Richard purchased the Historia Destructionis Troiae (History of the Destruction of Troy) a Latin prose narrative by Guido delle Colonne, along with Historia Regum Britanniae (History of the Kings of Britain) by Geoffrey of Monmouth during his tenure. While they were not produced as one book they were probably produced at the same time and remained together. From 1650 they were mistaken as a single volume and possibly bound together – they now have an 18th century binding. There is no indication of previous owners and neither manuscript is illuminated. Both are signed by Richard on the title page and we might assume they were well-thumbed by the time they made it to the Richmond library.

Neither of the books were listed in Henry VIII’s surviving catalogues – only Richard’s Grand Chroniques de France is listed – but they remained in the royal collection until the mid 17th century. Both books contain the signatures of James I, Charles I and Oliver Cromwell, dated 1656. Below you can see Cromwell’s signature above Richard’s Ricardus Rex. 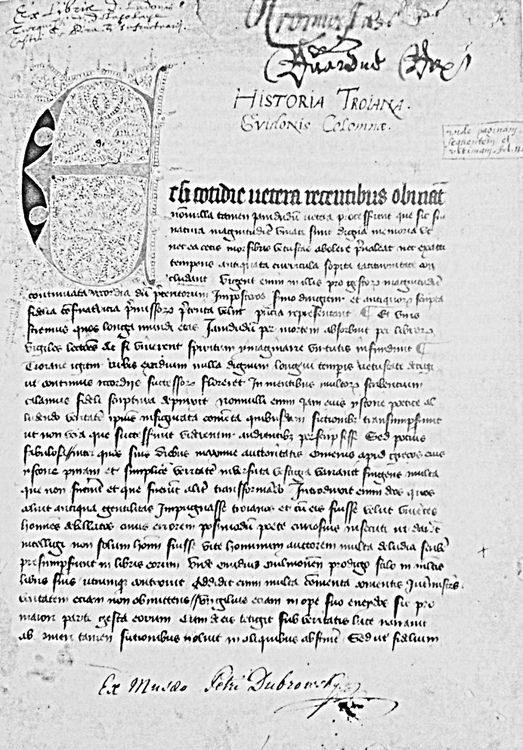 The signature at the bottom of the page belongs to Peter Dubrovsky, a Russian collector of rare manuscripts – also a paleographer, diplomat and secretary of the Russian Embassy in France. During the French Revolution he acquired manuscripts and documents, which were stolen from the public libraries in France. He purchased Historia Destructionis Troiae for six livres in May of 1789, along with Historia Regum Britanniae. Dubrovsky had both books bound in green velvet, which he bound his most valuable books in. Dubrovsky’s collection was donated to the Russian Public Library in 1805.

While neither of Richard’s manuscripts were illuminated there are many examples of illumination from these popular texts. A surviving 14th century Venetian copy which now resides at the Fondation Martin Bodmer in  Cologny, Switzerland contains 187 illuminations. The margins of the manuscript reveal notes made by the scribe in Venetian dialect indicating the plan for incorporating a series of miniature illustrations, which were then added by the illuminator.

A 15th century French translation La destruction de Troye was listed in the books at Richmond Palace in 1535. It was was commissioned by a ‘maire’ of Beauvais for Charles V of France in 1380. This manuscript contains 34 illuminations, the one below depicting Greeks and Trojans.

This illumination from a 15th-century English manuscript of Geoffrey of Monmouth’s Historia Regum Britanniae depicts Vortigern meeting the young Merlin, who explains that an underground fight between red and white dragons is causing Vortigern’s fortress to collapse.