No Damsels in Distress: Fearless Women in Fairy Tales

Olga Hughes
History of Folk & Fairy Tales
Even traditional fairy tales are full of resourceful women. While there may be many tales of fair maidens being saved by heroes and princesses saved by princes, these tales often follow themes of chivalric romance; of high adventure, magic and men proving themselves worthy of a woman’s love rather than proving how helpless women are. And while many fairy tales featuring interesting heroines have not made it into popular culture, there are also some rather famous fairy tales where the woman saves the day. We’ll begin with one of the most famous fairy tales of all time. 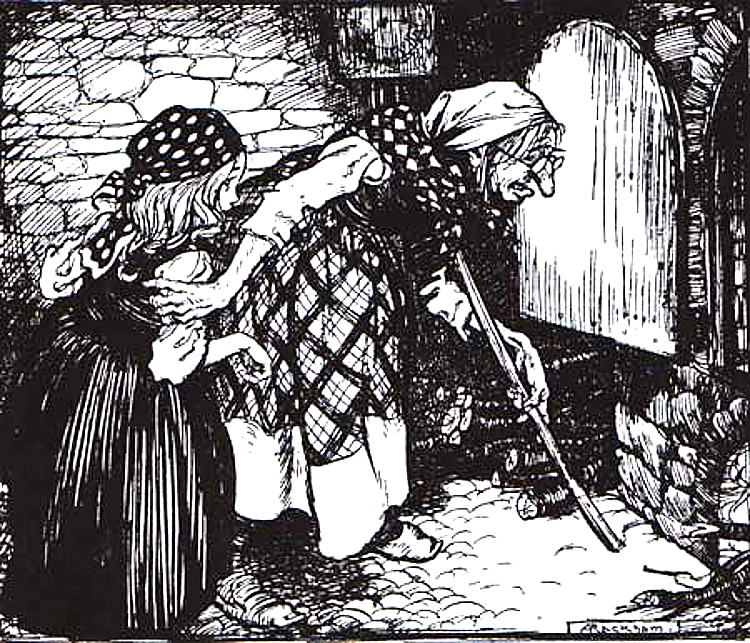 There are various themes in Hansel and Gretel that rather overshadow Gretel’s great triumph. Things such as poverty and starvation, child abandonment, abduction and cannibalism all seem more worthy of analysis. But in the end the fairy tale features a tiny young heroine who saves herself and her imprisoned brother from certain death, by using her wits and defeating a powerful witch.

When Gretel came, she said, “Look inside and see if the bread is already nice and brown and well-done. My eyes are weak. I can no longer see so well from a distance, and if you can’t see, then sit down on the board, and I’ll shove you inside. Then you can get around inside and check everything.”
The witch wanted to shut the oven door once Gretel was inside, for she wanted to bake her in the hot oven and eat her, too. This is what the wicked witch had planned and why she had called the girl. But God inspired Gretel, and she said, “I don’t know how to do it. First you show it to me. Sit down on the board, and I’ll shove you inside.”
And so the old woman sat down on the board, and since she was light, Gretel shoved her inside as far as she could, and then she quickly shut the oven door and bolted it with an iron bar. The old woman began to scream and groan in the hot oven, but Gretel ran off, and the witch was miserably burned to death. 1 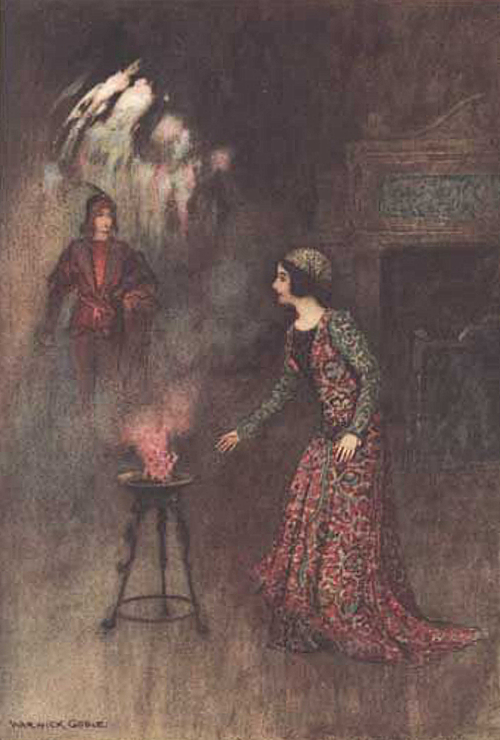 Also published as The Three Sisters, Giambattista Basile’s Verde Prato features a very resourceful heroine indeed, and like many Italian fairy tales, does not shy away from romance. The beautiful Nella is having an affair with the royal prince, who lives eight miles away. The prince constructs a secret tunnel made of crystal, which runs underground from his home all the way to Nella’s bed. Nella’s sisters get wind of the affair and try to sabotage it by breaking up the tunnel. The prince, who usually comes running in a ‘naked frenzy’ when Nella calls him, is badly wounded on the shards of crystal, and as the crystal is enchanted, there is no human remedy. The king promises the reward of half his kingdom to any man who can cure his son, or his son’s hand in marriage to any woman who can save him.

Distraught, Nella runs to her lover. On her travels she overhears some ogres discussing how their own fat smeared over the princes wounds would cure him. Nella bravely goes to the door, pretending to be lost, and the ogre, fancying to eat her later, gives her shelter. Only

…the glutton calculates one bill and the innkeeper another. After the ogre had gotten good and drunk and put himself to sleep, Nella took a knife from a cupboard and did a butcher job on him. Then she put all the fat in a jar and set off in the direction of the court, where she presented herself to the king and offered to heal the prince.
With great happiness the king let her into his son’s room, where she lubricated him thoroughly with the fat, and—no sooner said than done his wounds immediately closed up, as if she had thrown water onto fire, and he became as healthy as a fish.2 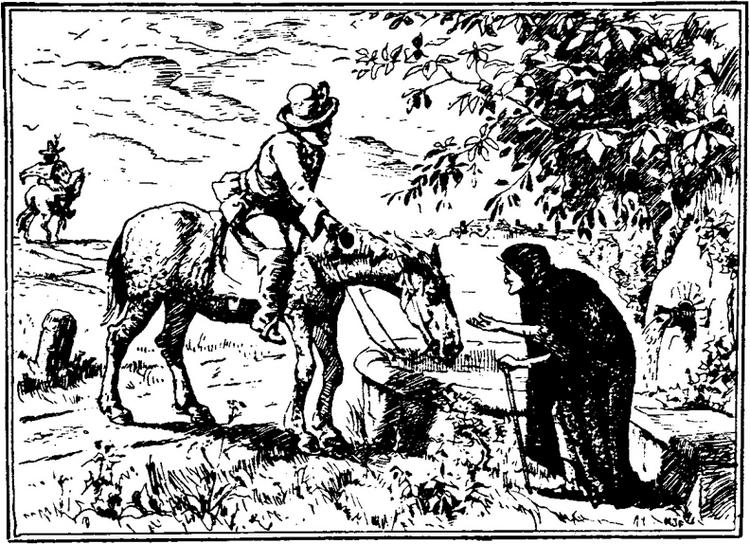 One of the themes in Cinderella, the “rags to riches” story, has become ingrained in popular culture, despite not being a particularly important aspect of the tale. The main moral of that story is actually graciousness and forgiveness. Modern Cinderella adaptations have seen the introduction of arranged marriages and class divides, and this is really a tradition that has been popularised by regency and Gothic romances. In fairy tales, sometimes it is the princess that falls in love with the pauper.

In The Bronze Ring, the royal princess falls in love with the gardener’s son. The king is incensed when his refuses to marry his minister’s son, declaring that her heart belongs to another. But following the advice of his councillors, he stages a contest between the two men, sending them to a far off destination and declaring the first to return will marry the princess. The minister’s son is given a fine horse and a purse of gold, and the gardener’s son a lame horse and a purse full of copper. The princess, knowing of the plot against her lover, goes to him in secret.

Be brave, and remember always that I love you. Take this purse full of jewels and make the best use you can of them for love of me, and come back quickly and demand my hand.

Now the gardener’s son plays his part too, the kind-hearted young man aids an old woman who the minister’s son had ignored earlier. He offers her a ride and his own purse, and as a reward the old woman tells him how to obtain a bronze ring which will grant him anything he desires. It is with this ring the gardener’s son is able to defeat his rival and marry the princess, who upon seeing him return proves her faithful heart and declares “you are the gardener’s son whom I have always loved, and it is you I wish to marry”.3 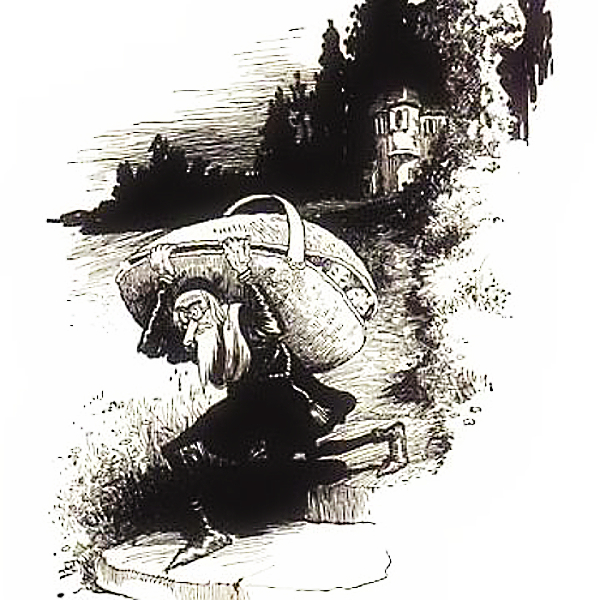 Fitcher’s Bird is a rather gruesome Grimm’s, with a courageous and clever heroine. A sorcerer keeps kidnapping girls from the village and then murdering them when they discover a grisly secret in the house. He has captured both of our heroine’s sisters, carrying them home in his basket, and butchered them both. When he captures our heroine, she manages to keep her head when she discovers the room containing the corpses. She takes all the butchered pieces of her sisters an puts them back together, and brings them back to life. Then the sorcerer, returning home and thinking she has not discovered his secret, asks our heroine to marry him.

She said yes, but she told him that before she’d marry him, he had to fill his basket full of gold and carry it to her parents on his back. In the meantime she would make preparations for the wedding. Instead, she stuck her sisters into the basket, covered them with gold, and told them that they were to get help from home.
“Now carry this basket to my parents,” she said to the man, “but don’t dare to stop and rest along the way. I can see everything from my window.”

In the meantime the heroine plants a jewelled skull in the window to fool him and disguises herself as a bird. She escapes the house, although she encounters the sorcerer’s wedding guests, who sing:

“Where are you coming from, oh, Fitcher’s bird?”
“From Fitze Fitcher’s house, haven’t you heard?”
“And what may the young bride be doing there?”
“She’s swept the whole house from top to bottom.
Just now she’s looking straight out of the window.”

Our heroine makes it all the way home, and the family sends ‘helpers’ to burn the house down with the sorcerer and his wedding guests trapped inside. 4

East of the Sun and West of the Moon 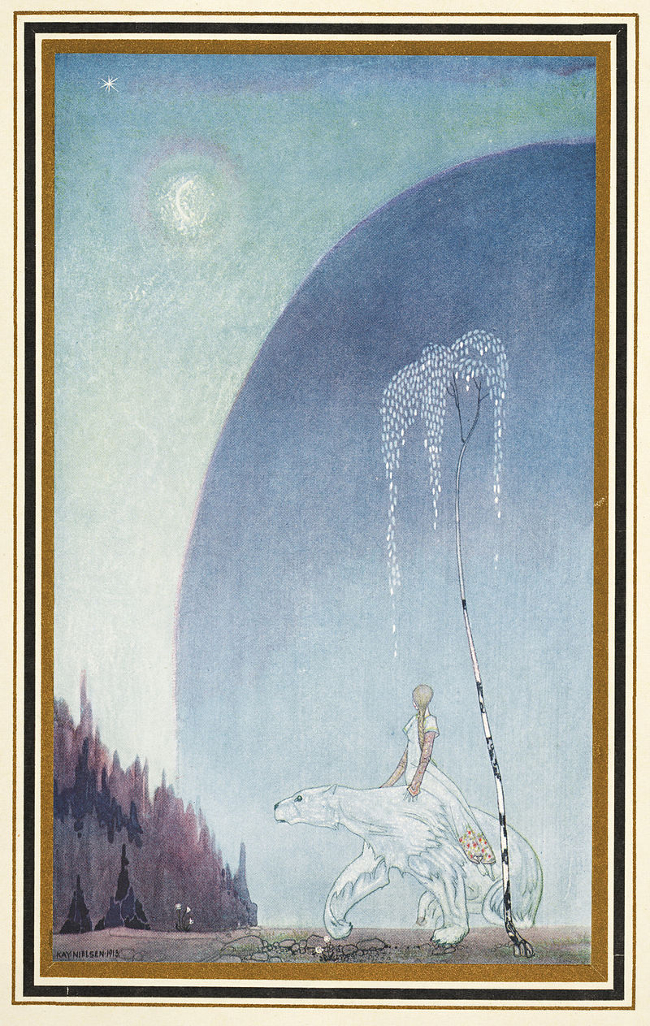 This beautiful Norwegian fairy tale tells the unusual tale of a woman who must rescue her prince, after putting their relationship in peril with her impatience, and East of the Sun and West of the Moon sees our heroine embarking on several great adventures.

The tale starts off with a familiar theme, when a man is forced to give up a daughter so the rest of his family don’t starve, to a mystical stranger, in this case an enchanted white bear. In a traditional style he treats her kindly and gently and she eventually feels affection for him. The bear comes to bed at night as a man but instructs her to never light a candle. After taking with her mother, who convinces our heroine the bear is a troll, she lights a candle at night to check.

She got up and kindled a light, lit her candle, let her light shine on him, and saw him, and he was the handsomest prince that eyes had ever beheld, and she loved him so much that it seemed to her that she must die if she did not kiss him that very moment.
So she did kiss him; but while she was doing it she let three drops of hot tallow fall upon his shirt, and he awoke. “What have you done now?” said he; “you have brought misery on both of us. If you had but held out for the space of one year I should have been free. I have a step-mother who has bewitched me so that I am a white bear by day and a man by night; but now all is at an end between you and me, and I must leave you and go to her. She lives in a castle which lies east of the sun and west of the moon, and there too is a princess with a nose which is three ells long, and she now is the one whom I must marry

After her lover vanishes, our heroine sets out in search of him. She rides the East Wind, the West, South and North winds, collecting magical objects along the way, until she reaches the castle east of the sun and west of the moon. And when the troll princess discovers her she tries everything she can to thwart her, but our heroine keeps returning. Some kind folk in the castle warn the prince, who is being drugged nightly, and he discards the potion the troll princess brings to him. Together our heroine and the prince contrive a plan. The prince says:

I will say that I want to see what my bride can do, and bid her wash the shirt which has the three drops of tallow on it. This she will consent to do, for she does not know that it is you who let them fall on it; but no one can wash them out but one born of Christian folk: it cannot be done by one of a pack of trolls; and then I will say that no one shall ever be my bride but the woman who can do this, and I know that you can.

Our heroine, after a long and arduous journey riding enchanted winds and outwitting trolls, is rewarded with her great love, by the washing of a shirt.5