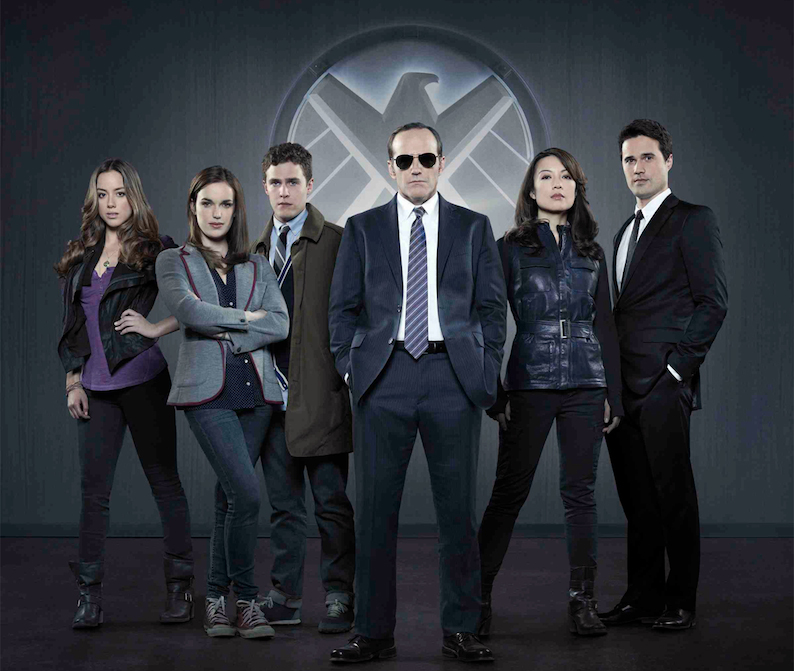 Marvel’s, or perhaps more properly, Joss Whedon’s Agents of S.H.I.E.L.D. is the action drama spun off from the Joss Whedon’s Marvel The Avengers movie. It follows the story of Agent Phil Coulson, now heading his own small group under the geas of the larger techno-fascist S.H.I.E.L.D. organization.

S.H.I.E.L.D. created by Stan Lee and Jack Kirby in 1965 began as a kind of world police to deal with the superhuman and transhuman threats posed by mutants, aliens and advanced or alien technology. The acronym originally stood for Supreme Headquarters, International Espionage, Law-Enforcement Division. This probably echoed a little too loudly with the sound of shiny leather boots, and was changed in 1991 to the much more bureaucrat-speak Strategic Hazard Intervention Espionage Logistics Directorate. In more recent times, in cinema at TV versions of the marvel universe, it has become Strategic Homeland Intervention, Enforcement and Logistics Division. Homeland is one short goosestep from Fatherland, so it has reached a pinnacle combining the techno-fascist military organization with interminable governmental bureaucracy in almost perfect unison.

This is well suited to Phil Coulson’s character. In Avengers Coulson played the plain, nervous, earnest, bureaucratic agent dealing with and trying to keep in check a collection of enormous superhero and villain personalities. His nerdish hero card collection and Captain America fan crush was kind of cute. His death at the hands of Loki was the catalyst that motivated and unified the team.

In Agents of S.H.I.E.L.D. he has been resurrected, possibly a little changed, a little more dynamic than the original. It has not been explained exactly how. Inline with the show’s themes of bioweaponry and genetic enhancement, via a back-up clone with a downlaoded personality/memory complex seems most likely. There has been some attempt to coolify him by expanding his nerdish collection from 1940s Superhero Bubblegum Cards to including various alien hardware as well as a vintage flying Corvette fitted with some sort of anti-grav wheels. As we all know, collecting cool stuff makes you more nerdy, not more cool. Bubblegum cards was kind of cool in a nerdish way. Collecting assorted alien hardware from past missions, trophies if you will, kind of makes you a jerk, if not a serial killer.

How a guy on a mid level bureaucrat’s salary can afford a 1962 Chevrolet Corvette fitted with alien hover technology is a mystery. Why they don’t use this technology on S.H.I.E.L.D.’s Helicarrier base, which instead is fitted with tremendously vulnerable giant fans, which are torn apart by the first villain that wants to throw a spanner in the works, is another mystery. The hover tech would serve equally well on the renovated B52 Coulson’s team use as a permanently flying sky base, who knows.

On this base Coulson is joined by the extreme geeky duo Leo Fitz and Jemma Simmons, a cutesy pair of Tweedle-dum and Tweedle-dee engineering and bio tech prodigies, Melinda May, a skilled ninja-ish pilot with a dour attitude and battle fatigue, Grant Ward, a dogged, handsome super action man black-ops agent, and outsider rebel hacktivist Skye. She seems 97% bimbo, and 3% hacker coding skills, only one of those percentages being at all convincing. Chloe Bennet is tremendously cut as Skye, but the fact that she gets down to her underwear by the 5th episode is a little telling. Previously working for an anonymous coalition of hackers and info-freedom fighters – The Rising Tide, she throws over her ideals and joins S.H.I.E.L.D. perhaps as double agent, but she also has a personal agenda; to gain access to secret info on her parents amidst S.H.I.E.L.D.’s files. I don’t think so many cute agents have ever been gathered together since those 1960s Ralph Thomas spy parodies, or perhaps the original British TV Avengers. Of course Emma Peel and John Steed had chemistry and wit. In S.H.I.E.L.D. the characters seem cobbled together, so with the backstories and the dialogue. We know what you get a lot of when too much feels cobbled together. A lot of fancy CGI. And here we’ve got CGI out the wazoo. Wazoo’s a technical term for one of those four dimensional alien dimension thingummies. Or at least it should be.

The Agents of S.H.I.E.L.D.‘s mission seems to be to keep humanity safe by stopping alien technology falling into the hands of crooked capitalists as well as revolutionary foreigners, while also keeping tabs on those with potential superpowers, who may be being recruited and or genetically experimented on by another secret outfit using a centipede like device to attempt to instil genetically harvested powers in ordinary test subjects. Causing all sorts of shenanigans, and people exploding. Of course these bad guys despite their vast wealth and cunning plans are dumb enough to hide one of their facilities under the guise of an eco-friendly centipede research institute.
Now while it is easy to accept plot flaws and even put aside the dubious paternalistic politics of Agents of S.H.I.E.L.D., it seems the writers of the show are under instructions to Whedonify everything, especially the dialogue. There are many popular Whedon tropes; we saw transferable personalities in Dollhouse. In Season 4 of Buffy The Vampire Slayer there was a secret government military agency called The Initiative, researching how to control and negate ‘sub-terrestrials’, as well as how to harvest powers or hybridize supernatural beings to create super soldiers. Of course in Buffy the heroes were kids, teenagers, the authority figures were the enemy. The techno-fascist Initiative managed to Frankenstein up a super soldier, and in the great tradition of such stories, it went rogue and rampaged everywhere, killing its creator. From Buffy to Angel, Firefly to Dollhouse Whedon’s lead characters have always been outsiders and rebels. Another hallmark of Whedon’s characters, especially in Buffy, is the sarcasm, the irony, the glib banter, the gallows humor, the witty asides and sharp dialogue.

This works in Buffy because the characters are teens with both the innate sense of indestructibility and the perception of imminent destruction that is part of teen consciousness. The fact that Sunnydale High is positioned over the Hellmouth, the epicentre of a coming demonic apocalypse, redoubles that effect. Whedon’s teen heroes, of course speak defiance and sarcasm as a second language. Like young soldiers on the front lines of an imminent battle, subject to the vagaries of the battlefield, they have little with which to control or defy their fate, except language.

Unfortunately, in Marvel’s Agents of S.H.I.E.L.D. the characters are not the defiant teen rebels, facing overwhelming forces. They are the overwhelming forces. They are the ones with high tech alien weapons, a vast surveillance and info net, military response forces at their beck and call, a fully kitted high tech B52 flying base all backed by a giant flying combo Helicopter Aircraft Carrier. Occasionally assisted by individuals with alien or supernatural powers. In any other version of Joss Whedon’s universes, these guys are agents of the enemy. So when they utter deadpan quips that might have been ironic or funny from Xander or Willow, it just doesn’t ring true. In fact, the dialogue seems like a parody of Whedon at his best, a little desperate to be amusing.

So watch it for the brisk action, the cute characters, the gizmos, the flash and bang, the CGI. If you’re looking for the clever dialogue of Whedon’s previous shows, you may be disappointed.