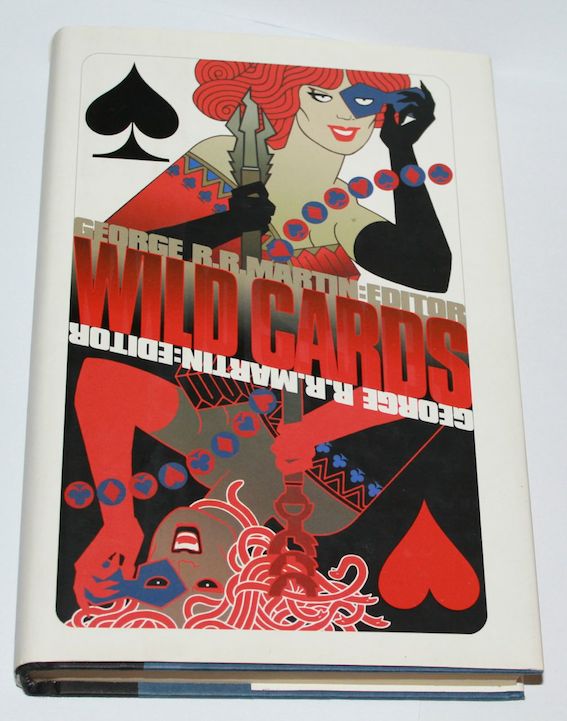 Wild Cards XVI – Deuces Down the 16th book in the series, with cover art by a legend in the field of SF illustration, Steranko.

George R R Martin, author of the epic fantasy series A Song Of Ice And Fire, brought to life in HBO’s groundbreaking fantasy series A Game Of Thrones, has confirmed a series of movie and a TV spin-off based on the Wild Cards science fiction series of books is still in development.

It was widely reported in October, 2011 that SyFy and Universal had acquired the rights to the project. Given the huge success of DC and Marvel adaptations in the same genre, other studios have been looking hard for similar projects. Little has been heard about it since.

Wild Cards is a science fiction superhero series which had its genesis in a long running campaign in the role-playing game Superworld, played by a group in Albuquerque, New Mexico, and game mastered by George R R Martin.

Wild Cards tells an alternate history of the earth, post WWII. In 1946 an alien virus, the Xenovirus Takis-A, commonly called the Wild Card virus, is accidentally released over New York, and eventually spreads to the rest of the world. It kills most people on exposure. A few survive the effects, some mutate into deformities which come to be known as ‘Jokers’, others, a very few, known as ‘Aces’, gain extraordinary powers from the effects of the virus. A small number of those gain weak or ridiculous powers from having their DNA rewritten, such as the ability to grow hair at will, to turn into a puddle of water, or to levitate two feet off the ground, and are known as ‘Deuces’. The card metaphor runs through the series.

It’s an unusual, ambitious and complex universe, exploring a rich alternative history populated with many well known events and historical figures whose outcomes and lives are completely changed, leading to surprising ironies and consequences. Unlike the DC and Marvel universes, in which most superheroes have secret identities or are part of secret organizations, very much a closed subculture, in the Wild Cards universe, those granted powers by the effects of the virus often have celebrity status, wealth, power success. Those deformed by the virus are reduced to living in ghettos. It also explores the reality of a world affected by extraordinary changes in a way that is more realistic than the stories in conventional superhero narratives. Although that’s a familiar approach now, when Wild Cards was first published in the late 1980s it was risky and unconventional.

Think something like the TV series Heroes, some of the tropes of X-Men, and Alan Moore’s Watchmen, and you may get a not very accurate inkling. Based in science fiction writing, rather than comic books, it is also more adult than the usual superhero story. Undoubtedly, for a movie and TV version, some of the more graphic Aces may have to be revised. One character, Fortunato, uses sex to regenerate his superpowers, another, the Astronomer, uses ritual murder. While graphic sex and violence may work in SF books and HBO fantasy and crime dramas, in the world of comic books, and their movie adaptations, the cult status of Watchmen and the lack-lustre reception of the film adaptation is perhaps indicative.

The books themselves are also quite a departure from the conventional, a shared universe with many authors, combining collections of short stories, usually surrounding a single theme or event, mosaic novels in which several authors write individual story lines which are edited together into a complete narrative, as well as several complete single author novels, all arranged, guided and edited by George R R Martin, a god-like overseer, rather like an RPG gamesmaster, assisted by Melissa M Snodgrass, who has also penned many stories in the series, and is in charge of the script for the film and TV project.

Other notable contributors include Roger Zelazny, Howard Waldrop, Lewis Shiner, Chris Claremont and of course George R R Martin himself. Neil Gaiman’s original version of The Sandman was famously first proposed for Wild Cards, but was rejected, before Gaiman reworked it for DC, perhaps Gaiman will finally write a piece for the project.

Given the scope of the series, and the wealth of talent and ideas that have gone into it over the last 25 years, that it is a complete universe with many compelling storylines and intriguing characters from the 22 books, with a story arc spanning the last 60 years or so of an alternative history, if it is done well, and not Disneyfied too much to satisfy censors, it is the perfect vehicle for a high quality TV series and movie adaptation. Let’s hope SyFy and Universal can commit the same kind of quality and attention that HBO has shown in making Game Of Thrones.

At an author talk co-hosted by The Wheeler Centre and the Supanova Pop Culture Expo, in Melbourne, Australia on the 13th of November, 2013 Martin confirmed that a series of films based in the Wild Cards universe was still in the works with Universal.

“The script is in development, but in Hollywood, nothing is certain.” He said. 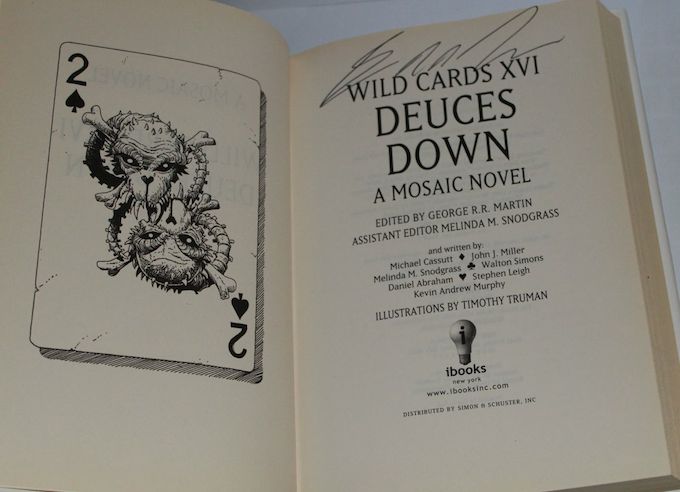 Illustrations by Timothy Truman. iBooks published 3 books in the series. This is a signed first edition from 2002.