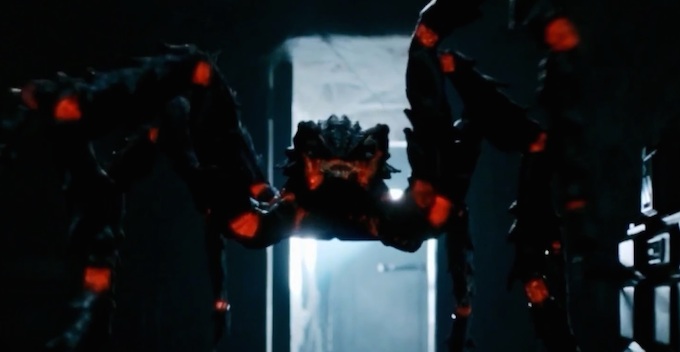 Doctor Who: How Clara Oswald Changed Into An Hysterical Fish Wife

No, it wasn’t because of some alien parasite infecting our feisty heroine with brain sucking tentacles. One could also be forgiven for assuming it was female trouble, or moon madness. No it wasn’t hormones or fluctuating currents in the bodily humors, either.

Let us put aside the ridiculous science of the episode, and a plot so full of holes it could have been made of Swiss (if not Lunar) cheese. For instance, tectonic, gravitational and mass changes on the moon would easily be detected by Earth’s batteries of observational equipment, from the giant 10.4 metre GTC Optical Telescope in the Canary Islands, to the impressive Atacama Large Millimetre Array Radio Telescope on the 5000 metre high Chajnantor plateau in Chile, not to mention advanced and powerful satellite equipment like the Fermi Gamma Ray Space Telescope, and the Chandra X-Ray Observatory. The moon is of course our very, very, very near neighbour, and is under such scrutiny from even casual backyard stargazers, that not only does it no longer have a Dark Side, not even a mouse could move on its surface without someone here knowing.

If the solution to the problem of fluctuations in the moon’s gravity causing chaos on Earth was to blow up the moon with nuclear warheads, a missile such as the LGM-118A Peacekeeper and other three stage ICBMs could easily escape Earth’s gravity and reach the moon, they are designed to go beyond Earth’s atmosphere, then plummet back down from space to wreak havoc. Whereas a Space Shuttle after dropping its launch boosters has barely enough fuel to return from Earth orbit.

We should also ignore why a large, complex, obviously multi-celled arachnid-like creature was described as a single celled bacteria. I guess a gross gooey glob of protoplasm just isn’t as scary as a skittering creepy-crawly with luminous red stripes and a nasty set of fangs.

Something else to avoid is the quandary this will put strict American religious types in. They hate Doctor Who for promoting things like freedom of thought, questioning authority, Science, Darwin and that infamous Lesbian lizard kiss, but this episode could be interpreted as weighing into the “pro-life” side of the abortion debate.

While the story was mostly glib and nonsensical, the reference to the tradition of the moon being an egg, and hatching a dragon, was delightful. The moral choice between one extraordinary life, and the life of millions on Earth was an intriguing hook, referencing a classic SF trope, explored by Ursula LeGuin and others. And adventurous but kinetosic Courtney Woods got over her sickness to be the first girl on the moon, and spill the terrific line, “One small thing for a thing… One enormous thing for thingy thing!” Carrying being a disruptive influence from the Coal Hill classroom to taunting the annals of history.

The biggest issue of the episode was that it all seemed to be treated as little more than a preamble to give Clara Oswald an excuse to have a hissy fit over having to make a difficult decision. Clara has spent several seasons bravely running through corridors, fighting Daleks and other miscreants, saving the Doctor by sacrificing her own existence, changing history by helping to bring back Gallifrey from the Time War, and numerous other amazing feats. Now she seems to have changed into a screeching, hysterical fish wife, upset at having to make a decision by herself to save the Earth of 2049. Somehow having a smug, controlling boyfriend, handsome but mostly self-concerned and vacuous, has transformed her from the gorgeously mysterious Impossible Girl to the sick-making Mundane Shrew.

We all know she’s leaving, but to leave in this manner, turning on the Doctor, is kind of irritating, actually really despicable. We just have to remember what fans wanted to happen to Wesley Crusher on Star Trek TNG when he became increasingly annoying. Everyone hoped that Q would accidentally put him out the airlock. Let’s hope Courtney (in the tradition of the best disruptive influences) writes a note for teacher. “Dear Miss Oswald, Goodbye and don’t let the door of the TARDIS hit you in the butt on your way out.”