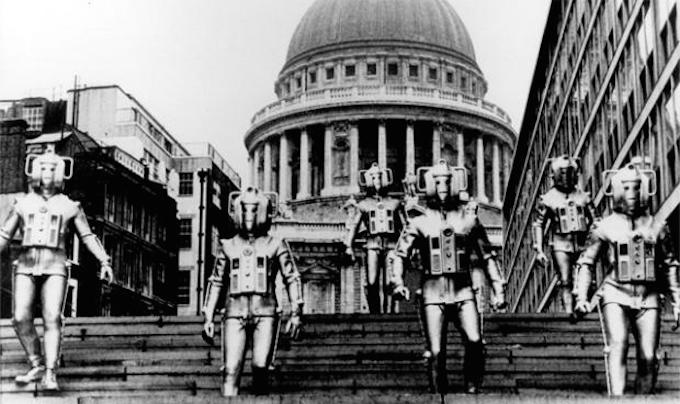 Many of the SF novels and stories of Philip K Dick are marked by very ordinary people thrown into extraordinary circumstances by situations that make perfect sense, that have their own very consistent internal logic, but nevertheless result in the bizarre, the surreal. You may be familiar with some from movie adaptations; Blade Runner (Do Androids Dream Of Electric Sheep? -1968),  Impostor (Impostor -1953), Screamers (Second Variety -1953), Total Recall (We Can Remember It For You, Wholesale -1966), A Scanner Darkly (A Scanner Darkly -1977), Minority Report (The Minority Report -1956), The Adjustment Bureau (The Adjustment Team -1954), Radio Free Albemuth (Radio Free Albemuth -1976) and several others.

His work also often displays a sense of paranoia, sudden shifts in reality that twist the whole story. The dream, the delusion, the impossible suddenly becomes very real. Often as not the twist turns another notch, everything changes once again. Intertwined layers of reality and unreality. It’s a device well suited to film and TV, and a technique that has spread throughout SF.

Thus in Dark Water when Clara sticks a sleep patch to the back of the Doctor’s neck, and the Doctor wakes up locked outside the  TARDIS on the edge of a volcano with Clara attempting to blackmail him into rescuing Danny Pink from death, it’s an intense, very Dickian moment. When it turns out the sleep patch was a dream patch, and that Clara’s whole experience of the confrontation was an hallucination, that’s an almost pure Philip K Dick reality twist.

In the 1969 Philip K Dick novel, Ubik, like Dark Water’s W3 organization, there are installations across the world where dead people are kept in a form of cryonic suspension, a half-life from which they can still be woken and communicated with. In Dark Water consciousness is maintained so that it can be later downloaded to an army of Cybermen. A little different, but the basic question, what if consciousness is maintained after death? is proposed and answered in a similar way. And that is the fundamental tenet of science fiction; to pose and answer the question, what if?

From that point of departure you can ask anything from philosophical questions that explore the fundamental nature of life, death and reality, to questions extrapolating from a very real scientific or technological fact; W3 gets its name from three words, apparently discovered by one of the organization’s founders, Doctor Scerosa. By recording white noise from TV static and running it through a processor, he could hear in the noise the cries of the departed, imploring, “don’t cremate me”. This spooky notion is extrapolated from the very real work of Doctor Konstantin Raudive, who published an account in the 1971 book, Breakthrough, of the weird phenomena of how by recording white noise by attaching a transistor to the recording head of a taperecorder, in the sound played back, people hear human speech, often the voices of the departed. Whether it is the actual dead, or merely a psychological effect depends on your perspective, and is still a question that is debated.

In a more down to earth example, there is the concept of dark water itself. There are already gels which share the exact refractive index of water; they bend light passing through at exactly the same rate, thus when objects made from such gels are placed in water, they vanish completely. Of course in the real world such material have practical uses in contact lenses and even the development of artificial corneas. In science fiction it becomes only a short leap to posit a liquid coating that renders other materials invisible, to surreal effect; skeletal bodies kept in tanks, ostensibly to prevent the consciousness in the next life, still connected to that body, from experiencing the gruesome post-death experience, but actually a simple disguise to develop a vast Cyberman army, hidden in plain sight.

Danny Pink is a little more sympathetic now that he is dead. As an ex-soldier, and a teacher, one might expect him to have some appreciation of gallows humour. However when encountering Seb – a snide and officious employee of the Nethersphere, interviewing Danny in preparation for his afterlife, in a scene very reminiscent of Monty Python’s Undertaker Sketch, when Seb yells out to a co-worker that they have a “burner”, stress and confusion seem to shut off the last vestiges of Danny’s sense, so much so, that a little later, still in the same state, after talking via afterlife WiFi with Clara, he’s almost ready to delete his higher functions, which will probably download him straight into a Cyberman. I’m all for mocking the unaccountably dim, but mocking those that are both stupid and dead is a little beyond the pale.

In the least unexpected, but no less delightful, turn of events of the entire season, Missy, after giving the Doctor a bit of a snog, activates her army of Cyberman, and reveals to the Doctor exactly who she is. Of course the name was a dead give away ever since her first appearance. Missy – Mistress – Master. Her crazed capering, her mad antics, dancing around like a demented Mary Poppins, so reminiscent of John Simm’s portrayal of The Master as a demented genius, was the clincher.

In a classic serial cliff hanger we’re left wondering; how will the Doctor defeat a vast Cyberman army made up of countless dead? Will Danny delete himself? How will his consciousness be given a new body? How will he be reunited with Clara? How exactly did The Master escape from being drawn back into Gallifrey in its time bubble at the end of the 10th Doctor’s last episode, 2009’s The End Of Time? and regenerate to become Missy? How does Missy exist in both the world and the digital land of the dead that is the Nethersphere?

Although it doesn’t quite plumb the spiritual and existential depths with quite the same intensity as a Philip K Dick novel, I think he would have appreciated the modern Doctor Who, and the way his complex ideas have transformed SF, even filtering down to enrich a matinee style children’s adventure story. The way it questions authority, interrogates the real, defies convention.

Stay tuned, we will be.