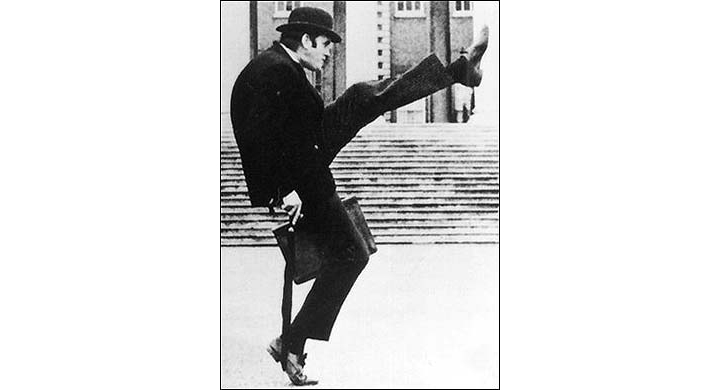 The Ministry Of Silly Walks is a sketch from episode 14 of the first season of Monty Python’s Flying Circus, first broadcast in 1970. John Cleese’s figure as a gangling bowler hatted bureaucrat has become iconic. At the time the Python team undoubtedly thought they were doing a bit of silly comedy. With time the Ministry Of Silly Walks has become akin to a piece of performance art, a political commentary on the ridiculousness of government.

In Brno, in the Czech Republic, International Silly Walks Day, January 7th, 2014, attracted 140 stiff-suited walkers striding, loping, duckwalking and kicking their way across the city square, while maintaining a Cleese-like dignity. The Czechs, of course, have a long history of dignified laughter in the face of oppressive bureaucracy. 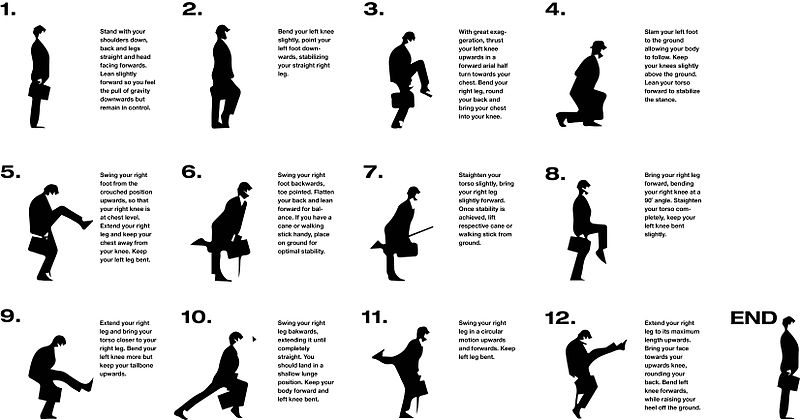 One could be forgiven for assuming, from the works of Norway’s most famous playwright, Henrik Ibsen, that Norwegians have no sense of humour. Watching an Ibsen play is more likely to induce suicide than laughter. Since the medieval period Norwegians have mostly been Evangelical Lutherans – highly regarded as the least funny branch of Christianity in the world. Prior to that they were Viking barbarians. One tends to imagine them as tall, blonde and thick, grimacing dourly as they disembowel Christians with curved axes. However the fact is the Vikings developed numerous methods for removing one’s body parts from one’s body while one was still alive to appreciate the artistry of the process, and were most likely laughing while they were doing so.

Recent events have further cast doubt on the theory that Norwegians have no sense of humour. First there was the song The Fox, a parody of a dance club song by comedic TV show host duo Ylvis. However, when the show’s team watched the final cut of the segment in their offices prior to broadcast, no one laughed. With a billion views of the clip on Youtube, almost everyone else in the world laughed. One gets the sense of people approaching something they don’t quite understand, like caveman doing Shakespeare, but carrying on regardless.

Recently in the town of Ørje, a Ministry Of Silly Walks sign was posted at a pedestrian crossing. The reaction of locals has been encouraging, indicating a definite tendency toward humorous prancing. Unfortunately some people seem to find this behaviour both crazy and undignified, and authorities are concerned that the sign is both illegal and may be causing a traffic hazard. However, in a country that still disembowels its Øs, a little silliness is perhaps a sign of progress. You can watch Norwegian broadcaster NRK’s report on the pedestrian shenanigans here. Just don’t mention the Spam sketch. Bloody Vikings.