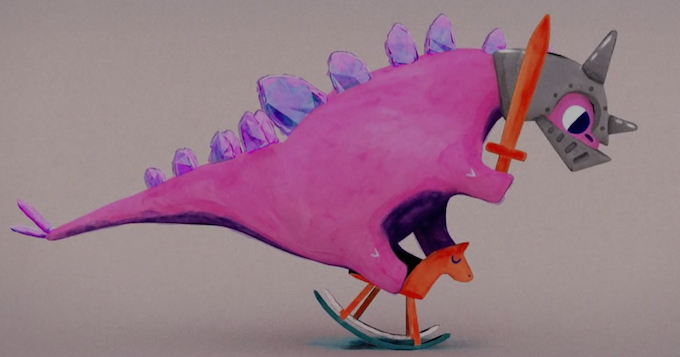 A Motion Poem of Kenn Nesbitt’s Wayne The Stegosaurus

Motion Poems – poems illustrated by video and animation, are certainly nothing new. From cartoon versions of Edgar Allan Poe’s The Raven to Shel Silverstein’s The Giving Tree, to the poetic sensibilities of the animations of John and Faith Hubley, there has always been a rich tradition. One thread of the tradition is often inspired by art, works like Paul Grimault’s 1943 The Passengers On The Big Bear, the fanciful tale of a trip on an airship, inspired by Victor Hugo’s epic poem of adventure Plein Ciel (Clear Sky), or the animated sequence from the 1969 short based on the Ray Bradbury story Picasso Summer, which sees the drama of Picasso’s vision brought to life. Or the collaboration by Walt Disney and Salvador Dali Destino, begun in 1945 but shelved by the Disney company until 2003, when it was finally completed.

More commonly the union of poetry and animation has been whimsical, educational or amusingly cartoonish. In 2008 Angella Kassube animated a piece by Todd Boss. The results were so intriguing they began introducing more poets to video artists and independent film makers. A year or so later to a packed screening they presented 12 such collaborations, and Motion Poems was formed.

While perhaps not quite the hybrid form of a kinetic poem – a video poem where the images and words are intertwined, inseparable, complete unto itself, their work has provided an inspiring intersection of forms and artists, resulting in 5 seasons of the visual and poetic, as well as numerous live screenings and art installations in Minnesota in the US where they are based.

MoPo generally works with established publishers and poets, which is probably related to their funding model as non-profit arts foundation, but their work has undoubtedly inspired students and artists in schools and colleges across the US. Their latest piece features US Children’s Poet Laureate Kenn Nesbitt’s amusing rhyme about a Stegosaurus who makes up for his tiny brain by having a big, big heart. You can watch the motionpoem below, and click to read more about the poem and the film makers.

Wayne the Stegosaurus: A Motionpoems Animated Short from The Mill on Vimeo.