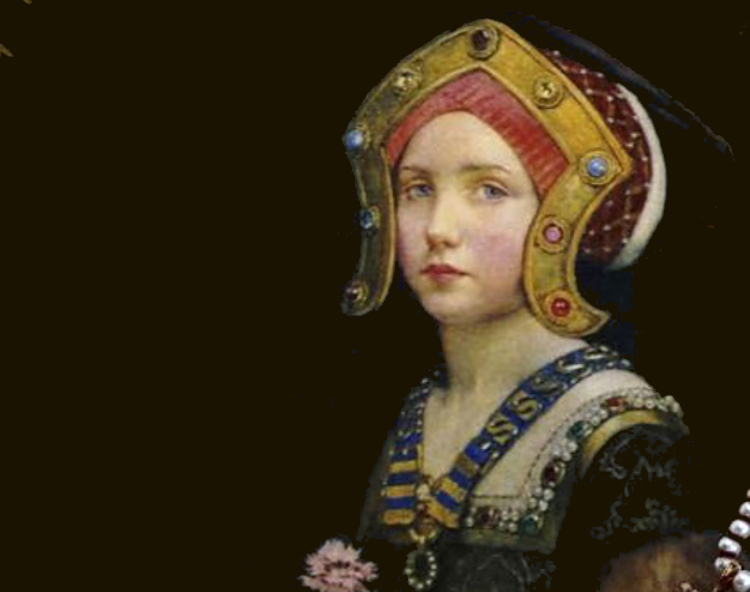 The Light in the Labyrinth – Christmas at Greenwich

Olga Hughes
History
December 15, 2016
On the third day of Christmas Wendy J. Dunn shares a tale of Christmas at Greenwich from her novel ‘The Light in the Labyrinth’.

My two Anne Boleyn novels, Dear Heart, How Like You This? and The Light in the Labyrinth, a young adult novel, construct a different Anne Boleyn from the one offered in the popular novels Wolf Hall (2009), Bring Up the Bodies (2013) and The Other Boleyn Girl (2001). I don’t see her as cold and driven by desire for power, as suggested in these novels. The Anne constructed by my imagination, based on my historical research, is not a woman capable of bedding her brother, even out of desperation to become pregnant and therefore secure her position as queen. But Anne Boleyn did see herself as England’s Queen.

I envisage Anne Boleyn as someone very much like her daughter Elizabeth. Like Elizabeth, Anne was not perfect, but a woman of great courage and intelligence, worthy of love and respect.

One of my joys in constructing Anne is to show as I imagine her, to open those closed doors of history is give readers a glimpse of how I see her. Anne was a loving mother and aunt. In the excerpt I offer here, I open the door to Anne’s chambers and have her enjoying time with her family on January 1st, a time when the Tudors traditionally exchanged gifts. The excerpt is told through the point of view of Anne’s niece Katherine Carey – a girl of almost fourteen who is struggling to deal with matters of the heart… 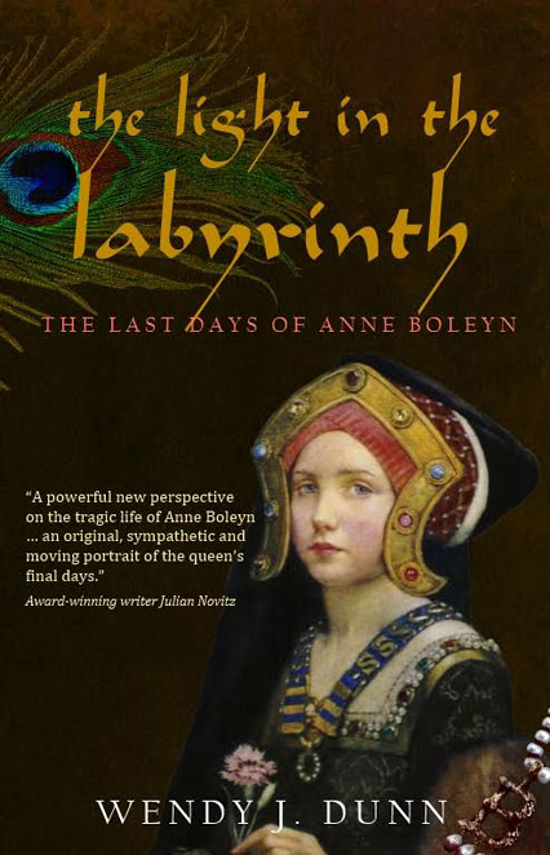 The days of winter seemed to go on forever. It was so cold that the Thames froze over—an ice so thick and hard that the King journeyed between his river palaces by sleigh, while Aunt Nan, caged by the ill health of her pregnancy, fretted about what he did whilst away from her. But the New Year festivities brought the King back and kept him lingering at Greenwich with his wife and little daughter.

From high to low, all at court exchanged gifts at New Year. Aunt Nan gave the King a gift of a new ornamental clock, and he gifted to her the largest diamond Kate had ever seen. With her royal parents at this time, little Bess did not miss out. Resting in her chamber that afternoon, Aunt Nan gave her daughter a jewelled hornbook with a black alphabet outlined in gold.

Aunt Nan and Kate sat by the fire as Bess played with it on the floor. Aunt Nan smiled. “Look how she prefers the hornbook to the toys others have given her. She may be a little young for it, but soon I will start teaching my Bess her letters.”

Bess, hearing her mother’s voice, cast aside the hornbook and pulled herself up. Unbalanced by her heavy dress, she swayed for a moment before waddling over to them. Determination all over her face, every few steps she stopped to regain her footing. At last she reached her mother and collapsed against her, grinning in triumph. She held out her arms. “Kiss Bess,” she commanded.

Aunt Nan laughed, reaching out her own arms. Thinking her aunt was about to lift Bess, Kate bounded from her chair, picked up the little girl, and placed her onto her mother’s lap. When Kate straightened her little cousin’s gown, Bess grinned up at her.

“Ma belle.” Aunt Nan held her daughter close. She kissed her again and again. Bess laughed, her small, long-fingered hands, perfect miniatures of Aunt Nan’s, going to either side of her mother’s face.

Aunt Nan shared a smile with Kate. “What story shall I tell you?”

“Fine rooster?” Aunt Nan frowned, her face thoughtful while settling her daughter in her arms. At last, leaning back, she smiled, her eyes full of dreams, and began to recite:

Listening, Kate shut her eyes, relishing the warmth of the fire and the melody of her aunt’s voice. For the first time at court, she welcomed a sense of peace and homecoming.

The gift giving wasn’t ended that day. Kate gave her brother a new cap adorned with an ostrich feather, and he gave her a girdle book with the psalms of King David. Aunt Nan’s gift to her was a copy of The Consolation of Philosophy. “You’ve had mine long enough,” she said with a grin. “When our Duchess of Suffolk comes back, I want you to continue your discussion with her about the book’s teachings.” She then picked up Kate’s gift to her. She turned its pages and smiled. “I shall treasure this, knowing the hours you dedicated to the translation. I hope you will do more in the future. How about Consolation of Philosophy next time? From the Latin to English—now that would be a worthy task for you.”

To Kate’s great astonishment, Francis also gave her a gift. Entering the Queen’s chamber, he came to her smiling and bearing a lute, and held it out. “For you,” he said, sitting on the stool beside her. She took it, and looked at him in confusion. “A lute?” she blurted out. “’Tis too costly a gift.” She held it to her like a shield. “And I have nothing to offer you in return. Nothing.” He beamed a wider smile. “As for the cost, it is the lute I had as a boy—I play another now. As for you offering something in return, I would not call your friendship nothing, Kat. I crave pardon for not coming to you sooner and asking for forgiveness. I did not mean for you to suffer at my hand. I acted a villain forgetful of your youth.” He leaned closer. “Are we friends again?”

Kate averted her face. She wanted to weep. He spoke as if she was a child. A child? But wasn’t that better than him thinking her wanton?

She met his gaze and tried to smile. “Aye, friends.”

Emotion grabbed her by the throat and rendered her unable to say anything more. She turned to the burning fire, hoping she wouldn’t do or say anything foolish. Hoping she hid from him her real feelings. The days of separation had only increased her love of him. With a deep breath, she faced him with another smile—a false smile plastered upon a mask likely to slip at any moment.

He took the lute from her and strummed a few notes of a familiar song.

Kate winkled her brow in thought and the lyrics came to mind:

Pastime with good company
I love and shall unto I die;
Grudge who list, but none deny,
So God be pleased thus live will I.

Francis grinned. “Aye, the King’s. I’m glad you recognised it. It will please my father to learn that his coin was well spent with my lute master.” He cocked his head towards her. “Is it true you do not play?”

Kate locked her eyes with his, then, as quickly, lowered them. She swallowed hard before she dared to speak again. She couldn’t even look at him. “Who told you that?”

“Your brother. I asked him what I should give you as a gift, and he suggested a lute.” Francis brushed his fingers against the strings. “He says you spend too much time either reading or writing.”

Kate sat straighter in annoyance. “Did he? Did he really say that?”

Francis laughed. “Pray, do not tell him I told you so; he may never speak to me again.” He twisted towards Aunt Nan. “I saw the gift you made for the Queen. I don’t think your brother has ever pleased the Queen as you did today, even with the jewels he gave to her this morning.” Francis grinned. “It is good you are like your aunt and enjoy learning for its own sake. So, I take it that your brother is right and you do not know how to play the lute?”

“That brings me to my next question. Would you like me to teach you?”

Hope flared in her heart. “Would you?”

He nodded. “Aye.” He scrutinised her with great seriousness. “For friendship sake—only that.”

“For friendship sake,” she repeated. Understanding his meaning Kate bowed her head. Could she bear being alone with him as just his friend? Could she bear not seeing him at all? She swallowed. Her whole world seemed to revolve around this man.

“For friendship sake,” she echoed, praying she hid her tears. 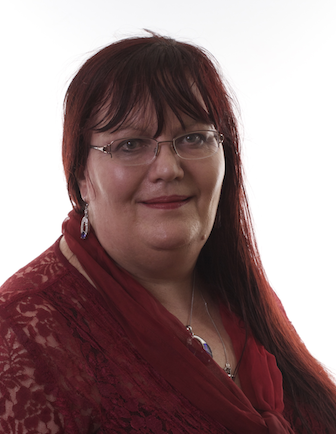 Wendy J. Dunn is an Australian writer who has been obsessed by Anne Boleyn and Tudor History since she was ten-years-old. She is the author of three Tudor novels: Dear Heart, How Like You This?, the winner of the 2003 Glyph Fiction Award and 2004 runner up in the Eric Hoffer Award for Commercial Fiction, The Light in the Labyrinth, her first young adult novel, and Falling Pomegranate Seeds.

While she continues to have a very close and spooky relationship with Sir Thomas Wyatt, the elder, serendipity of life now leaves her no longer wondering if she has been channeling Anne Boleyn and Sir Tom for years in her writing, but considering the possibility of ancestral memory. Her own family tree reveals the intriguing fact that her ancestors – possibly over three generations – had purchased land from both the Boleyn and Wyatt families to build up their own holdings. It seems very likely Wendy’s ancestors knew the Wyatts and Boleyns personally.

Born in Melbourne, Australia, Wendy is married and the mother of three sons and one daughter—named after a certain Tudor queen, surprisingly, not Anne.