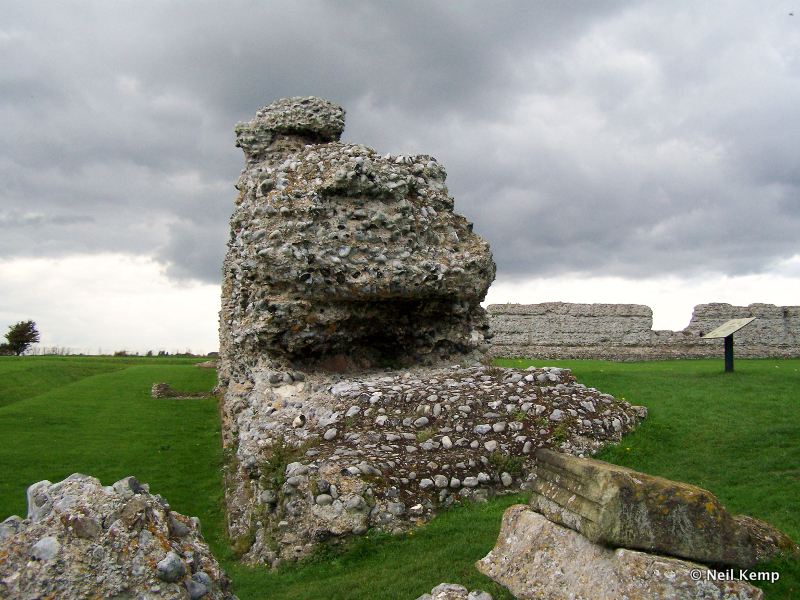 Richborough Roman Fort: Whatever happened to the Romans?

Whatever happened to the Romans?

Now, at first glance, the answer to the above question would seem self-evident. After all we don’t tend to bump into many Legionnaires whilst going about our daily business, do we? Well, actually, not that self-evident, as I’m referring to their place in history. Or, more specifically, their place in our conscious view of history.

Now, when I was at school the Romans were all the rage. Another high point came with television adaptations such as “I, Claudius” and seemed to continue right up to Russell Crowe unleashing hell on the big screen. So where did it all go wrong over the next decade or so? How have the Tudors become top of the pops? As The Stranglers could have sung: No more Neros any more. 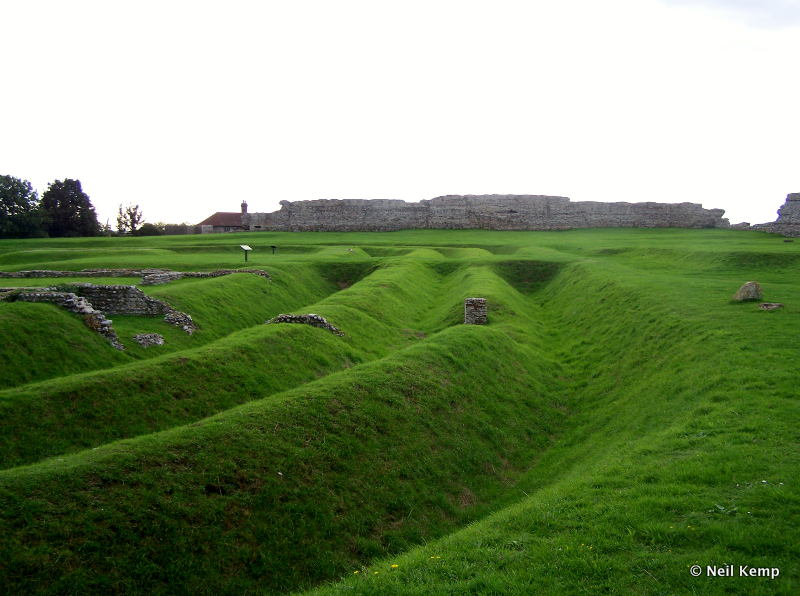 In a personal quest to find answers I ventured the few miles from where I live (Margate, in Kent) to the Roman Fort situated at Richborough. Now, on an historical level, Richborough has a lot going for it, being the landing site for the Roman invasion of Britain in AD 43 and also marking the starting point of the famous Watling Street, the main road to London during the Roman era. Richborough, or Rutupiae as it was known back then, was the major port for the Romans during the early years of occupation, even being favoured above Dover in most instances. The landing point was later marked with a huge triumphal arch, probably erected some years later to mark the total conquest of Britain (that’s as the Romans saw it, apparently Scotland didn’t count). The actual fort wasn’t built until the last quarter of the 3rd century in response to the threat of sea-borne raiders. Some triple ditch earthwork defences were in place before the stone walls were built, the walls themselves reaching a height of some 25 feet in some areas. Richborough was the first place to see Roman rule in Britain and it was one of the last places to see them leave. In short therefore, Richborough Roman Fort can be thought of as the most symbolically important of all Roman sights in Britain. 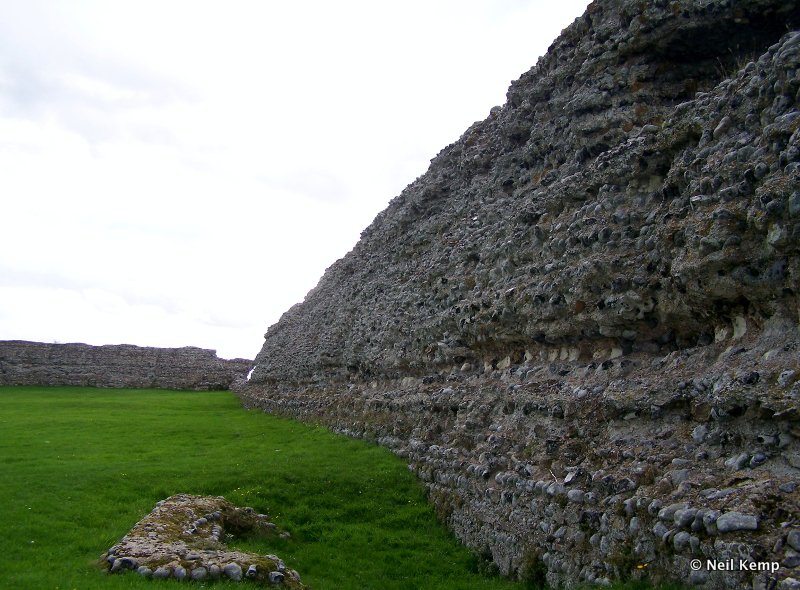 That’s where the good news ends, for Richborough Fort is a ruin. Not only is it a ruin but it is now over two miles from the sea which once skirted its very walls. A visit to Richborough therefore requires a lot of imagination. It’s a little like being handed a steering wheel and being asked to imagine what the car would have looked like. The walls in some areas are still impressive, along with the ditch work defences, but a lot of the area consists of bare foundations. I half expected Tony Robinson to jump out from behind a wall at any moment, trowel in hand and exclaim: “Join us after the break when we’ll see what this could have looked like to a Roman soldier stationed here in the 3rd century”. Yes, please. Where is Baldrick when you could really do with him?

A few earnest individuals dutifully followed my trail as we clambered up and down the ditches, followed the walls and peered at various foundation stones. I could see in the distance that our little band was about to be joined by a number of screaming schoolgirls on an away day visit. Doubtless, however dull they may or may not have found some old ruins, it was obviously a step up on being in class and therefore a cause for unbridled celebration. Unable to take any more excitement I retreated to the on-site museum, this is probably smaller in area than my bathroom. To be fair, it did contain many interesting items which have been found at the fort over the years. But, even going slowly, it probably took me all of 10 minutes to read and see everything that was on display. So, in the words of Simon and Garfunkel, I turned my collar to the cold and damp. 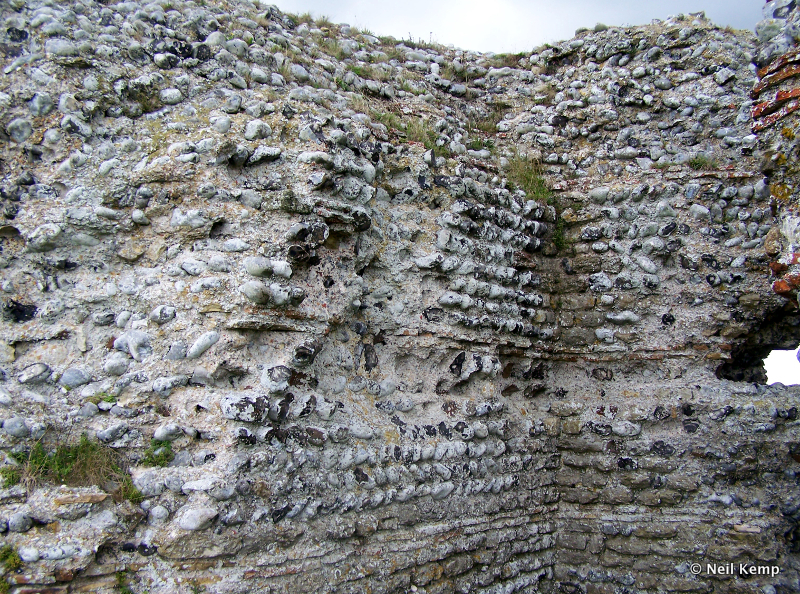 There, in a nutshell, was why the Romans had lost out to the Tudors in popular appeal. The Tudors, to a modern, technology savvy following, had it all, and, in many instances, continue to do so. We don’t need much of our imagination to see the splendour of their castles. They are, in the main, in pretty good shape. We can feast on them with our eyes. We can see their portraits, their possessions, their furniture, their clothes, their tapestries. We know what they ate and we see the links between the way they lived and our modern society without even trying too hard. Tudor England is alive and well and on splendid display in England. The glory that was Rome is simply showing her age and is in any case, in the main, on display in Italy.

Book after book is now published on Tudor England, either factual, or more popularly, being some form of historical fiction concerning Tudor England and the peoples that lived during that time. Television seems to pour out a never ending glut of Tudor based programmes which, in many cases, bring a new awareness of the books that some are based on. Success breeds success and, with an ever increasing audience to satisfy, established and new authors seemingly manage, between them, to effortlessly bring at least one new Tudor book to fruition every week. What was the last Roman based book you can remember?

It is, of course, also a lot more comfortable to walk around the interior of a castle or palace rather than scramble around some ruins continually at the mercy of the elements.

Did I enjoy my visit? Well, yes I did. I used my imagination and got some good exercise into the bargain. I found myself having pity for the poor souls that I imagined would have been stationed at Richborough. The East Kent marshes are a place I wouldn’t like to be caught in after dark now, heaven knows what it must have been like the best part of two thousand years ago. It’s a cold, damp and windy environment, and that’s just the summer. Imagine coming from a nice warm homeland like Italy and ending up in Kent marshland, freezing cold, wet, in fear of possible hostiles and suffering from non-stop stomach ache (a frequent complaint of soldiers stationed at Richborough).

As I made my way back home, driving through a sea that no longer exists, to an island that is now no longer an island (the Isle of Thanet), I did ponder one final conundrum. How come, after 367 years in a harsh environment, the mighty Roman army, so adept at military tactics and possessing such consummate skill in all facets of warfare and civilian comfort, still left here wearing sandals?

Am I planning another visit to one of England’s heritage sites? Yes, I am. Where? Well, to a Tudor castle of course. What a silly question!