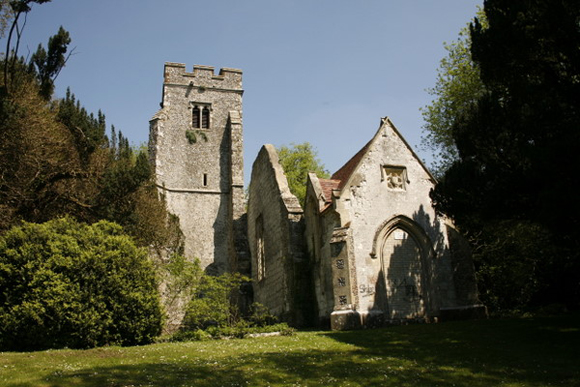 The ruins of St. Mary's Church

The Lost Son of Richard III? The Search for Richard Plantagenet

The grave of King Richard III may have been discovered, but the mystery of Richard of Eastwell, a reclusive bricklayer who claimed to be Richard Plantagenet, the illegitimate son of the last Plantagenet king, has yet to be solved.

He arrived in Eastwell in 1542 or 1543 seeking employment, naming himself simply ‘Richard’. He only confessed his secret to his employer, Sir Thomas Moyle, after Sir Thomas caught him reading a book in Latin and asked where he “come by this learning.” Sir Thomas accepted Richard’s story that he was an illegitimate son of the late king and had spent his life assuming another identity, and later allowed the elderly Richard to build a one-room house on his estate. Whether he believed the story or was just humouring him is impossible to know. Richard Plantagenet, in any case, stayed in Eastwell until his death. His name was recorded in the parish register under the year 1550 ‘Rychard Plantagenet was buryed the xxij daye of Desember, Anno ut supra‘. The register is a copy made in 1598 by the then vicar, Josias Nicholls. The original paper register no longer exists, however that year all existing paper registers were copied into vellum books, and it appears to be genuine. The tomb pictured above however, on which his name is inscribed, almost certainly belonged to Sir Walter Moyle, the great-grandfather of Sir Thomas Moyle.

Read more about the legend of Richard of Eastwell

Richard Plantagenet remains an enigma, while there may have been no evidence to prove his identity, there was also no evidence to disprove it, until now. Since the DNA of Richard III has been discovered, it would now be possible to confirm whether or not Richard Plantagenet was indeed of the York bloodline. St. Mary’s church, where he is buried, has been derelict since the 1950’s and is now owned by a national charity. The owners welcome an investigation, but things may prove difficult.

Matthew Saunders, director of the Friends of Friendless Churches which took over St. Mary’s church in 1980, told Kent Online that he would support excavations or testing to see if Richard was a descendant of the king. “One of the ways to be certain about it would be to take a DNA test of the bones. It would be an enormous task as that churchyard is probably full of 2,000 bodies, unless they do a localised search under the tomb. If they wanted to try and find him we would be delighted.”

It may seem an impossible task with so many people buried at the site, but Councillor Winston Michael, who represents Eastwell and Boughton Aluph on Ashford Borough Council, remains enthusiastic. In February he said he had been in contact with the University of Leicester, who along with the Looking for Richard team found the remains of Richard III, about the grave asking them if they would be interested in carrying out work on the site.

Councillor Michael gave us an update on the investigation. “I have met with members of the Richard III project team and the issue is one of identifying the location of the grave, so there is much investigation to locate documents that might give some clues before any digging takes place,” he said “This was precisely the position with their work on Richard III.”

He added “I hope to move matters forward over the coming months through seeking help from those with the knowledge and the wherewithal to open doors to get access to archived documents etc.”

However not all the residents of Eastwell share his enthusiasm. “Some local inhabitants are against my doing anything as it could prove the stories about Richard of Eastwell to be unfounded,” he said “So I am having to approach all matters carefully.”