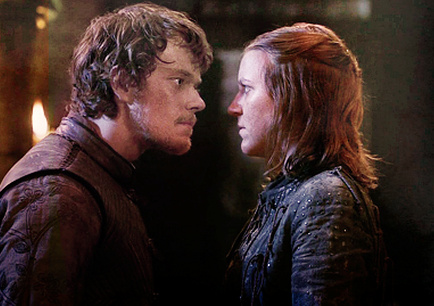 The Real Game of Thrones: How the Greyjoys Made Theon

It is one of the most powerful moments in Season Two of Game of Thrones. Ron Donachie’s delivery of Ser Rodrik Cassel’s final words in the face of death was truly heartbreaking. It is not only that we lost a beloved ally of the Starks, not only that the North had wept oceans of blood already. We also see Theon finally fall into a deep pit of darkness and despair that he may never emerge from.

Now you are truly lost 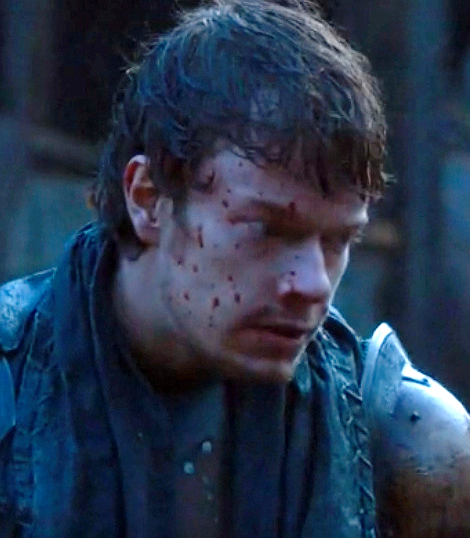 In the books it is Farlen, the kennelmaster at Winterfell, who Theon executed, accusing him of killing three of Theon’s ironborn.

“As he knelt to the block, the kennelmaster said, “M’lord Eddard always did his own killings.” Theon had to take the axe himself or look a weakling. His hands were sweating, so the shaft twisted in his grip as he swung and the first blow landed between Farlen’s shoulders. It took three more cuts to hack through all that bone and muscle and sever the head from the body, and afterward he was sick, remembering all the times they’d sat over a cup of mead talking of hounds and hunting. I had no choice, he wanted to scream at the corpse. The ironborn can’t keep secrets, they had to die, and someone had to take the blame for it.” Theon A Clash of Kings pg 944

It was at this point, in the television series, that I thought Alfie Allen really captured Theon, sword and limbs swinging wildly, his horrified, nauseated and  blood spattered face. As if Theon realises at that moment he has truly lost control of himself and can never turn back.

And then Bran and Rickon escaped.

Oddly, Alfie commented to Rolling Stone that he thought Theon would enjoy tricking the village into thinking the miller’s boys were Bran and Rickon. “When I was shooting it, I had a bit of a problem. There’s this look of regret that I gave when the bodies of the two children get raised on the ropes. I look torn about it. And I always thought Theon would just enjoy playing the trick on the whole village. That’s how I would’ve liked to have played it. Then we sat down with David and Dan and [director] David Nutter and decided that there needed to be some sort of regret there, to make it morally correct.”

Well, Theon does regret having to murder the miller’s boys.

“He took no joy from those heads, no more than he had in displaying the headless bodies of the children before the castle. Old Nan stood with her soft toothless mouth opening and closing soundlessly, and Farlen threw himself at Theon, snarling like one of his hounds. Urzen and Cadwyl had to beat him senseless with the butts of their spears. How did I come to this? he remembered thinking as he stood over the fly-speckled bodies.” Theon A Clash of Kings pg 946

Theon burned the miller’s boys bodies. He kept a shard of melted silver, all that remained of the wolf’s-head brooch that had once been Bran’s. 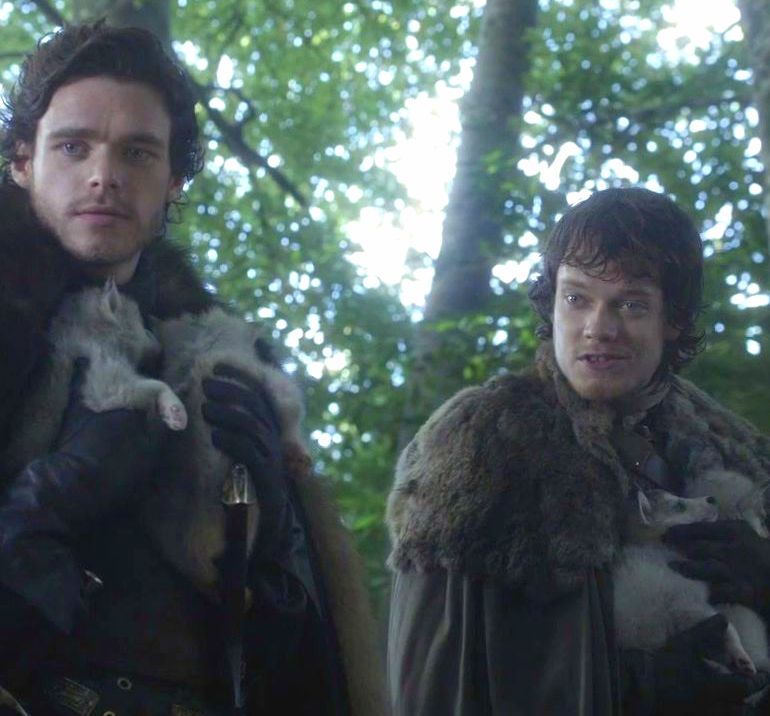 We all shed tears for a shining-eyed Robb Stark lamenting sending two thousand men to their deaths to create a diversion so he could capture Jaime Lannister, and spit on Theon for murdering a handful of people at Winterfell. Thousands of men die for Robb’s vengeance. But the murder of children is unforgivable. Even if the reader knows Theon did not kill Bran and Rickon. The miller’s boys were innocents.

But what we need to look at is why we think Robb’s family loyalty more important than Theon’s loyalty to his own family.

There is a general notion that Theon should feel loyalty to the Starks over his own family because the Starks raised him. The Starks did ‘raise’ Theon, as a hostage. Theon is not a valued member of House Stark, he is not formally adopted, and he is not a ward. That would be like saying Sansa Stark is a ward of the Lannisters. Eddard Stark can call him what he likes, but what Theon truly is is a ten year-old boy taken prisoner by foreign strangers after his father’s rebellion against the crown failed and his two elder brothers were slain in battle. A frightened ten year-old boy snatched from his family. And a hostage for his father’s good behaviour.

“As if ten years in Winterfell could make a Stark. Lord Eddard had raised him among his own children, but Theon had never been one of them. The whole castle, from Lady Stark to the lowliest kitchen scullion, knew he was hostage to his father’s good behavior, and treated him accordingly. Even the bastard Jon Snow had been accorded more honor than he had.
Lord Eddard had tried to play the father from time to time, but to Theon he had always remained the man who’d brought blood and fire to Pyke and taken him from his home. As a boy, he had lived in fear of Stark’s stern face and great dark sword. His wife was, if anything, even more distant and suspicious.” Theon A Clash of Kings pg 219

Theon always wanted the approval of the Starks.

“I know who you are. I know what you are. Now answer my question. Why do you love the Starks?”
“I …” Theon put a gloved hand against a pillar. “… I wanted to be one of them …”
“And never could.”

It is true Robb did not try to make Theon feel like an outsider. But then Theon did not set out to betray Robb. Theon was on his way home with high hopes, of securing a treaty between Robb and his father Balon Greyjoy.

Robb wants to offer Balon Greyjoy a kingship over the Iron Islands if he ravages the Lannisters’ coast with his longships. Balon’s uprising against the Iron Throne nine years prior to the events of Game of Thrones ended in disaster. Balon tried to secure independence for the Iron Islands and restore their traditions of old, lost almost three hundred years before, during the War of Conquest. The rebellion was crushed and Balon  was forced to surrender. Obviously the treaty would give Balon power and glory, but Theon has his own inheritance on his mind.

“His father’s war was long done, and lost. This was Theon’s hour—his plan, his glory, and in time his crown.” Theon A Clash of Kings pg 213

Theon wants to find his place. It is true he will eventually do some terrible – and unforgivable –  things to gain it. We should not absolve Theon of his crimes. But nor should we absolve his family of their crimes against Theon. 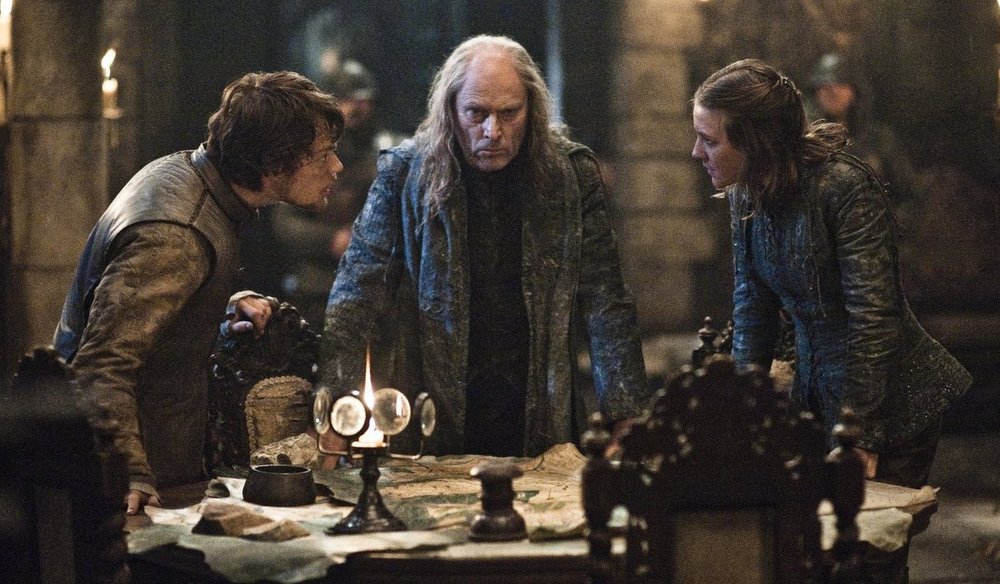 We Do Not Sow

“…he saw no familiar faces, no honor guard waiting to escort him from Lordsport to Pyke, only smallfolk going about their small business. ” Theon A Clash of Kings pg 214

Is Theon showing his arrogance here, or is it some wishful thinking beneath his swagger and bravado? He thinks he could not expect his father to come and greet him, Balon Greyjoy, Lord of the Iron Islands, but surely he would have sent someone. That someone is his uncle Aeron, suspicious and unwelcoming, who insists on baptising Theon before he takes him to meet his father. And his first meeting with his father is nothing short of a disaster.

Theon is the last surviving son and heir apparent of Balon Greyjoy. Theon is expecting to come home to his inheritance, to be reunited with his family and restore them to glory. When Theon, reasonably, attempts to persuade Balon to ally with Robb Stark, Balon refuses, lashing out at his son.

To Balon, Theon is a reminder of his crushing defeat, the death of his sons and everything he has lost. If Theon was hoping to fare better with his sister, his hopes are dashed after Asha – who Theon does not recognise – tricks him into flirting with (and fondling) her, making him look and feel like a fool. To Asha Theon represents a threat, one that must be vanquished.

“Theon took the empty seat beside Asha. Leaning close, he hissed in her ear, “You’re in my place.”
She turned to him with innocent eyes. “Brother, surely you are mistaken. Your place is at Winterfell.” Her smile cut. “And where are all your pretty clothes? I heard you fancied silk and velvet against your skin.”” Asha to Theon A Clash of Kings pg 468

As Theon thinks soon after, when Asha has succeeded in humiliating him by spilling his dinner over him and making a spectacle of him in front of the whole hall: “Half my life I have waited to come home, and for what? Mockery and disregard? ” A Clash of Kings pg 470

Theon’s attempt to finally have a place in a proper family, after being held hostage for all of his formative years, is futile. In place of the respect he craved – the sort of respect the Stark heirs enjoyed – he received humiliation. Even after Theon readily obeys his father in moving against the North, obviously desperate to win his approval, Balon insists on disgracing Theon further by sending Asha to take Deepwood Motte and Theon to raid fishing villages on the Stony Shore. One might think that even had Theon proved himself he would never have won Balon’s approval. Would any deed have been enough?

Theon has wronged his family only by being held hostage after their defeat. He was the living reminder of a bitter and broken Balon’s failures.

It is perhaps why Theon has gathered a lot of sympathy from A Song of Ice and Fire readers. He is a polarising character. Many readers are not prepared to forgive Theon, or believe he can redeem himself. But there are as many who want him to redeem himself. Theon is weak, yes. Theon is arrogant and cruel. But Theon was broken long before Ramsay Snow got his hands on him.

“How is it you still breathe?”
“The gods are not done with me,” Theon answered”

Neither are we, it would seem.