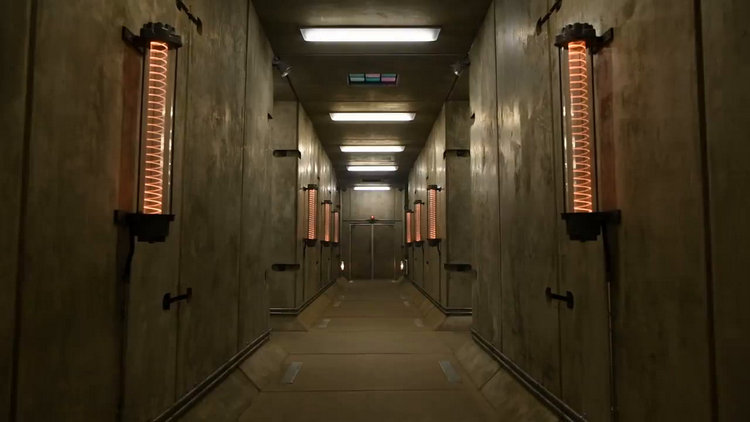 His Dark Materials Book to Screen Analysis: Episode 6 ‘The Daemon-Cages’

Philip Pullman once said that “There are some themes, some subjects, too large for adult fiction; they can only be dealt with adequately in a children’s book.” Northern Lights is told almost entirely from Lyra’s perspective, but His Dark Materials has been giving the adult characters equal screen time. The results have been immersive, particularly in the case of Ruth Wilson’s captivating performance as Marisa Coulter. Last week’s episode, The Lost Boy, gave us a glimpse of the horrific experiments the Oblation Board are carrying out on children and the consequences, in this case the death of Billy Costa. The Dæmon-Cages takes us straight to the heart of The Station, Bolvangar, the ‘fields of evil’, and the religious zealotry that drives the adults to harm children in the name of sanctity. And it tells us why, without shying away from the obvious similarities between the Magisterium and Abrahamic religions.

The episode opens with Lyra being led through the spider’s web of passages in Bolvangar to the dining room, where she sees Roger. But it’s not a joyful reunion, not long after Bridget McGinn is called from the dining room by Doctor Cooper and Sister Betty. As Bridget is marched down the corridor and locked behind the door, Sister Clara’s traumatised stare fills the screen. Clearly she is reliving this as the grinding noise of the machine slices Bridget from her dæmon, before Doctor Cooper strides past Clara and snaps her fingers, jolting her out of her nightmare. Clara’s later reluctance to close the door on Lyra in the machine shows that Intercision has not made Clara the obedient slave the Gobblers seek, and while she (appropriately) does not help Lyra later on, she stands aside as Lyra runs, while she remembers her dæmon Nicholas and how much she loved him. 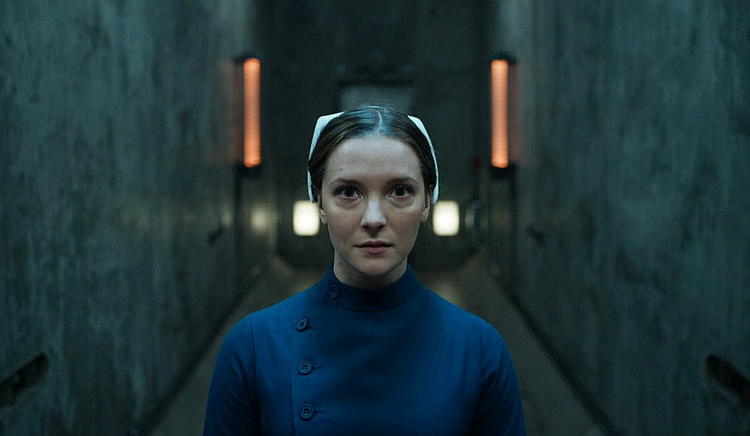 Lyra and Mrs. Coulter’s scene was the absolute stand-out of the episode. Mrs. Coulter makes a grating and self-pitying speech about the great and noble work of the Oblation Board, her life’s calling, while Lyra challenges and rails at her, with Mrs. Coulter tearfully concluding that “one day you will see all that I have done to right this world for you”. Lyra’s jaw sets, and it is obvious that Lyra can see behind her mother’s tears. Whether Mrs. Coulter is play-acting here is questionable, Marisa is a hypocrite who thoroughly believes her own lies. She still poses a slight challenge to Lyra after her tearful remonstrances, that Lyra must decide who she belongs to. There can be no doubt that Lyra’s steady look and easy lies means she will never belong to Mrs. Coulter, and with that she is free of the bonds that tie to her loathsome child-murdering mother. For now at least. But Lyra has more than one father. After she tricks Mrs. Coulter into opening the tin containing the spy fly Lyra smashes the electronic lock on Mrs. Coulter’s room. As Lyra batters at the lock she roars a challenge, bear-Lyra screaming savagely at her enemy with the fire of a panserbjørne, while Mrs. Coulter screams back in rage and frustration as a monkey.

I was surprised at the brevity of the escape from and battle at Bolvangar, but it was, nonetheless, an effective and engaging scene with various interest points. It was a sprawling series of events in Northern Lights, and this episode keeps it very much contained within Bolvangar’s passages, for which the spider web network of passages works well. One of those interest points was Ma Costa’s brutally efficient murder of Dr. Rendal, the doctor who was expressing doubt against Dr. Cooper’s sanctimonious ideals. Up until now the killing, on the heroes’ side, has been kept to strictly bad characters, even Lee only pick-pocketed men who were complicit in keeping Iorek imprisoned. The slaying of Dr. Rendal was a surprise, and not an unwelcome one, for it drew a distinct line between doing good and doing evil. Dr. Rendal, was, after all, not doubtful enough to stop assisting in the deaths of children. 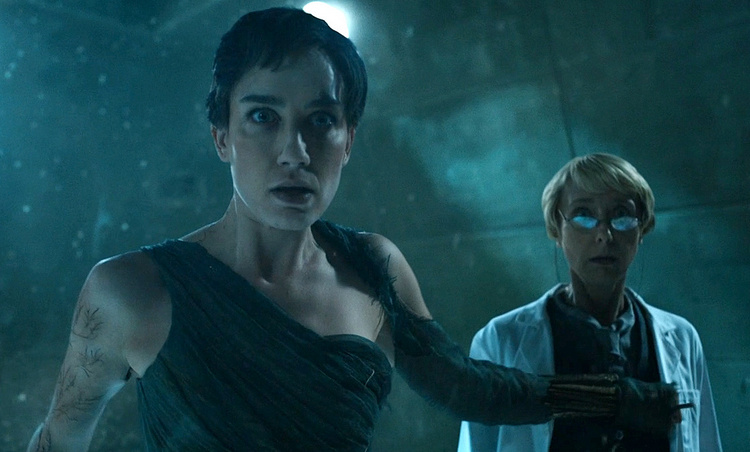 Roger had a shining moment this week and it was pleasing to him him with so much agency, assisting the severed children to escape, giving them hope with his brief but heartfelt speech. The shaved heads of the children references the sort of Holocaust imagery that is burned into much of Western humanity’s minds. The Magisterium are, after all, torturing their own for ideology. In the last moments of the battle when hope is failing, Serafina Pekkala arrives and leaves in one breath, finishing off the Tartars threatening Lyra and plunging an arrow shaft into the heart of Doctor Cooper, exhaling, and taking flight again while Lyra gazes up wonderingly, and Coram longingly. Mrs. Coulter cowers behind the door as Roger leads out of the severed children, and the Gyptians, after a moment’s shock, gather around the severed children. As Lyra’s embraces Bridget, a teary-eyed Mrs. Coulter pulls the door closed behind her, a coward, not a mother. It was Serafina, mother of many, that had the last word.

Some of Serafina and Lee’s conversation from chapter 18, Fog and Ice, is played out as Lee flies Roger and Lyra, along with Iorek, to Asriel, only here it is geared towards an destiny entangled between Lyra and Lee. Serafina names Lee as Lyra’s protector, while he looks disbelievingly at her, moments after admitting that Serafina has blindsided him with his love for Lyra, he asked “So she’s responsible for the fate of everything, and I am responsible for… for her?” He looks breathlessly after Serafina as she flies away, the realisation dawning on him that he has become both a father to Lyra and pledged to protect her. 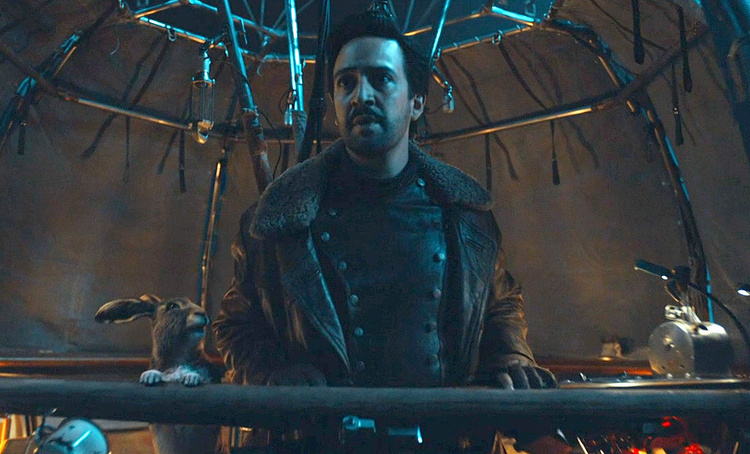 The penultimate scene shows the Gyptians securing the severed dæmons and preparing for the journey home. Ma’s promise to look after the children if their parents reject them was a sentimental reminder of the Gyptian’s close-knit and inclusive community, and this is another scene we did not see in the books, but works so well tied into the story.

On another note it seems that people have become so used to ham-fisted and obvious Hollywood writing that our imaginations aren’t getting enough exercise. There is plenty of exposition in the series, and there has been plenty of indicators that in Lyra’s world dæmons are extremely important to humans, it has been explained that they are a ‘part of the soul’ and we see people’s lives depend on them. If the point wasn’t driven home last week with Billy’s death, then the zombie-like countenance of the severed children should have made it clear this week. Yes it is correct that dæmons have much more interaction with their humans in the books, but that means we only need to see the person on-screen interacting with their dæmons at that time. Dæmons also often ‘think’ things to their humans rather than always verbalise. And they talk with other dæmons but not frequently with other humans. Book readers should be able to stretch their imaginations a bit here, yes I would certainly like to see more dæmons on screen, but those complaints are usually met with answers about finance. I can’t agree that the death and catatonic states of the severed children hasn’t made it obvious to people who have yet to read the books. The lack of dæmons is certainly not enough to ruin what has been a thoughtful and beautifully acted adaptation so far. 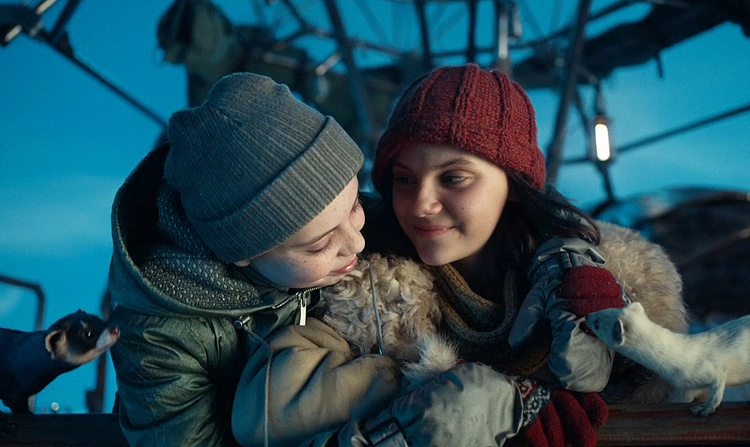 This week’s episode covered four chapters and made some major departures from the text, mainly in terms of condensing the material. I am not going to pretend that I wasn’t holding out for Lyra, flanked by the captured children, standing courageously in front of the fiery ruins of Bolvangar and attempting to hold off armed Tartars before the witches emerge from the darkness to cut them down. There were a lot of elements of Bolvangar I enjoyed over the last two episodes but it was distinctly different from Northern Lights, where the children lived in a strange bubble of denial. While the concrete industrial look worked well as a sort of mirror of the inhumanity of Bolvangar, there are attempts to mask the air of death with a tropical mural in the dining room, for example, and the false cheeriness of the place was really only played out by Sister Clara, who kept insisting it was the best place in the world. The children themselves were very different, with the jaded lot in The Dæmon-Cages a stark contrast to the children in Northern Lights, who do not openly stare at Bridget while she is led out of the dining room, but look away. Frequent references are made to being killed with a matter-of-fact air, but the children also state that they were afraid of the Gobblers before they got caught. Now they live a sort of dreary and boring existence, but they are not afraid. Still, they discuss death all the time.

Much of Lyra’s agency was taken away in the break from Bolvangar, she did not lead the children out herself after blowing up the kitchen, but was lost in the confusion and noise. She also didn’t lead the children across the tundra to meet the Gyptians, only to be attacked by Mrs. Coulter again, instead Serafina neatly finished off the Tartars and Doctor Cooper inside the passages. Still, there were a lot of elements to these scenes that worked very well, particularly the appearance of the severed children, Roger being given more time to shine, because as much as he means to Lyra he often gets a bit lost in all the big events in Northern Lights. The penultimate scene also finally answers the question of what happened to the severed dæmons and whether they found their humans again. Kaisa took on this task in the book but the Gyptians taking responsibility for them makes sense. Overall this episode successfully packed a lot of text in, more than I remembered from my last read some years ago. A look at next week shows what I suspect will be more budget-necessary changes, although I would like to see a semblance of Iofur’s overdone, humanised palace, I suspect, judging by the trailers, that we are going to see another scaled-down version. 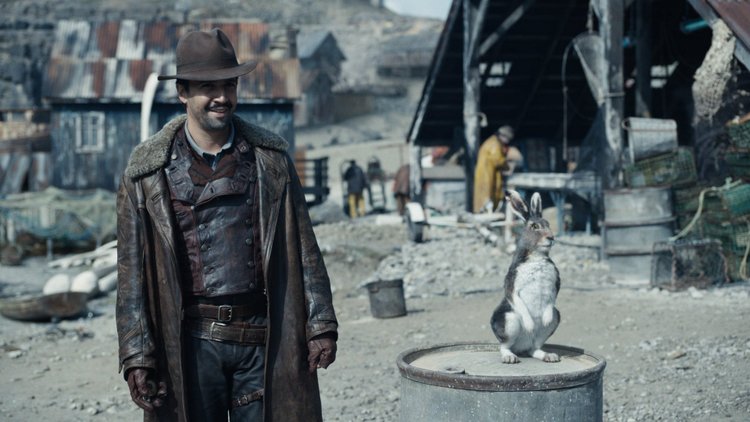 I seem to be always preoccupied with Alamo Gulch, but Lee has always been a favourite character and I have always been sad Lyra never got to say goodbye to him (and Iorek’s goodbye was somewhat horrifying). The scene between Lee and Serafina worked particularly well on a screen level. Lee’s desire to adopt Lyra as his daughter is something he confesses to the witches in The Subtle Knife and as we may well never see that meeting on the screen it is important to establish Lee as one of Lyra’s father figures. There is also some difficulty with Iorek in this respect. A book reader knows the love Lyra feels for Iorek, but it is Lee that tells us if a bear could ever loved a human, he loves her. I wonder if next week we will see some of Lyra’s bear ritual, eating raw seal and sleeping covered in snow as the bears do.

Next week: The Fight to the Death