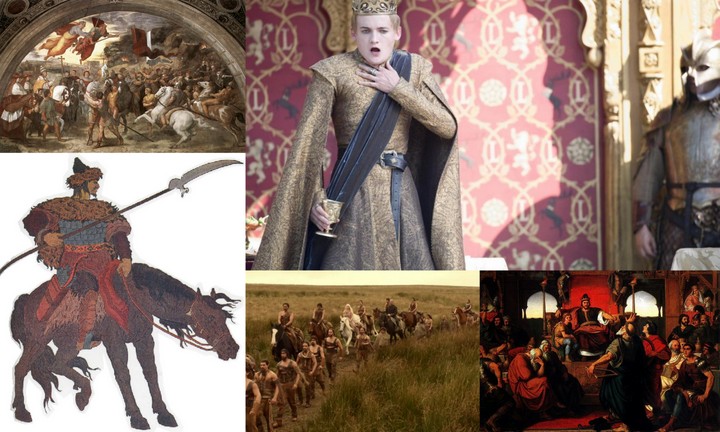 History Behind game of Thrones' Atilla the Hun series

History Behind Game of Thrones: Attila the Hun – A 1500 year-old Murder Mystery

Olga Hughes
Game of ThronesHistory
May 28, 2014
Did a 1500 year old murder mystery inspire George RR Martin’s Purple Wedding? While George R.R. Martin mentioned recently that Prince Eustace, the eldest son of King Stephen, was part of his inspiration behind the Purple Wedding, History Behind Game of Thrones‘ Jamie Adair takes a look at her alternative theory in her series on Attila the Hun.

The four-part series kicks off with A Motive for Murder, introducing us to the warrior tribes the Huns, their martial skills and horsemanship. The infamous Attila the Hun was one of the most successful barbarian leaders who ever attacked the Roman Empire, an empire which was becoming increasingly weak and vulnerable.

Read Attila the Hun: A Motive for Murder?

“Attila loved the fear his sieges provoked,” writes Jamie “No doubt he chose many of his atrocities to grow his legend.”  Part two discusses Atilla’s blunt diplomacy, his complete intolerance for deserters, the stranglehold he had over the Romans and the fate of Honoria — the sister of the Western Roman emperor, Valentinian III, whose proposal to Atilla would have dire consequences.

The third instalment in the series gives us a fascinating insight into the parallels between the deaths of Atilla the Hun and Joffrey Baratheon at their own weddings, and why George R.R. Martin may be concealing a historical spoiler.

The latest instalment in the series is a fascinating discussion in which Jamie interviews Liberty University historian and philologist Dr. Michael Babcock about his book The Night Attila Died: Solving the Murder of Attila the Hun.

Accept no flimsy mass-market imitations! To read about the real, gritty history behind Game of Thrones visit History Behind Game of Thrones. Also featured this month – more on Theon Greyjoy and George Duke of Clarence, Pagan Sacrifice and Ancient Religion, Isabeau of Bavaria and Margaery Tyrell and a look at cannibalism from the Thenns to Hansel and Gretel. And the latest in the very special Anne Boleyn series features the wonderful Elizabeth Norton discussing Anne Boleyn’s first love, Henry Percy.