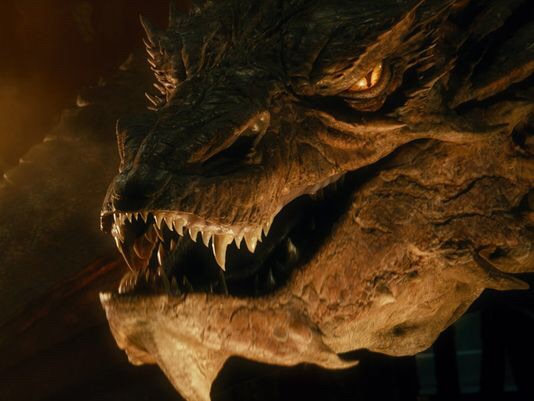 There have been complaints from some quarters of the Internet about The Hobbit Trilogy, and especially the final magnificent instalment, The Battle Of The Five Armies. It’s too long, the Internet has said, also, it’s too short. I don’t like the romance. I don’t like the She-Elf the filmmakers invented. There’s too much gimmicky sword fighting. There’s not enough gimmicky sword fighting. What’s with Legolas’s face? Why does he do elvish parkour? Did he learn that trick from Sonic The Hedgehog? Some bits are cheesy. It’s too Hollywood, it’s too gamicious, it isn’t as profound, as epic, as grand a saga as The Lord Of The Rings Trilogy.

Of course the fault is not in the film series, but in your perception, in your expectations, in the way you are watching it. This guide is not a guide to the story, the intricacy of details. It will not tell you the names of Dwarfish Battle Pigs, the powers of whatsisname The Blue, who defeated who in the First Age, how wooden barrels could possibly survive being pummelled through fierce mountain rapids, or how an Elf Maiden, however cute, could possibly use Athelas to heal a morghul wound when only a King Of Gondor can effectively employ the magic of that herb. There are plenty of blogs, articles, commentaries, wikis and even books that detail and debate all of that.

J.R.R. Tolkien’s The Lord Of The Rings is both a fantastic adventure and an epic historical saga on a mythological scale, Biblical in the grandeur of its drama and its poetry. J.R.R. Tolkien’s The Hobbit is a children’s fable derived from that mythology. To make a film that captures the scope and language of the former is a superb achievement, to create a film that joins the children’s fable to the legend requires the addition of characters and events, scenes and dialogue, to do so using the forms of a Hollywood adventure film is to elaborate the one, and reduce the other. Tolkien’s grasp of the grand poetics of legend, myth and saga is something acquired from years of study, contemplation, love and dedication. It is not surprising that film makers, though they have a passion for the work, cannot achieve the same presence. Though what they did achieve, in the restrictions of the media, is of course, magic.

However, this is not a guide or a debate on those issues. This guide is straightforward advice on the act of physically watching.

So, find the biggest, most high definition screen that can practically fit in a lounge or TV room. Add to it a home theatre sound system, almost loud enough to wake the trolls next door. Gather the Extended Edition Blu-Ray (or if needs must, DVD) of The Hobbit: An Unexpected Journey, The Hobbit:.The Desolation Of Smaug, and The Hobbit: The Battle Of The Five Armies. (Note – this last may not be released quite yet.)

Beards and rings may be worn. Elvish weapons should be left at the door. You will need snacks, and libations. Comfortable couches. A remote with a pause button (most important). An Internet connection with devices to check facts on the aforementioned wikis, blogs, websites and wordpresses. Gather Ye a selection of nerds, fans, devotees. A dedicated few to join you on your quest. Let’s call them a fellowship. Speak Ye neither Dothraki nor Klingon. Disreputable folk may crack a casket of Old Toby.

Because while these films are magnificent in the cinema, they are at their finest in the living room, in their complete form, with all the extras, all the songs, and details, mysteries and revelations, faults and foolishness, curiosities, and cameos, debates and disagreements, facts to be delved, and treasures to be discovered. An uproarious journey shared in good company. Because, even when going on an adventure, like a Hobbit, there is no reason not to share good friends, good food, a warm hearth, and all the comforts of home.