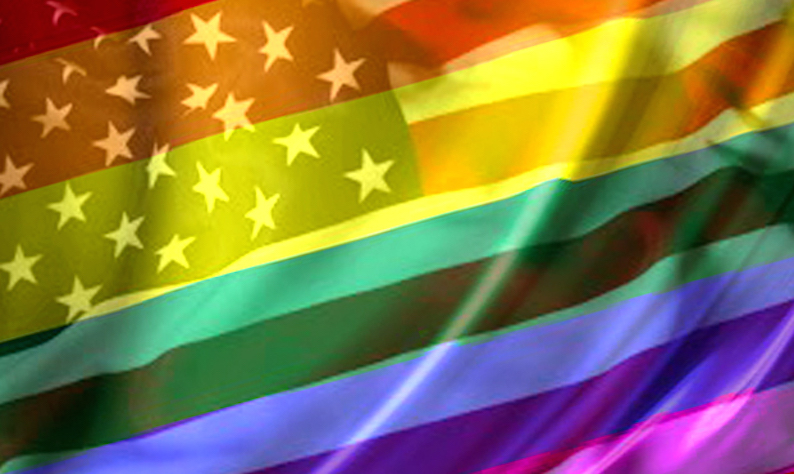 Sometimes law is a blunt instrument, used by politicians to hammer people’s lives in a certain direction, an ugly fabric of exception, exclusion and limitation, to bind, to shape to force. On rare occasions, law is a thing of beauty, when it enshrines, when it creates, when it frees.

In the Supreme Court of the USA on Friday, June 26, 2015, in a vote of 5 to 4 dissenters, marriage for some sex couples across all 50 states of the USA was made law.

The Supreme Court examines cases that may have far reaching consequences politically and socially, and determines if something is legal under current U.S. laws and under the Constitution. It is of course a little more complex than the process of reason and logic that implies, the personal beliefs, the politics, the biases and emotions of the Justices and the nation inevitably come into play.

Sometimes the merest weight of the human heart may restore balance to the scales of history, and what seems eminently sensible, fair, just, right becomes unquestionable, beyond dispute.

The dissenting voices express their complaint but it falls apart, it has little sense, neither heart nor eloquence nor reason. It is ugly, clumsy, confused. There is nothing to sustain it except the fading prejudices of distant eras.

Justice Scalia in a rambling dissent finds the opinion a threat to both America and to democracy, that the law regarding marriage is a decision best left in the jurisdiction of the states and elected governments, that it is an abridgement of States’ Rights.

The majority opinion finds the right to equality guaranteed under the 14th Amendment of the Constitution, enshrined after the Civil War to establish equality under the law to all, including freed slaves, and to restrict the rights of states to make laws contrary to that principle, also applies to marriage.

In a clumsy and convoluted piece of legalese dissenting Justice Scalia finds that under that same 14th Amendment, as the People never specifically decided to prohibit the limitation of marriage to opposite-sex couples, for the Supreme Court to then enact law that prevents states from outlawing same sex marriage, is to prevent what was an ongoing democratic debate.

That argument ignores the very nature of the social contract, that some things are fundamental, inalienable, to everyone. Not merely law, but the very fabric of society. If we are to uphold the right of every state and jurisdiction to make arbitrary laws then we do not have democracy, we have feudal fiefdoms.

He deplores the language of the decision, but in his own outrageous hyperbole finds that “lacking even a thin veneer of law” the opinion has ended democratic debate, and further “buried beneath the mummeries and straining-to-be-memorable passages” usurped power from the democratic process and created a “system of government that makes the People subordinate to a committee of nine unelected lawyers.” He argues the invalidity of the Supreme Court, if the decision had been in the dissenter’s favour, wouldn’t his argument on the invalidity of the court also necessarily still be valid?

Paragraph after paragraph of this rigamarole continues, with appeals to tradition, with appeals to the unrepresentative, undemocratic nature of the Supreme Court. He disingenuously pretends that appointees to the Supreme Court are made solely on their skill as lawyers, that they aren’t political appointments, he considers the question being put to this unrepresentative body is whether the “American people had ever ratified a constitutional provision that was understood to proscribe the traditional definition of marriage.”

He declares the hubris of the judges who made this judgement, then continues with an appeal to former Justices and the great legal minds of ages past, to the Constitution, to the situation accepted by every nation in history and to the “unanimous judgment of all generations and all societies.” We can only stand aghast at his own hubris in assuming to know the mind and opinion of seemingly the entirety of every civilization past, and simply counter by putting the question, did anyone ever ask these former generations? Then how can anyone assume to know what they may have answered?

He finds the style of the opinion pretentious, its content egotistic, containing silly extravagances, of thought and expression, with “showy profundities” that he finds profoundly incoherent, and proceeds with a semantic dissimulation, pretending that the meaning of some very simple words are somehow confounding. “Really?” “Huh?” “What say?” he quips, misconstruing the meaning of freedom, the meaning of spirituality, the meaning of intimacy, making appeals to disciplined legal reasoning seemingly in the vernacular of a sassy tween. One expects an “OMG!” or “LOL!” to be the next pointed argument in his legal dissension.

He decries the language of the majority opinion, favouring it seems contortionate logic, confusing technicality, legal reason and possibly gibberish. But the law that we remember, the law that most moves us, the law that we most understand begins with phrases like, “We the People,” and include appeals like “liberté, fraternite, unité, égalité” and ends with statements like, “and justice for all.” This is what we understand by law, these are the ideas we can all agree on, this is what binds us.

Law is more than mere rules and commands to control our selfish and our worst instincts, it should also be a noble thing, to encourage our best.

The last clause of the Supreme Court’s majority opinion reads,

No union is more profound than marriage, for it embodies the highest ideals of love, fidelity, devotion, sacrifice, and family. In forming a marital union, two people become something greater than once they were. As some of the petitioners in these cases demonstrate, marriage embodies a love that may endure even past death. It would misunderstand these men and women to say they disrespect the idea of marriage. Their plea is that they do respect it, respect it so deeply that they seek to find its fulfillment for themselves. Their hope is not to be condemned to live in loneliness, excluded from one of civilization’s oldest institutions. they ask for equal dignity in the eyes of the law. The Constitution grants them that right.

The judgement of the Court of Appeals for the Sixth Circuit is reversed.

It is so ordered.

If only all laws could were expressed in such beautiful language, principled, ennobled, perhaps the blunt instrument could be instead an artist’s or a masons or a sculptors tools, bringing order, bringing harmony, making something to be cherished from the rough stone of our needs and the raw clay of our desires.

In 1954 in the case of Brown v. Board of Education of Topeka, the justices of the Supreme Court ruled that racial segregation in public places was unconstitutional. However the greater part of the Civil Rights Movement, the battle to end segregation in schools and through much of American society, lay ahead. It was a struggle dependent on the grass roots action of people to force the executive and the legislative branches of government to act against local jurisdictions who violently refused to implement equal rights laws.

In Mississippi, in Alabama, in Texas and Louisiana, some local courts are delaying implementation of the law, some local clerks are refusing to issue marriage licences. Conservative Governors are complaining that the Supreme Court is not only infringing on States’ Rights, but also the religious freedom of people who disagree with the decision. How the religious freedom of a person who doesn’t believe in same-sex marriage is infringed by the marriage of someone who does, I can’t quite figure out. It’s kind of like not believing in Thor, and therefore feeling aggrieved by Norwegians, or Marvel fans.

Yes, there are still battles to be fought. The same old battles, in the same old places. To everyone else, congratulations.