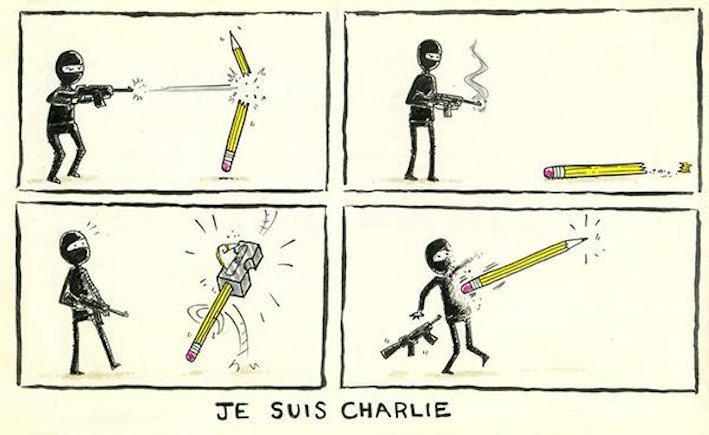 Charlie Hebdo – Fear Is the Enemy

Who is it that is scared? A recent study in the journal Current Biology has shown that one of the things that defines a conservative mind is a much stronger reaction to images that may inspire revulsion, disgust, fear.The study has confirmed previous research that demonstrates there are fundamental differences in the conservative and the liberal mind. So much so, that the intensity of brain reaction to a single image could be used to predict voting patterns, tolerance, xenophobia, attitudes toward gun control, war, abortion. An image as simple as a close-up of a cockroach, garbage, vomit, a bearded man with a gun, a bombed building, a ridiculous caricature of a revered figure, fires the brain in orange and red. Fear and disgust become primary motivators, invoking judgement, not reason, anger, not compassion.

At extremes this fear becomes the anger of a zealot. A terrorist wants to cause fear because fear is what they feel. A strict rule, an ideology, an identification with the mass, invokes a sense of order that is a balm to this fear. An offense to this order is experienced with an intensity felt like a threat. A zealot dominated by fear finds in the fight or flight response a seething, intractable compulsion.

This fear is continuously invoked, by the media, by politicians, by those who both create and promise us panaceas for our anxieties. Whether it is hard-wired in the brain, or conditioned through exposure becomes an important question. Can fear, can anger be unlearned, become compassion?
What is a satirical cartoonist? No matter how refined their art, or how vulgar their expression, they are like 12 year old boys; fearless, they mock everything, chortling amongst their compatriots at surreptitiously scrawled notes behind teacher’s back. Chide them gently and wait for them to grow up. If they don’t, laugh at their audacious silliness, and move on. Should a child, however they offend, be subject to extreme violence for juvenile laughter?
As to zealots, terrorist, perpetrators of such acts the world over in the name of faith, creed, patriotism, their fear makes them happy to kill, makes them find solace in death. Why fear them, why kill them, when that is what they want? When there are so many ways to teach them. Perhaps if we begin to understand such barbarities are committed not out of the fear they wish to inflict, but the fear they feel, born of an indignation as zealous as our own, we can all begin to take to heart a simple but difficult lesson; without fear, there is no enemy.

The rest speaks for itself.