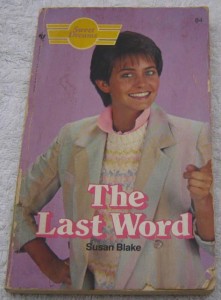 Over the last few years of selling teen romance books on ebay and on my website, Sweet Hearts Romance Books, I have spotted a few faces that sort of looked familiar. Some I have worked out who the now famous or almost famous person is, usually a woman who would have been a teen at the time of doing the shoots as a model. Some I found out about recently when researching for this article. And some I found on a wonderful blog that is mostly about books from the 1980s, with a focus on the teen romance genre. Peacherino at Cliquey Pizza 2 is a gem, her knowledge of 80s kids and teen books and other stuff is enormous. I highly recommend her blog.

Many of the teen romance series only featured girls on the covers, which has sort of puzzled me. Surely romance means there should be more than one person on the cover. Or were there just not enough teen boy models around at the time? Maybe they all wanted to be rock stars like Duran Duran or Bon Jovi. Who knows.

The first cover I realised had a famous person as the cover model is Sweet Dreams #84 The Last Word by Susan Blake. I kinda think she would have been better used on the cover of Sweet Dreams #97 Dancing In The Dark, given that she was ‘’discovered’’ as the girl who danced onstage with Bruce Springsteen in the video for his Dancing In The Dark song. The modelling for this cover would have been around the same time as the music video appearance. Courtney was also on the cover of Windswept A Mystery Romance The Secret Of The Dark by Barbara Steiner. I’ve never found a copy so the photo is from Cliquey Pizza 2 blog.

She started modelling at the age of 10. Many of the teen book cover models were quite young, with lots of makeup to make them appear old enough to be representative of the age of the romantic heroine. Jennifer was the model on the cover of Sweet Dreams #65 The Two Of Us by Janet Quin-Harkin, Caprice #4 Terri’s Dream by Margaret Garland and Caprice #40 Rock ‘n’ Roll Romance by Francess Lin Lantz and First Love From Silhouette #112 by Becky Stuart. Again, the best images I found of the last 2 on the web are from Cliquey Pizza.

From Baywatch as Caroline Holden and Lee Anne Demerest on the soap opera One Life To Live. Yasmine is on the cover of First Love From Silhouette #37 Love Note by Jessica Howell, First Love From Silhouette #45 A Touch Of Love by Winifred Madison, Caprice #33 Never Say No by Ann Boyle and Windswept’s The Disappearing Teacher by Conrad Nowell (this book was also released as a stand alone teen novel with a different cover photo that, to me, possibly has the same model)

Ally Sheedy is on the cover of Windswept: The Lost Holiday by Elizabeth Olsen.

Brooke is on the cover of a non-series teen romance novel, Helene by John Bowers, written in 1976.

Lori Loughlin was a popular actress in the 1980s and was in many now classic teen movies of the era. She was also on the covers of a few teen romance books. First Love From Silhouette #54 Picture Perfect by Carrie Enfield, Wildfire –A Funny Girl Like Me by Janey Donnell and a non-series novel Don’t Tell Me That You Love Me by Hila Colman.

Paula, ex wife of O.J. Simpson, was on the cover of Sweet Dreams #101 Wrong For Each Other by Debra Spector. Kind of an apt title, given O.J’s later history.

Meredith Salenger from The Journey Of The Natty Gan and Dream A Little Dream movies is on the cover of Sweet Dreams #4 Princess Amy by Melinda Pollowitz.

Susan played Lorna Forbes Perelli on the 1980s soap Loving, was on the cover of First Love From Silhouette #56 by Elaine Harper.

Kristian Alfonso was a figure skater, model, one of the actors who played Hope on Days Of Our Lives for a few years, an actor on Falcon Crest. She was on the cover of Wishing Star #9 I Don’t Want To Be Your Shadow by Deborah Aydt. Wishing Star started in the late 1970s and was one of the first popular series romance for teens.

Lisanne Falk from the Heathers movie is on the cover of Sweet Dreams #15 Thinking Of You by Jeanette Nobile.

Pamela Gidley played the robot in Cherry 2000 and was on the cover, albeit the back, of Sweet Dreams #79 Starstruck! ByShannon Blair (aka Marilyn Kaye). Some seller on sites like Abe, Alibris and Amazon wrongly state that Michael Jackson is on the cover of this book. As if MJ needed to do modelling. Insert the eye roll emoticon here. The book was about being dancers in a MJ music video.

Now for a few who are possible before they were famous faces on the covers. With some the dates for the books do match with the age the model would have been at the time, with others it could be a bit of a stretch. See what you think.

Reece Witherspoon is a definite possibility on the cover of Crosswinds Keepsake #1 The Right Kind Of Girl by Dorothy Francis. She would have been about 11 or 12 at the time and with makeup plastered on easily looks around 15 or 16. In the top photo I think the one with short hair is Reece. The second book is a younger childrens one and although the model has dark hair it could be Reece, she started modelling when she was 7 or 8 years old.

Thora Birch is a possibility on the cover of Sweet Dreams #63 Kiss Me, Creep by Marian Woodruff.

Sandra Bullock‘s name is sometimes used to sell Sweet Dreams #85 The Boy She Left Behind. The dates fit but I couldn’t find any reference online to Sandra ever doing any modelling.

Sometimes there was product placement on the covers of teen romance books, as in the models wearing well known labels. The model on Sweet Dreams #9 Cover Girl by Yvonne Greene (who also wrote the Kelly Blake Teen Model series) is wearing Jordache jeans, which were one of the jeans labels of the 80s. 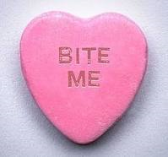 YA romance collectors can visit my website Sweethearts Romance Books and my new blog over at Sweehearts Blog.