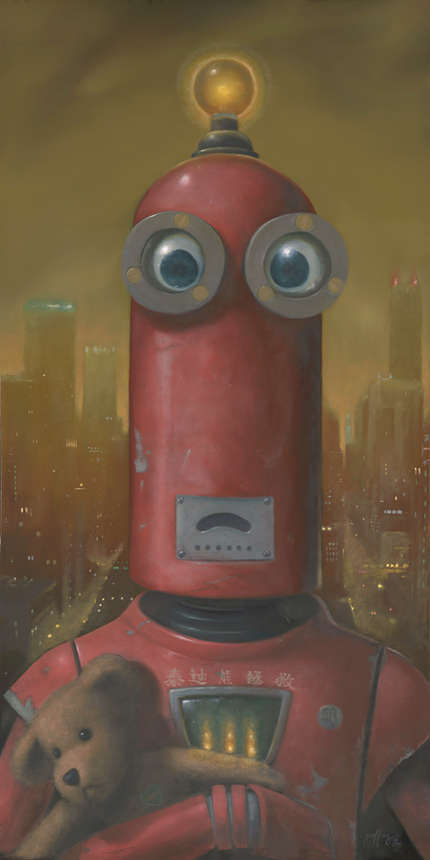 The Innocence of Sin City’s Robots

Geoffrey Gersten’s robots share a little with Pixar, but not much with Disney, they have a definite inheritance from the tin and plastic toy robots of the 50s and 60s, and also from the robots depicted in the cartoons of those eras.

These robots are friendly, quirky, cute, not the looming ominous menace of Gort, the loyal mechanical servitude of a Robby The Robot, the sinister implacable force of X-Men nemesis The Sentinels, or the armored angular excess of the giant Japanese Mecha.

Perhaps they have some inheritance from Class M-3 Model B9, General Utility Non-Theorizing Environmental Control Robot (that’s Robot from the classic Sci-Fi TV series Lost In Space, as if you didn’t know) who added occasional melancholy, mockery, humour, philosophizing, singing, guitar playing and quoting Shakespeare amongst his repertoire of human traits. He was also a great astro-navigator, had a vast database and knew what did and what did not compute. Pretty fancy for a mechanical meteorologist. Some robots are hes, some robots are shes and some robots are its. That’s more about personality and an anthropomorphized personality than external gender traits. B9 was definitely a person. Geoffrey Gertsen’s robots, despite their naive mechanicality, are also definitely persons.

They have a spiritual heritage in the robots of Osamu Tezuka’s Astro Boy. Tezuka’s robots are naive, simple, child-like, often put together from discarded scrap, they are only bad when they have been corrupted by the greed and selfishness of people. Geoffrey Gersten’s robots, even though many are depicted in a retro lolly-pop Las Vegas, Sin City itself, are innocents; like the toy and cartoon characters they resemble, they are also essentially children.

You can find more of Geoffrey Gersten’s whimsical robots and odd creatures at Morpheus Galleries.