Doctor Who is at the peak of its popularity, producers and fans alike of course want the show to continue, indefinitely. However, the mythology of the show states that a Time Lord can regenerate only 12 times. There has been discussion of what has been called an ‘unholy’ 13th regeneration as a way forward, and there is a precedent; the Doctor’s nemesis the Master has defied the laws of Time Lords and physics by regenerating beyond the mythological limit. Of course his obsession with his own immortality is part of what makes him mad.

Can the Doctor regenerate a 13th time, and not be a villain, not be mad? No, except perhaps in the upcoming 50th anniversary special event, with John Hurt as the Doctor who isn’t a Doctor, forced into terrible choices in the depths of the Time War, the Doctor can never be a villain. Even then let us say, flawed hero, making impossible choices. Of course there are many possible scenarios where it could be possible for the Doctor to regenerate a 13th time, for the story to continue, within the traditions of the canon. This is a fictional universe after all. Nevertheless, even in a fictional universe, certain adherence to the traditions must hold true. An illogical non-sequitur, an outlandish departure, a deus ex machina, on such a crucial element of the Doctor’s history, would sit something like garish crack in the fabric of the narrative universe.

However, imagine a scenario where by some twist of the timestreams Peter Capaldi’s 12th Doctor is a regeneration of a younger version of William Hartnell’s first Doctor. A closed loop, Alpha and Omega, the worm Ouroboros eating its own tale, a perfect twist on a Moebius strip.

The speculation and criticism of the plan to have the Doctor defy the Time Lord’s nature and the canon’s mythology would be immediately invalidated. Such a twist of course would require some stretching of the tradition, but it the leap, the suspension of disbelief required would be neither more nor less credulous, in the shows terms, than the other.

And of course it proves the old adage, which after all is what they are trying to achieve, that the show must go on, and on, and on.

A return to the beginning, a re-working of the original characters and stories would create the perfect story arc. Never ending, timeless and so perfectly appropriate for this the greatest tale of the race of time travelers. The narrative would continue, not indefinitely, but infinitely. That seems, in the context, magnificently appropriate.

Does this photo just released by the BBC of the 12th Doctor echoing the 1st Doctor hint at that? Perhaps.

Of course this is only speculation, only time will tell. 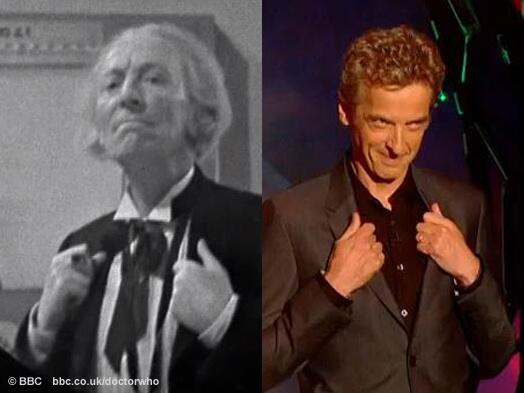