Enid Blyton was born 117 years ago today. One of the world’s most beloved, and most divisive, children’s authors, Enid’s works have been banned from more public libraries than those of any other author, yet more than 600 million copies of her books have been sold.

The controversy surrounding Enid’s books – which has resulted in heavy revisions in modern editions – is not simply a result of modern political correctness. The anti-Blyton campaign took hold as early as the 1930s. From the 1930s to the 1950s the BBC conspired to ban adapting Enid’s books for radio, considering her books to have no ‘literary value’. In the 1950s librarians and educationalists began questioning everything from her ‘limited’ vocabulary to the ‘suspect’ relationship between Noddy and Big Ears, to ‘racial discrimination’ – aimed at the presence of many Golliwogs in her stories. Some librarians complained she simply wrote too many books and that children were reading nothing else. Others, not to be outdone, were claiming one woman could not possibly write so many books and began spreading rumours that she used a team of ghost writers. 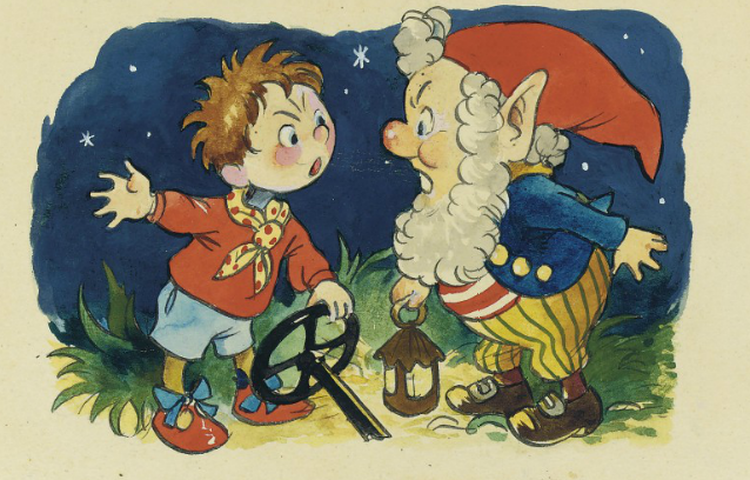 Enid did not take criticism well. She was also deeply hurt by the rumours that she didn’t write her books. In a somewhat unfortunate, yet endearingly awkward response to those who criticised her books Enid claimed that the attacks came “from stupid people who don’t know what they’re talking about because they’ve never read any of my books.”1

Yet hope still remained. A somewhat more subtle response was published in the Daily Mail in 1964:

One day Noddy came home quite tired out. He really had had a very busy day. He had gone all the way to Nottingham in his little car. And when he got there a nasty man called Librarian had kicked the poor little car very hard. He had also told Noddy he would never be allowed back there again because he was not grown up enough for all the boys and girls in Nottingham.
‘Oh I am so sorry, poor little car,’ said Noddy, stroking the steering wheel.
“Parp-parp,” said the little car, painfully.
‘Hallo, Noddy,’ called a voice over the fence. It was Tubby Bear.
‘What’s a vocabulary Noddy? That grumpy Librarian says you have got a very limited one. And he thinks you’re awful bad for the little boys and girls.’
Noddy was so worried that he hurried off to see Big Ears. He had never seen his old friend looking so cross.
‘We’d better face it,’ said Big Ears, sternly. ‘You and I and all the rest – and that goes for Mr. Plod, the policeman too – are like Librarian says, caricatures. And what is more, we are members of the intellectually under-privileged class.’
Noddy could not believe his ears.
‘B-b-beg pardon?’ he stammered. Big Ears sounded just like the fierce Librarian.
‘We’re redundant in Toyland,’ said Big Ears, angrily. ‘Do you really think children want our stories any more? We’ve got to do what the man says. All these little what-nots are going to be specialists by the time they’re nine. You’ve got to catch up on Thermo-dynamics and the Economic Position…Children want literature now. Literature with a capital “L”.’
Big Ears began to be quite worked up and so frightened Noddy that a little tear ran down his cheek. He rushed away and ran all the way home. As he went through the gate he fell right over the little car and BUMP!
With a big start Noddy woke up. It had all been a nasty dream, after all. And everything in Toyland was all right and always would be until Blyton knows when. And what is more, the kiddies went on loving Noddy and they didn’t give a parp-parp for Librarian and all those big words. 2

Fie to you, stern librarian. I’ll read what I like.