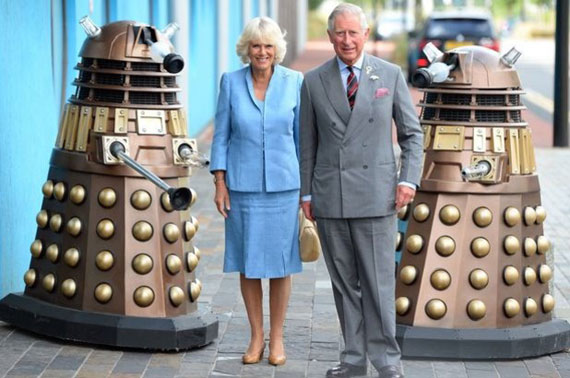 Royals Visit the Doctor Who Set : Charles and Camilla Meet the Daleks

The Prince of Wales and the Duchess of Cornwall stopped by the Cardiff studio where Doctor Who is filmed on their three day tour of Wales.

With much giggling, Prince Charles tried famous Dalek catchphrase “Exterminate” on the voice modulator, and Camilla had a go at flying the TARDIS. They also checked out a display of some of the show’s monsters, including Daleks, a weeping angel and a Cyberman.

The Prince of Wales first watched Doctor Who when he was fifteen years old, which awed current Doctor Matt Smith. Both Matt and Jenna-Louise Coleman were on set to greet the royal couple.