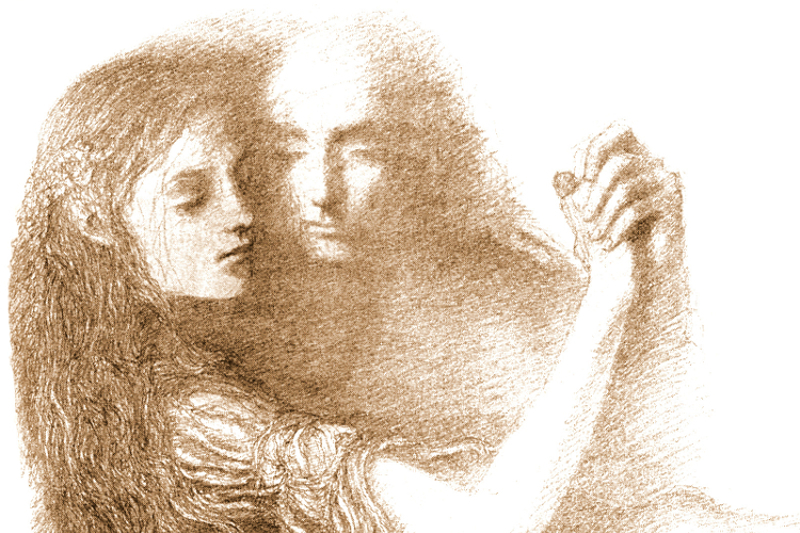 Tolkien scholar Wayne Hammond has just discovered two poems written by J.R.R. Tolkien in a 1936 school annual. One of the poems, The Shadow Man, is a much earlier version of The Shadow Bride, which was published in The Adventures of Tom Bombadil in 1962. In Middle-Earth it appeared in the Red Book of Westmarch.

Here are both versions of the haunting poem, The Shadow Man and The Shadow Bride.

There was a man who dwelt alone
beneath the moon in shadow.
He sat as long as lasting stone,
and yet he had no shadow.
The owls, they perched upon his head
beneath the moon of summer;
They wiped their beaks and thought him dead,
who sat there dumb all summer

There came a lady clad in grey
beneath the moon a-shining.
One moment did she stand and stay
her hair with flowers entwining.
He woke as had he sprung of stone.
beneath the moon in shadow,
And clasped her fast, both flesh and bone;
and they were clad in shadow.

And never more she walked in light,
or over moonlit mountain,
But dwelt within the hill, where night
is lit but with a fountain –
Save once a year when caverns yawn,
and hills are clad in shadow,
They dance together then till dawn
and cast a single shadow.

There was a man who dwelt alone,
as day and night went past
he sat as still as carven stone,
and yet no shadow cast.
The white owls perched upon his head
beneath the winter moon;
they wiped their beaks and thought him dead
under the stars of June.

There came a lady clad in grey
in the twilight shining:
one moment she would stand and stay,
her hair with flowers entwining.
He woke, as had he sprung of stone,
and broke the spell that bound him;
he clasped her fast, both flesh and bone,
and wrapped her shadow round him.

There never more she walks her ways
by sun or moon or star
she dwells below where neither days
nor any nights there are.
But once a year when caverns yawn
and hidden things awake,
They dance together then till dawn
and a single shadow make.