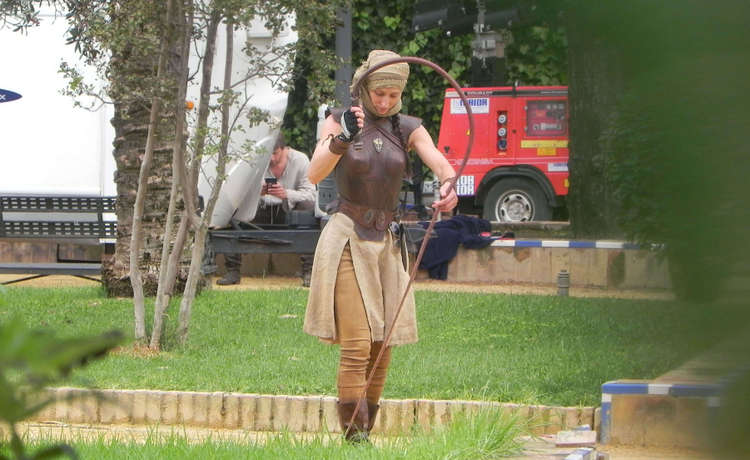 As it’s between seasons it has been a while since the Game of Thrones crew have annoyed me, but they’re at it again. So firstly they’ve taken three very distinctive characters, Nym, Tyene and Obara Sand – Oberyn Martell’s illegitimate daughters – and dressed them all in matching costumes. No I don’t get it either. Secondly they have added nipples to their leather breastplates. Now I know last season we saw the fireballs being thrown and clearly Dan and Dave are trapped in the 1980’s but that is no excuse for boob armour.

Vulture rather amusingly accused the Game of Thrones costume department of trolling George R.R. Martin. There is a legend that the saying ‘as useless as nipples on a breastplate’ introduced in A Clash of Kings was George’s literary revenge against Joel Schumacher for the Bat-nipples. While a search for ‘nipples’ in your Song of Ice and Fire eBooks brings up rather more incidents than the use of this phrase, it appears it is a favourite saying of the Lannisters.

Dolorous Edd opined that glass knives were about as useful as nipples on a knight’s breastplate – Jon, A Clash of Kings

She blamed Pycelle; he should have told the silent sisters that Lord Tywin Lannister never smiled. The man is as useless as nipples on a breastplate – Cersei, A Feast for Crows

A shield on his right arm would prove about as useful as nipples on his breastplate – Jaime, A Feast for Crows

I should have let the crone have him. He’s going to be as useful as nipples on a breastplate.” Tyrion, A Dance with Dragons

These Kingsguard knights are as useless as nipples on a breastplate” Cersei, A Dance with Dragons

Why @GRRMspeaking is not going to be happy with the @GameofThrones costume department: http://t.co/0SS8ZzYO3R pic.twitter.com/C0EPLKBTsY