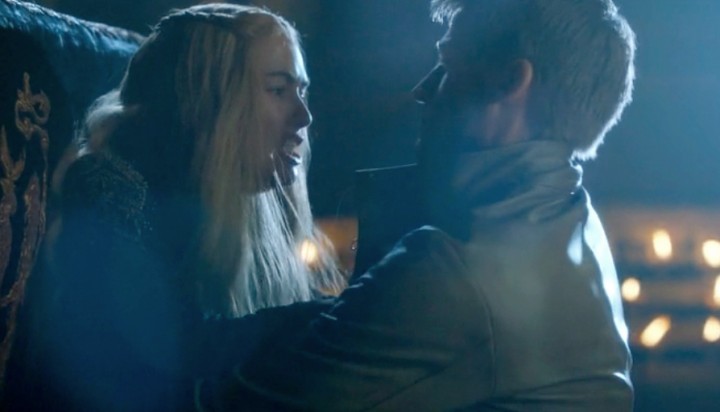 Cersei and Jaime in Breaker of Chains

Spoiler warning! This contains spoilers for Game of Thrones: Breaker of Chains

If HBO isn’t going to fire Alex Graves someone should at least gag the man. Last week he called Brienne of Tarth a “lesbian”. This week director Alex Graves is claiming a rape scene was a “turn-on” for both of the characters.

This week’s Game of Thrones episode, Breaker of Chains, saw a disturbing scene between Jaime and Cersei Lannister which left fans outraged. In front of their son’s corpse, in the sept, Jaime rapes Cersei. Graves is now claiming the rape scene was consensual, and a “turn-on” for the characters.

Graves told Hitfix “Well, it becomes consensual by the end, because anything for them ultimately results in a turn-on, especially a power struggle. Nobody really wanted to talk about what was going on between the two characters, so we had a rehearsal that was a blocking rehearsal. And it was very much about the earlier part with Charles (Dance) and the gentle verbal kidnapping of Cersei’s last living son. Nikolaj came in and we just went through one physical progression and digression of what they went through, but also how to do it with only one hand, because it was Nikolaj. By the time you do that and you walk through it, the actors feel comfortable going home to think about it. The only other thing I did was that ordinarily, you rehearse the night before, and I wanted to rehearse that scene four days before, so that we could think about everything. And it worked out really well. That’s one of my favorite scenes I’ve ever done.”

This guy just gets better and better. First Brienne is a lesbian and now he enjoys filming “sexy” rape scenes. Funnily enough HBO’s synopsis of the episode goes like this

“Jaime tries to comfort his sister, taking her into his arms and kissing her, but she recoils at the touch of his golden hand. Incensed, Jaime pulls her down on the floor and forces himself on her.”

Cersei was saying no, hitting him and continuing to say “no it’s not right!”, crying, while Jaime forced himself inside her. Jaime kept muttering “I don’t care.” This is clearly not consensual sex. Nikolaj Coster-Waldau seems a bit divided on the matter. In the first part of his interview with The Daily Beast he said:

“It is fucked up. It doesn’t get any darker than that, does it?”

“To understand the psychology behind it, and why he goes as far as he does, was really difficult,” Nikolaj  said “To me it became, When does physical desire take over? It’s one of those things where he’s been holding it back for so long, and then out of anger he grabs her, and instinct takes over, and he lets loose. He says, I don’t care. He wants to not care. He has to connect to her, and he knows this is the most fucked up way for it to happen, but in that moment, he knows it’s all he can do. It’s an act of powerlessness.”

He sounds like he thinks it is a rape scene, but then adds:

“It was tough to shoot, as well. There is significance in that scene, and it comes straight from the books—it’s George R.R. Martin’s mind at play. It took me awhile to wrap my head around it, because I think that, for some people, it’s just going to look like rape. The intention is that it’s not just that; it’s about two people who’ve had this connection for so many years, and much of it is physical, and much of it has had to be kept secret, and this is almost the last thing left now. It’s him trying to force her back and make him whole again because of his stupid hand.”

(My emphasis). George R.R. Martin wrote no such thing. Here’s how it really happened.

“There was no tenderness in the kiss he returned to her, only hunger. Her mouth opened for his tongue. “No,” she said weakly when his lips moved down her neck, “not here. The septons . . .”
“The Others can take the septons.” He kissed her again, kissed her silent, kissed her until she moaned. Then he knocked the candles aside and lifted her up onto the Mother’s altar, pushing up her skirts and the silken shift beneath. She pounded on his chest with feeble fists, murmuring about the risk, the danger, about their father, about the septons, about the wrath of gods. He never heard her. He undid his breeches and climbed up and pushed her bare white legs apart…“Hurry,” she was whispering now, “quickly, quickly, now, do it now, do me now. Jaime Jaime Jaime.” Her hands helped guide him. “Yes,” Cersei said as he thrust, “my brother, sweet brother, yes, like that, yes, I have you, you’re home now, you’re home now, you’re home.” Jaime A Storm of Swords p1106

Clearly this is consensual sex. Cersei is reluctant only because of the danger of being discovered, and she soon consents verbally. This is also clearly yet another attempt to take the edge off Cersei’s behaviour. In A Song of Ice and Fire-reality she has sex with her brother on sanctified ground in front of her son’s corpse. In Game of Thrones-land Cersei is absolved of yet another abhorrent act, making her the victim of partner rape and Jaime a sexual predator.

There are murmurs that we shouldn’t be canonising Jaime. That has nought to do with it. That Jaime is one of the few characters on Game of Thrones who actually attempts to change is why he grows more popular with fans. It is not that George’s other characters are less complex, but Jaime has quite a different journey to take. The severing of the Lannister twins has nothing to do with violence or rape, and everything to do with a decision Jaime makes.

Rape is not in Jaime’s character. He succeeds in protecting Brienne from being raped while they are travelling together, sticking his own neck out to save her. He also succeeds with a character who may or may not be introduced in the television series, a servant girl named Pia.

The following contains spoilers for book four, A Feast for Crows

Pia, also known as Pretty Pia, is a servant at Harrenhal, who works in the buttery. Pia is a promiscuous girl, and tries to seduce Jaime when he is passing through. When Jaime returns to Harrenhal, he remembers her, even though her face has been ruined; for speaking when Gregor Clegane wanted silence, the Mounatin smashed her face in with a mailed fist, breaking her nose and knocking most of her teeth out.

“The girl fell at Jaime’s feet when she saw him, sobbing and clinging to his leg with hysterical strength till Strongboar pulled her off. “No one will hurt you now,” he told her, but that only made her sob the louder.” Jaime A Feast for Crows p801

Jaime takes her on as a washerwoman for his camp, and protects her from further abuse.

“One of the Mountain’s men had tried to rape the girl at Harrenhal, and had seemed honestly perplexed when Jaime commanded Ilyn Payne to take his head off. “I had her before, a hunnerd times,” he kept saying as they forced him to his knees. “A hunnerd times, m’lord. We all had her.” When Ser Ilyn presented Pia with his head, she had smiled through her ruined teeth.” Jaime A Feast for Crows p883

I’ve never been a big fan of Jaime Lannister. But that is one of my favourite moments from A Song of Ice and Fire. A little justice for an unimportant girl in a cruel and unjust world. I doubt we will get to see it in the television series. For all the work they have done with setting Jaime on his path to redemption in A Game of Thrones, this incident has destroyed all of it. Jaime Lannister is not a good man. But he is not a rapist.

Maybe there is something different at the heart of the matter.  Maybe this is just another example of rape being used as a plot-device, and the sanitisation of Cersei Lannister.

Read George R.R. Martin’s response to the rape scene in Breaker of Chains.