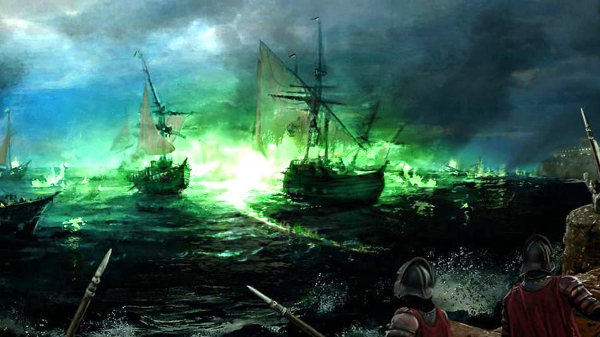 The Battle of Blackwater - Game of Thrones

A Clash of Queens: The White Queen vs Game of Thrones

It’s a genre clash bigger than Bosworth. With months and months to go before the next season Game of Thrones hits our screens, fans are going over the BBC’s ten-part adaptation of The Cousins War series by Philippa Gregory, The White Queen. It might be easy to assume that because it is set in medieval England during the Wars of the Roses, Game of Thrones fans will like it. However a few episodes in many fans are finding that they’re not, and it’s hardly surprising. Some Game of Thrones fans are medieval history buffs who have read the books, some are just fans of the fantasy genre who have read the books, some have only watched the TV series and are going off the media hype that The White Queen will fill the void. Or you could be a combination of all of the above. So why the negative reaction?

George R.R. Martin never called the Wars of the Roses the “original Game of Thrones”, that phrase was used on the cover of the recently-reprinted Accursed King series by Maurice Druon, one of George’s favourite authors. The media have taken the quote and keep parroting it in regards to The White Queen, or anything to do with the Wars of the Roses. Of course “Game of Thrones” is an excellent keyword to link-bait with. George has stated he draws most of his inspiration from English and French medieval history and that  “The Wars of the Roses, the Crusades, and the Hundred Years War have been my biggest influences.” A Song of Ice and Fire is a high-fantasy series, it is set in an imagined world with imagined characters. It is entirely the author’s creation, regardless of periods of history that may have influenced him, and above all, it has magic.

The “magic” in The White Queen is rather different. There were no giants and Whitewalkers in medieval England, the magic is based on the folk magic traditions that people actually believed in at the time. The White Queen is not a fantasy book, there is little element of any fantasy in it, save the casting of a few spells. The is designed to fit neatly with actual historical events at the time, because the books are based on actual historical figures. So why use magic in a historical fiction book? Both Elizabeth Woodville and Jacquetta Rivers were accused of witchcraft by their enemies. Women were not executed for treason prior to the Henrician Tudor reign, witchcraft and heresy were about the only charges that involved an actual death sentence. When Philippa Gregory discovered Jacquetta’s mythical descent from Mélusine, she ran with it. If you’ve read any of her earlier books you’ll know she is fascinated with medieval alchemy and sorcery, and here was the perfect opportunity to use it to her heart’s content.

The magic used in The White Queen would be coined “hedge magic” in the fantasy genre, considered less powerful than sorcery and based on superstitious ritual and folklore. Magic and the occult were taken quite seriously during the medieval period, but of course most people feared it. Even the village midwife was constantly under the threat of being suspected of witchcraft. Any actual “magic” practiced was based on either folklore or alchemy, which was introduced into England in the 11th century. Alchemy is portrayed in the third book in The Cousins War series, Jacquetta’s story,  The Lady of the Rivers. Of course A Song of Ice and Fire has a Guild of Alchemists. But again there is a difference. Sorcery was technically illegal in medieval England and alchemy was certainly not used in battle.

The other major difference between the two series is the characters. A Song of Ice and Fire has a huge cast of main characters, The Cousins War is told from a single character’s viewpoint. And that character is always a woman. The men remain firmly in the background, with the exception of Richard III, because Philippa swings the Ricardian way. But even he is seen through the eyes of the women. They are all mothers, and one of their primary concerns is of course their children, their husbands, and their position in society. Not that there are any shrinking violets in The Cousins War, these are powerful and ambitious women.

Which brings us to where the show suffers. The adaptation of The White Queen is an amalgamation of it’s namesake, The Red Queen and The Kingmakers Daughter. It covers a twenty-year period in just ten episodes. The script was, in a word, dreadful. The changes in the script had a negative effect, losing much of the excellent cross-overs of perspective Gregory employed in the book. It smacks of sexism, where the books certainly did not, with the producers preferring weeping and hysterical women, or cartoonish villains. Admittedly the acting was as good as it could get with that sort of script, but the second-rate costumes and lack of attention to detail detracted from the performances.

The ten episodes cost £25 million to shoot, or a US $39 million, in comparison to the $60 million plus HBO allocated to season one A Game of Thrones. Then again, I would imagine £25 million is enough to be getting on with. While the Game of Thrones producers deviate from the books, the script-writing can’t really be faulted, the cast is fantastic and the cinematography is excellent. But all in all the reason for the unexpected success of an adaptation that would normally only appeal to the fantasy geek, is that most people who thought they might have been tuning into a “regular” historical drama probably found that unlike anything they’ve seen on commercial television. At least lately. The White Queen with its lacklustre script and boorish stereotypes has been reduced to just another costume drama.

Originally published at History Behind Game of Thrones.