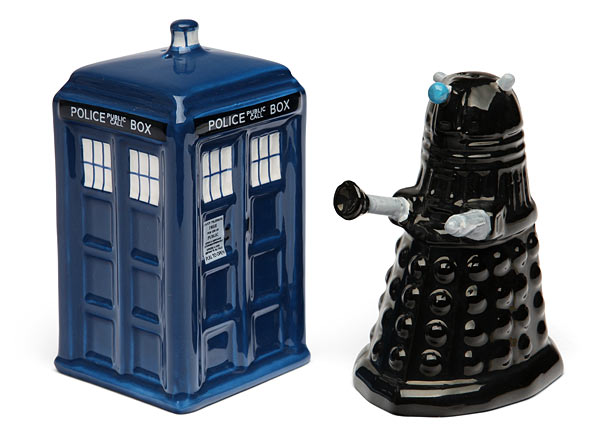 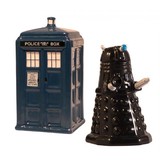 The Daleks’ implacable will to exterminate all other races, their assumption of genetically created racial superiority was undoubtedly based on the Nazis, inspired by creator Terry Nation’s childhood experiences in WWII, growing up in Cardiff, Wales, a city that was heavily bombed by the Nazis, combined with the prevalent fear of atomic Armageddon which was perhaps at its peak in the early 60s, following the Cuban Missile Crisis and the successful testing of the Neutron Bomb. The Daleks, are, afterall, not robots, but heavily mutated humanoids who retreated inside their mechanical armour to protect themselves from the deadly neutron radiation of the war they created.

It may seem a little unusual to employ the image of a monstrously evil race of killers as a condiment dispenser, after all, most

of us would balk at the thought of having Hitler  & Goering Salt & Pepper Cruets.

While it may simply be that their shape, almost from when they were first invented in 1963, garnered them the nickname ‘Pepperpots’,  it could also be that, while inspiring fear in small children, the Daleks have also inspired a certain empathy.

Afterall, who else, other than a small child, has an unrelenting screeching voice, and a will that will brook no opposition? Perhaps they appeal to the brat within us all.