EVEREST – Behind The Scenes

Because it’s there. We all know the easy reason why people climb mountains. A challenge not only to physical endurance, skill and determination, but also a challenge to the human spirit. The mountain is not only a daunting physical barrier, it is a symbol, as is its ascent. Nietzsche declared, “He who climbs the highest mountains laughs at all tragedies, real or imagined.” By overcoming the mountain, one overcomes oneself. Leni Riefenstahl went from The Holy Mountain, The Storm Over Montblanc, The White Hell of Pitz Palu, and other heights to The Triumph Of The Will. Ayn Rand said, “I stand here on the summit of the mountain. I lift my head and I spread my arms. This, my body and spirit, this is the end of the quest. I wished to know the meaning of all things. I am the meaning.” Nietzsche and Riefenstahl climbed mountains, and perhaps, from up there, gained some perspective. Rand only ever took the elevator.

Andrew Waugh, a surveyor with the Royal Geographical Society had named it Everest in 1856, reporting, “But here is a mountain, most probably the highest in the world, without any local name that we can discover, or whose native appellation, if it have any, will not very likely be ascertained before we are allowed to penetrate into Nepal and to approach close to this stupendous snowy mass. In the mean time the privilege, as well as the duty, devolves on me to assign to this lofty pinnacle of our globe, a name whereby it may be known among geographers and become a household word among civilized nations.
In virtue of this privilege, in testimony of my affectionate respect for a revered chief, in conformity with what I believe to be the wish of all the Members of the scientific department, over which I have the honour to preside, and to perpetuate the memory of that illustrious master of accurate geographical research, I have determined to name this noble peak of the Himalayas ‘Mont Everest.'”

Waugh was quite wrong, the People of Tibet, Nepal, China and India had many names for it, Chomolangma, Sagarmatha, Shèngmǔ Fēng, meaning “Goddess Mother of Snows” and “Mother of the Universe” and “Holy Mother Peak”.

In 1996 two separate expeditions attempted Everest. They encountered the most extreme blizzard ever recorded on the mountain, adventure turned to tragedy. Perhaps they failed to understand, as the people of the mountain and the old philosophers knew, that the mountain is not a holiday, an adventure, but the mother of storms, an uncompromising confrontation with implacable nature and the limits of the self.

Director Kormákur, knew both action and the elements, working on edgy crime thrillers in his native Iceland, moving on to Hollywood action for Everest’s producers Working Title in the action thriller Contraband. Shortlisted for an Academy Award for 2012’s The Deep, the story of a lone survivor of a capsized fishing boat off Iceland’s frigid and deadly seas.

Speaking of his approach to the film he saw it as a cautionary tale and one of achievement, “Landscape and weather is at least the half of me. In Iceland, nature is never far away. Volcanoes erupting and avalanches taking out villages on a regular basis remind you of Mother Nature’s might…I wanted to make it in the most authentic way possible.  To take people on a journey up Everest and show them the mountain in a way that hasn’t been possible until now…and at the same time create intimacy between the characters that is all too rare in big studio films. Everest is a metaphor for any kind of ambition, and anyone who has ambition needs to balance that with his or her family life. There’s the mountain and there’s home, and the distance between the two is immense, pulling in two opposite directions.”

Shot in the foothills of The Mother Of Mountains itself, the film also uses the latest in special effects and camera technology to bring the experience and the events of that day high on the mountain to a fierce and spectacular realization.

Everest opens in cinemas in 2D, 3D and Imax 3D on September 17th, in an experience so edge of the seat, so authentic you may need to rope yourself to the person next to you, and pray the crampons hold, or at least wear a Parka. Watch the featurette on the heart-breaking and spectacular Everest below. 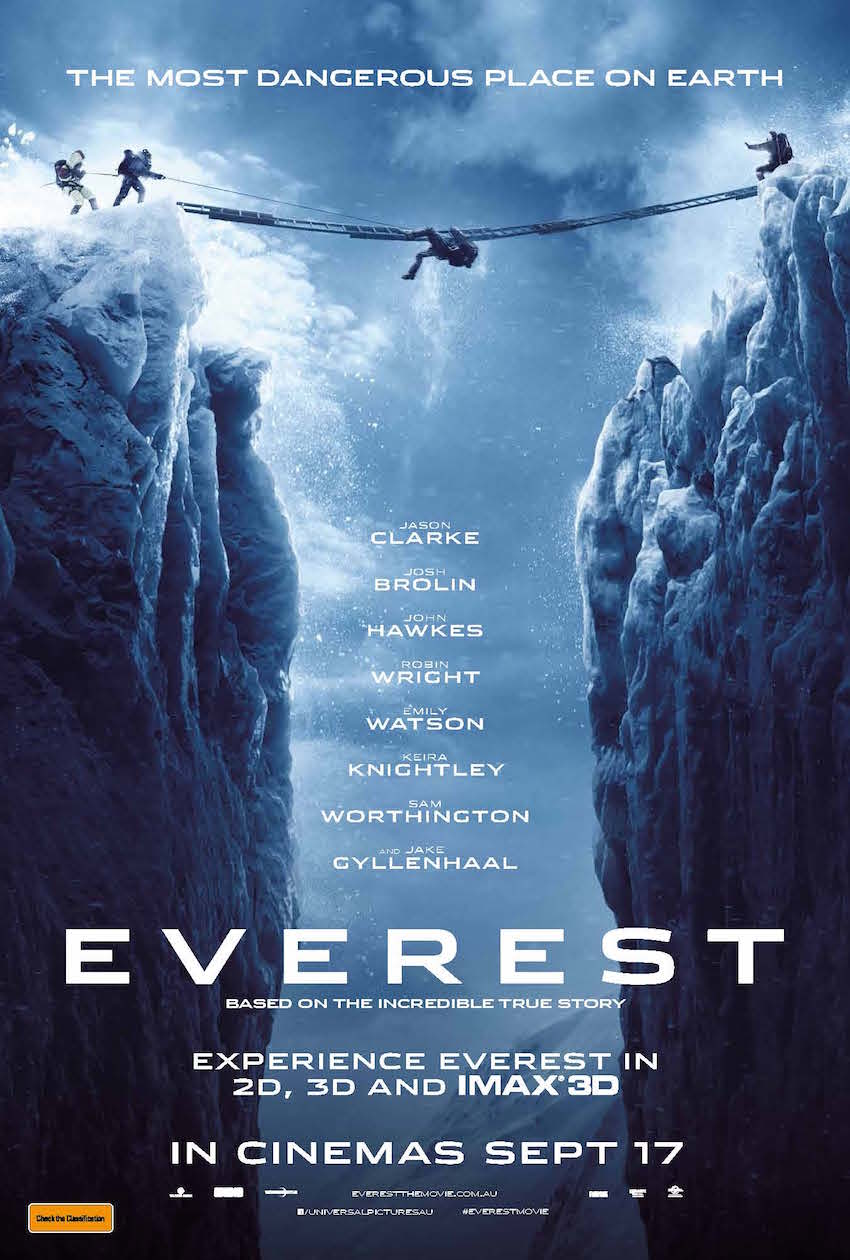