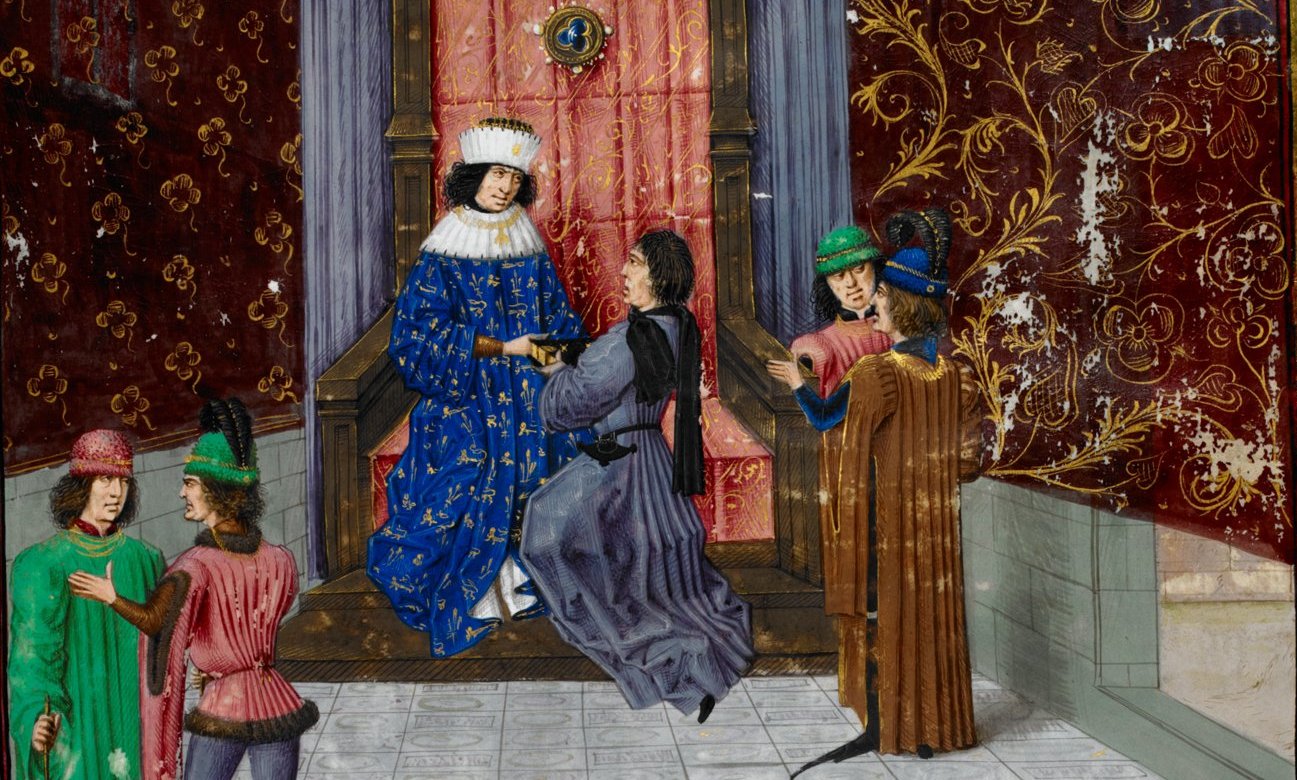 The British Library houses the surviving manuscripts acquired by King Edward IV that formed the basis for the Royal Library. Part of Edward’s collection includes Jean de Wavrin’s Anciennes et nouvelles chroniques d’Angleterre Volume I.  Wavrin compiled a seven volume chronicle detailing England’s history from its beginnings until 1471 in the last 25 years of his life, the Recueil des croniques et anchiennes istories de la Grant Bretaigne  – Account of the chronicles and old histories of Great Britain. Anciennes et nouvelles chroniques d’Angleterre was commissioned for Edward IV, and was completed after Wavrin’s death. The manuscript was created in Bruges and illuminated by the Master of the London Wavrin. This volume is the third edition which was intended to continue the narrative to Edward IV’s return to the throne in 1471.

This miniature depicts Edward IV receiving the book from Jean Wavrin. However the prologue has an interesting reference. 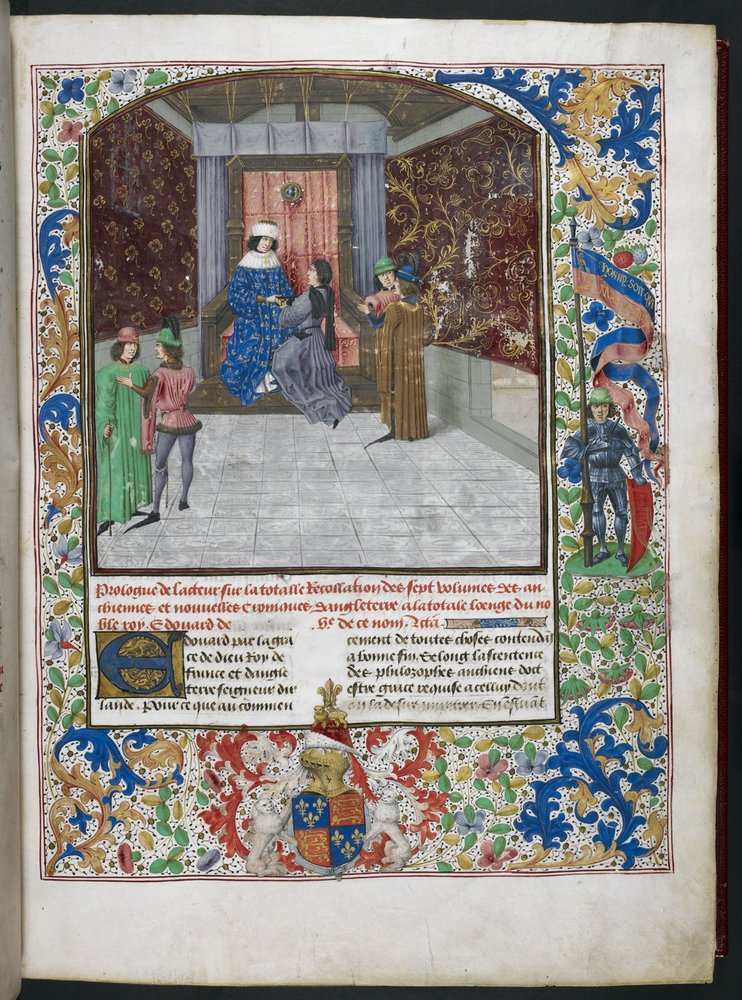 The British library thinks the reference to Edward V is merely an error, however as Margaret Kekewich points out Edward V is referenced twice in the prologue. And as we can see there is a long gap between “Edouard de” and “5th”. 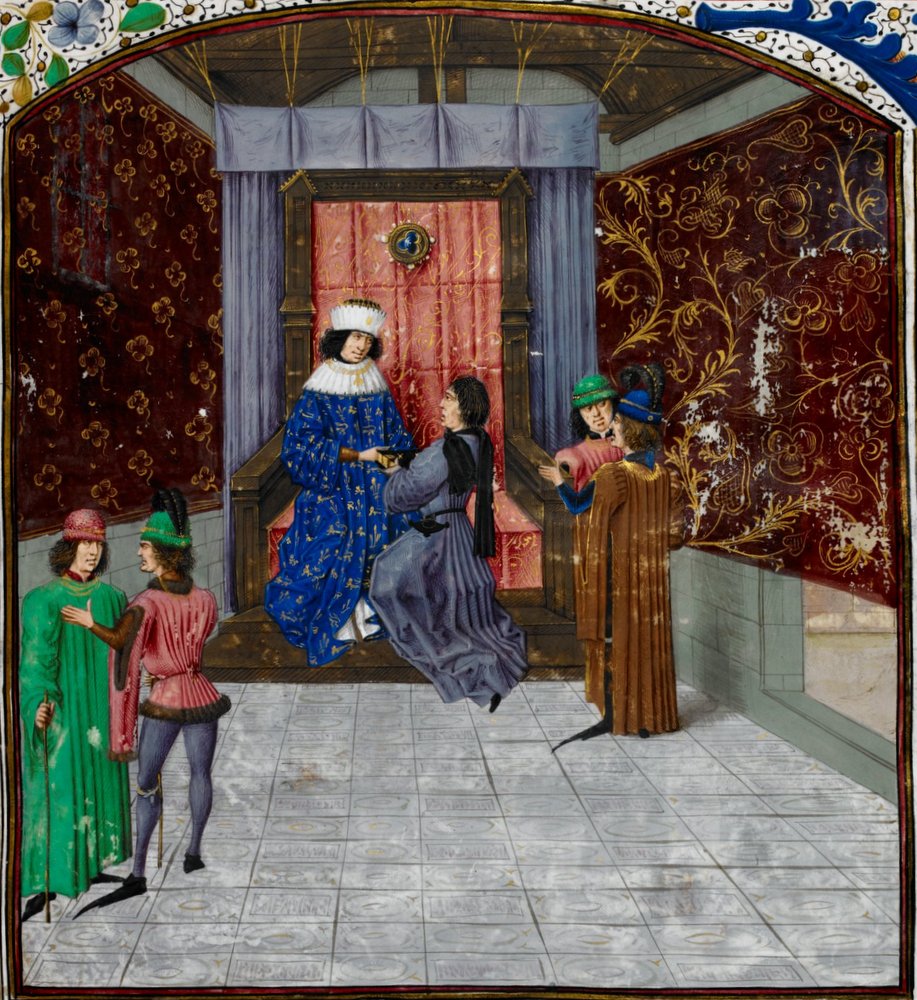 The British Library dates it after 1471, before 1483. The miniature depicts Edward IV wearing the Order of the Golden Fleece he received in 1468. The figure wearing the Order of the Garter may represent Richard Duke of Gloucester. The manuscript was clearly intended to be presented to Edward IV. The British Library states that the prologue, its illumination and the table of contents were added to the volume after the rest of the manuscript had been completed. In light of the suspicious gap visible in the prologue it may be that the manuscript was not completed until after Edward’s death, and it may just be possible that it was completed in the brief reign of his son Edward V. Its whereabouts between it’s completion and being included in the list of books at Richmond Palace of 1535 are unknown.