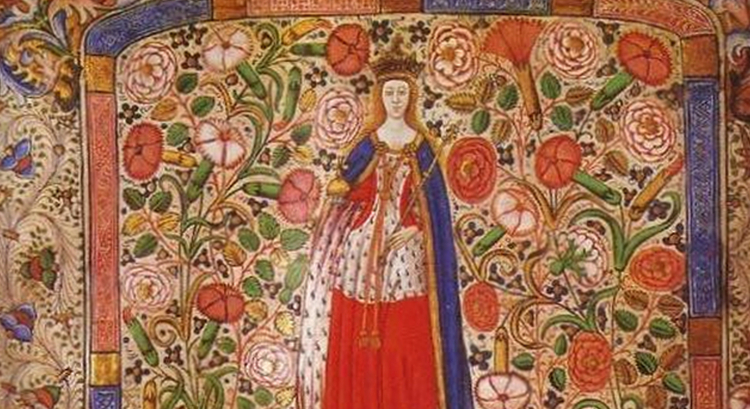 Elizabeth had nothing to recommend except her obvious physical attractions. Her rather cold beauty was not offset by any warmth or generosity of temperament.

The period between 1483 and her death on 1492 must have encompassed the bleakest moments in Elizabeth Wydeville’s life, yet empathy has given way to controversy. Slanderous accusations of poisoning her own husband, of placing her daughters in King Richard III’s care to sate her ambition and heavy-handed judgements against her for sending her youngest son to join his brother in the Tower of London are not enough to satisfy Elizabeth’s detractors. After doing everything she could to ensure her daughters’ survival she is accused of trying to destroy her eldest Elizabeth of York’s family in a failed plot that saw her banished from court. Was Elizabeth Wydeville truly so ruthless, ambitious and self-destructive?

I think in the general negative assessments of Elizabeth Wydeville and Richard III’s charges of witchcraft and bigamy, we lose sight of what she endured after her husband Edward IV’s death. How difficult was Elizabeth’s position?

-Unexpected death of her husband, Edward IV, at age 40.
-Disappearance of her two sons, Edward V and Richard, Duke of York, into the Tower of London, never to be seen again.
-Execution of her son, Sir Richard Grey, by Richard III.
-Execution of her brother, Anthony Wydeville, Earl Rivers, by Richard III.
-Pronouncement in a sermon at St. Paul’s that her 19-year marriage to Edward IV was adulterous and her children “Bastards,” a proclamation that Parliament made the law of the land in January 1484.
-Sequestration of Edward IV’s personal property, which his Will had conferred on Elizabeth. She and their five daughters were thus rendered paupers.

Elizabeth was left with nothing: no money, no power, no means of survival. Unusual courage, intelligence, and fortitude enabled her to seek Sanctuary, arrange the marriage of Elizabeth of York to Henry, Earl of Richmond, and negotiate with Richard III regarding the well-being of her daughters.

Despite her earlier resistance Elizabeth eventually had to come to terms with Richard III. Amazingly this is often attributed to alleged greed and ambition, was it not in fact a case of her looking to her daughters’ safety and well-being?

Queen Dowager Elizabeth had no choice but to negotiate with Richard III. The Sanctuary at Westminster Abbey was surrounded by Richard III’s troops, and the Abbot was increasingly threatened for protecting Elizabeth and her five daughters. After 11 months in Sanctuary and the failure of Buckingham’s rebellion, Elizabeth clearly saw that her daughters had no future unless their situation changed.

Richard III’s public oath explicitly denied Elizabeth the title “Queen of England” and referred to her as “dame Elizabeth Grey.” How, then, can she be accused of ambition? Richard also promised, however, to protect her daughters, marry them to “gentlemen born,” and give each a dowry of 200 marks annually for life. “Dame Elizabeth Grey” also received an annual stipend of 700 marks. The terms of Richard III’s oath provide the best evidence of Elizabeth’s intent to provide for her daughters at the cost of her own eminence.

Elizabeth seems to disappear between leaving sanctuary and Richard III’s defeat at the Battle of Bosworth. Despite her earlier plot with Margaret Beaufort can we say it is likely she didn’t have a hand in politics during those two years?

We know only that Elizabeth was under the custody of John Nesfield, one of Richard III’s esquires, after leaving Sanctuary. Nesfield would have kept her under close guard, but we do not know if she managed to communicate with her supporters during that time.

Do you think Elizabeth, after seeing her daughters safely settled and her eldest Elizabeth become Henry Tudor’s Queen Consort, may have been content to now step out of public life?

Contemporary evidence indicates that Elizabeth was planning to retreat from public life within ten months of Henry VII’s victory at Bosworth. On July 10, 1486, she signed a 40-year lease with the Abbot of Westminster for Cheneygate mansion within Westminster Close. Presumably, she planned to live at Westminster Abbey, which had sheltered her during two Sanctuaries, rather than stay with the Court. At this point in her life, she was especially esteemed by Henry VII, who designated her godmother to his first-born son, Arthur, on September 20, 1486. The lease indicates that Elizabeth was seeking a religious retreat away from the swirling, murderous world of politics that had characterized her years as Queen.

What is your opinion on her alleged involvement in the Lambert Simnel rebellion?

Elizabeth played no role in the Lambert Simnel rebellion. Why would she? Her daughter was Queen of England. The Simnel rebellion aimed to replace her daughter and Henry VII with the earl of Warwick, son of Clarence, whose 1469 rebellion against Edward IV had contributed to the murders of the Queen Dowager’s father, Lord Rivers, and her brother, Sir John Wydeville.
Also complicit in the Simnel rebellion was Bishop Robert Stillington, the very man who had declared Elizabeth’s marriage to Edward IV to be adulterous and her children illegitimate. It is inconceivable to think that Elizabeth would support such enemies in their efforts to replace her daughter as Queen of England.
No contemporary evidence connects Queen Dowager Elizabeth to the Simnel plot.

Do you think Elizabeth was really forced to retire to Bermondsey Abbey by Henry VII or was it more likely a case of Elizabeth wanting to retire quietly?

The July 1486 lease with Westminster Abbey indicates that Elizabeth’s retreat into religious seclusion was her choice. Her move to the secluded rural monastery at Bermondsey, rather than to Westminster, may have reflected a desire to live farther away from the politics of the court at Westminster Palace. Bermondsey Abbey would have welcomed Elizabeth to its royal apartments as the widow of its founder’s descendant. It should be noted that during Elizabeth’s residence at Bermondsey Abbey, her annuity was increased and supplemented by occasional gifts from the king: £6 for a “ton of wine” in 1488 and 50 marks for the feast of Christmas 1490—small tokens that indicated Henry VII was not punishing her.

A contemplative, religious life in a secluded convent was quite consistent with the piety Elizabeth had exhibited as Queen. Throughout her political years, Elizabeth had contributed generously to the Carthusian charterhouse and the Bridgettine Abbey of Syon near her palace at Sheen. She named her youngest daughter after the Swedish nun St. Bridget. She obtained a special license to worship with the solitary, ascetic Carthusian monks at their monasteries. She also obtained a papal indulgence for the general populace in which the Pope cites her “singular devotion for the feast of the Visitation [of] St Mary the virgin to St Elizabeth.”

Elizabeth saved religious institutions that had been founded by Henry VI, but dismantled during Edward IV’s early regal years. Queens’ College, Cambridge (established by Margaret of Anjou) credits Elizabeth as its “co-founder” for her contributions and “completion of this college.” One Cambridge historian credits Elizabeth’s “piety and natural reason” for making her “specially solicitous…[for] the safety of souls and the public good.” Similarly, Eton College, whose endowments were revoked by Edward IV in 1461 and charter abolished by the Pope in 1463, had its lands restored in 1467. Provost Henry Bost credits “the abundant generosity of the wife of the anointed Edward IV” for the subsequent wealth showered on his college.

The piety displayed during Elizabeth’s years as queen makes her retirement into religious seclusion (a preference shared with other noble women such as Cecily Neville and Margaret Beaufort) quite understandable.

Elizabeth was not actually excluded from court life after she retired to Bermondsey Abbey was she?

Elizabeth rejoined the court for her daughter’s second confinement and the birth of her granddaughter, Margaret, in November 1489. Amazingly, the Queen Dowager’s presence during her daughter’s confinement caused critics to accuse her of being a social-climbing opportunist who wished to display her relationship to her cousin François de Luxembourg, who was visiting England with several French ambassadors.

What do you think her final years were like for her, considering everything she had been through?

At Bermondsey Abbey, Elizabeth Wydeville finally found peace in her contemplative, prayerful devotion to her God. Her Will recognizes a “world so transitory” in bequeathing her soul into God’s hands. She had “no worldly goods” and only “small stuff and goods” to disperse, but her lifetime of caring for husband, children, and family had exceeded what anyone could expect.

Win a copy of Elizabeth Wydeville: The Slandered Queen!

We have an eBook to give away courtesy of The History Press. To win a copy of Elizabeth Wydeville: The Slandered Queen by Arlene Okerlund just leave a comment below by Sunday the 5th of October. 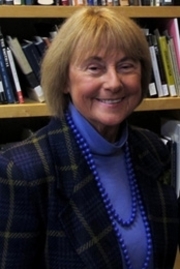 Arlene Okerlund has written Elizabeth Wydeville: The Slandered Queen, published by The History Press, and Elizabeth of York published by Palgrave Macmillan.

Arlene Okerlund, Professor Emerita of English, retired after a career of teaching Renaissance literature at San José State University in California. After several years in the classroom, she served six years as Dean, College of Humanities and the Arts, and seven years as Academic Vice President before returning to her first loves of teaching and research. The author of scholarly articles on Shakespeare, Spenser, Marlowe, Donne, and Dryden, Professor Okerlund also writes for popular audiences, including the newsletter of the Peninsula Banjo Band with which she plays tenor banjo.
Currently, she teaches at the Osher Lifelong Learning Institute at Santa Clara University and lectures at The Institute for the Study of Western Civilization in California.

Elizabeth Wydeville, Queen consort to Edward IV, has traditionally been portrayed as a scheming opportunist. But was she a cunning vixen or a tragic wife and mother? As this extraordinary biography shows, the first queen to bear the name Elizabeth lived a tragedy, love, and loss that no other queen has since endured. This shocking revelation about the survival of one woman through vilification and adversity shows Elizabeth as a beautiful and adored wife, distraught mother of the two lost Princes in the Tower, and an innocent queen slandered by politicians.