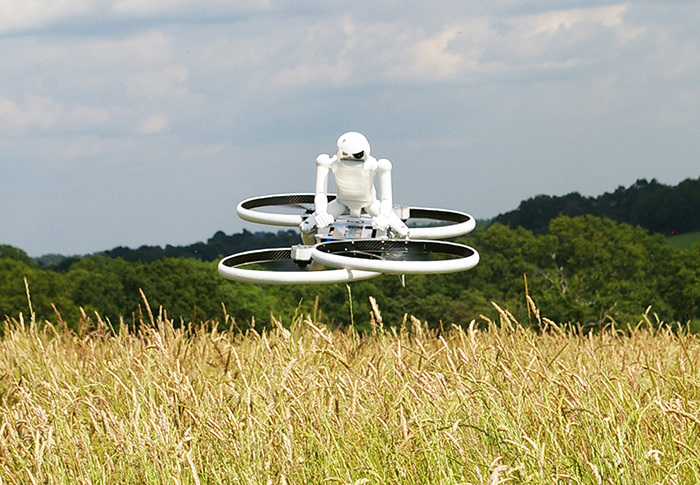 It’s quite clear we are now living in the future. It is 2014. All our dreams of shining spires, instant communication, genetic manipulation, smart drugs and smart machines, sinister governmental men in black and over-arching corporate control have come true. It’s like a Philip K Dick novel, but real.

Two things often lamented by SF geeks have been that, despite it definitely being the future, there were no helpful personal robots and no flying cars. There have been helpful humanoid robots for a few years now. A French made NAO robot was even purchased by an Evangelical Church in the US to help teach students about, an event abundant with spiritual and philosophical implications and ironies.

And the personal Flying Vehicle is here, now, and on the cusp of being the next big thing.

Based on drone technology, the Malloy Aeronautics Hoverbike is a lightweight, powerful low flying vehicle, like an aerial motorcycle. Designed in bi-copter and quad-copter formations, it can be flown remotely, as a drone carrying a payload, or can be configured to carry a rider.

Currently it’s conceived as fulfilling the same functions as motorbikes and quadbikes are used for in farming, cattle mustering, land surveying. Anything that requires ease of travel over uneven terrain. While the quad-copter form pictured with its slightly crazed robot passenger is a 1/3 scale, scaling up to full is really only a matter of cost. The possibilities are only limited by the imagination.

While on principle I oppose the use of manned or unmanned devices such as these in warfare, given their low speed and relative fragility, it is unlikely we will see fleets of them carrying trained soldiers firing energy weapons in battle scenes reminiscent of Flash Gordon or Star Wars, in the real world they are much more likely to be used to covertly attack and murder undefended civilians, however I can certainly see a positive use in the field of near-range rapid pizza deployment, the creation of artistic crop circles, Red Bull sponsored Olympic events, and just for fun.

There’s even a movement to ban the use of robots, drones and non-human intelligences in warfare; The Campaign To Stop Killer Robots. Because in the serious matter of killing each other, such decisions, and responsibilities, should be left to us, and the thought of a world overrun by artificial intelligence controlled autonomous devices, building, planning, deciding, killing, is a nightmare from The Terminator or Philip K Dick’s Second Variety.

The personal robot, the hoverbike, and the future are now, most definitely here. Let’s make sure we’re also here to enjoy that spectacular brave new world that has such marvels in it.

Malloy Aeronautics are also advertising for a position as a testpilot/technician, so if you’re clever and a daredevil, you could have your dream job and be part of making the future. You could be the Zefram Cochrane of hoverbikes and flying cars.