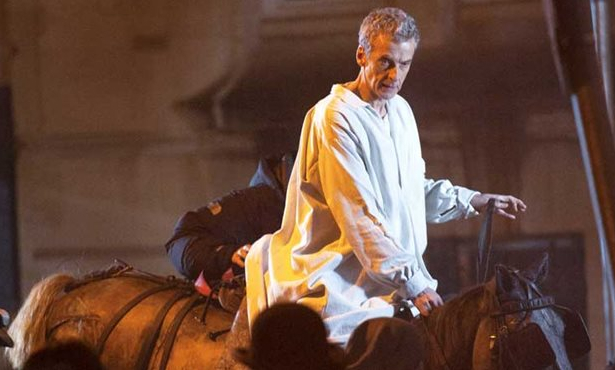 Doctor Who: First Photos Of Capaldi’s Scenes Cause Controversy

The BBC’s Doctor Who publicity machine is no small thing. Doctor Who is the BBC’s biggest export, and perhaps their greatest success, loved by fans of all ages the world over. The BBC now carefully manages the transition from one Doctor to another. With each special and each regeneration comes a slew of teasers, hints, photos and publicity events.

Hundreds of thousands of fans follow the official Doctor Who facebook and twitter accounts, or follow fansites or tumblr feeds or Google+ accounts that report on everything Doctor. When something new hits the internet, it spreads in viral chain reaction, from the biggest news sites, to the smallest fan page.

More than just a show, as a worldwide phenomenon, one could assume that Doctor Who doesn’t need free publicity. Yet the BBC courts it. It creates huge levels of fan engagement, and with careful timing, immense anticipation. However, I’m sure the show runners and the BBC remember the gradual collapse in audience share that occurred in the 80s, with the transition between Tom Baker and Peter Davison, and Peter Davison and Colin Baker, and Colin Baker to Sylvester McCoy – audience reaction was so bad Sylvester McCoy lasted one season before the show was cancelled. Of course it wasn’t an era of massive budgets for either production or publicity, and all of the former Doctors’ portrayals and stories are now much loved, because of, rather than despite the low budget monsters and creaky sets. It is both nostalgia and bewilderment, the joy of theatricality and the imaginative enthrallment of childhood.

So when the BBC releases a new photo or artwork, it is admired, poured over, examined for clues and hints, saved as screensavers and wallpapers, and spread across the Whoniverse.

When Wales Online released new stills from the new Doctor’s first episode, showing Peter Capaldi in a nightgown riding a cart horse, and Madame Vastra and Strax in Victorian street scenes, the pictures propagated across the internet. They weren’t particularly good pictures, one could assume they were snaps taken by a crew or cast member. Actually they were taken by PR photographer Matthew Horwood. Nor were they disseminated by the BBC’s publicity machine, for the joy of fans. Horwood was apparently hired by Wales Online for the shoot, and Wales Online undoubtedly had permission from the BBC to take the photos. However, the copyright remained with the photographer, who has been searching the internet, chasing down blogs that have used the photos, and requesting their removal, and requesting payment.

And we agree. He has every right to do so. The pictures are his, he owns the copyright. The issue is perhaps with the BBC. On one hand they clearly freely share publicity material for the use of fans, bloggers and the media, a method that garners them untold free exposure. On the other hand, what sort of exposure is generated when someone is trolling the tumblr accounts of 9 year old fans, sending them cease and desist orders and demanding payment?

Copyright in the new digital era, where everyone has access, and everyone can opine and publish at the click of a button, is a difficult issue subject, to much debate.  In most jurisdictions around the world, there is a Fair Use or Fair Dealing policy.

In the United Kingdom, Under the Copyright, Designs and Patents Act 1988 (CDPA), fair dealing is limited to: non-commercial research and private study, criticism, review, and news reporting (sections 29, 30, 178).

Similarly under US law, it is generally unlawful to distribute, reproduce, publicly display, publicly perform, etc, a copyrighted work without permission from the copyright owner. Again, there is a fair use exception, for purposes such as criticism, comment, news reporting, teaching, scholarship, or research.

Under Australian copyright law (Copyright Act 1968) fair dealing exceptions also include: research and study, review and criticism, reporting the news, use in legal advice and statutes, and parody and satire (with some exceptions).

But the issue here is with the BBC. If they want to engage fans, spread the news, promote Doctor Who freely across the internet, they should perhaps, employ one of their own talented photographers to do so, that way this sort of conflict, seemingly so at odds with their usual practice, doesn’t occur.

After contacting various departments, The BBC have finally responded, rather noncommittally, to these issues. We received a reply from Philip Boyce, of the BBC Complaints Department;

While it’s always great to hear from fans of the series, this isn’t an issue for the BBC and if you’re unhappy you’d have to approach the owner of the photographs. This is an issue for either the owner directly or the wider issue of UK copyright law, both of which are beyond the BBC.

All official BBC publicity is published as such, and the latest will be available on the programme’s own section of our website:

www.bcc.co.uk/doctorwho
Thanks again for taking the time to contact us.