What no one has asked, is why do animals wear vests, but not pants?

On April 1st 2012 the British Library fooled the world with the purported discovery of a cooke boke by one Geoffrey Fule, cook to a 14th century Queen of England, which purportedly included recipes for blackbird, hedgehog, herring, tripe, codswallop (a kind of fish stew), and roast unicorn. The Unicorn a la Fule recipe supposedly suggested marinading the beast in cloves and garlic, then roasting on a grill. Now there were numerous clues to the prankish nature of the entry on the British Library’s blog. The words herring, tripe, rule and codswallop should have been clear indicators. However, the illuminated images that accompanied the story probably went a long way toward convincing much of the internet of the jape’s veracity. The pictures of barbecuing unicorn, a dour-faced wench serving the head, the hoofs and off-cuts poking up from a bucket, lent a certain Bayeuxish veracity to the story. Truth is in the eye of the beholder, and proof is in the pudding, even if it be unicorn pudding.

You may have seen this curious kangaroo-like creature, peeking out between leaves and the pages of a rare Portuguese prayer book dated between 1580-1620. Has the history of the discovery of Australia been re-written? Previously the Dutch ship Duyfken under Captain Willem Janszoon was accorded the first European ship to reach Australian shores in 1606. Did Portuguese sailors tell tales of giant mice and the upside down people of the antipodes? Well, yes they did. But this did not necessarily mean that this was an Australian kangaroo. The red tree kangaroo lives throughout New Guinea and Indonesia, where the Portuguese traded and colonized in the age of discovery.
The mere existence of this medieval marsupial is not extraordinary. What is fascinating is the expression of shyness the artist has imbued in the depiction of the creature. Like Adam in the Garden of Eden, it seems the animal has learned shame, a desire to hide his nakedness, to clothe himself, even if it is just behind leaves. The manuscript, inscribed with the name Caterina de Carvalho, (a name meaning Oak in the Portuguese) a nun who lived in western Portugal at the turn of the 16th century, also includes a picture of a native man, clothed in leaves, which some have identified as an indigenous Australian, though the figure could easily be from Borneo or Papua. The significance of the figure is that of Adam, after tasting the forbidden fruit of the Tree of the Knowledge of Good and Evil, but before being expelled from paradise, man still in a state almost approaching grace.

Biblical depictions have long informed our notions about our relationship with animals. In the Garden of Eden the state of naked grace in which Adam and Eve exist, is the same innocence in which animals dwell. After a cursory convincing by the serpent, Eve and Adam both partake of the fruit, forbidden to them by God. Discovering shame, the first thing they realize is they are now different to the other animals;

Then the eyes of them both were opened, and they knew that they were naked; and they sewed fig leaves together, and made themselves aprons. (Genesis 3:7)

God then cursed the serpent, to henceforth go on his belly and eat dust, to suffer the enmity of man, the implication being of course that the serpent (Nachash in Hebrew, according to some meaning Upright, Shining One) before going on his belly, was a creature that stood. Shining One also means the Light Bringer, Lucifer, Lucifer – light bringer, before his fall, an angel clothed in shining raiments, and Satan – the serpent, the spoiler, scaled and naked after.

Man’s fall is marked by being clothed in animal skin, the sacrifice of an innocent to atone. An angel’s fall by being stripped, naked; for a higher being it seems no atonement is possible. In William Blake’s The Great Red Dragon and The Woman Clothed In Sun, from a series of paintings intended to illustrate the books of the Bible completed between 1805-1810, we see The Great Red Dragon, The Beast, The Adversary, Satan of Revelation, powerful, winged, horned and naked but for his signs of authority. 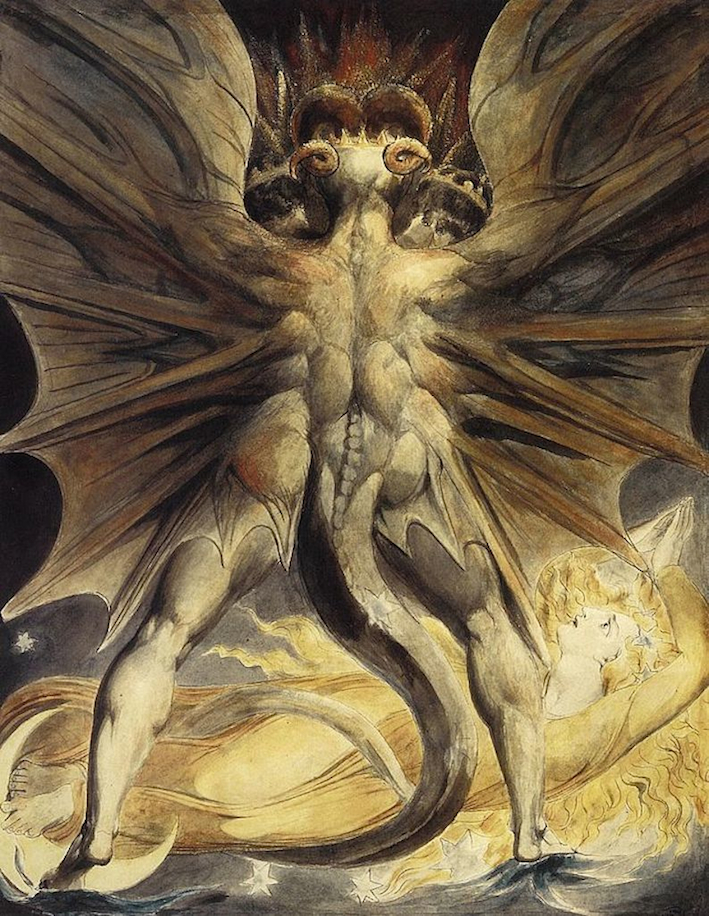 And behold a great red dragon, having seven heads and ten horns, and seven crowns upon his heads. And his tail drew the third part of the stars of heaven, and did cast them to the earth. (Revelation 12:3-4)

The woman, clothed in light, the moon under her feet, a crown of twelve stars on her head, is the mother of the Redeemer. The Dragon stands astride her, ready to devour the new Christ as he is born. The man child, is born, is taken up to God’s throne, the woman flees to the wilderness, war in heaven ensues, and Satan and his angels are again cast down, by the blood of the Lamb, to Earth.

Yet, in an image of Paradise regained, in the painting The Garden Of Eden, circa 1410, by an unknown master, undoubtedly commissioned for a prince who had such an enclosed garden, the Christ child, the Virgin Mary, saints and holy people are gathered in an idyllic hortus conclusus. The scowling Satan-monkey sits defeated and helpless at St Michael’s feet. The Dragon is no longer an awesome and fearsome beast, engaged in a vast and eternal drama, rather a small creature, basking in the sun. Here there are no fierce cherubim, flaming swords in hand, to keep sinners from the gate. Rather, birds trill on the wall and trees, St Cecilia and the holy child play gentle tunes at a psaltery. The Queen of Heaven reads, wisdom, peace, harmony abide. One fellow even plucks at fruit. The twined trunk speaks of union and the first garden. The Tree of Knowledge, the Tree of Life, in bloom, the forbidden fruits now ripe. Here is no angry deity to forestall wisdom or immortality. 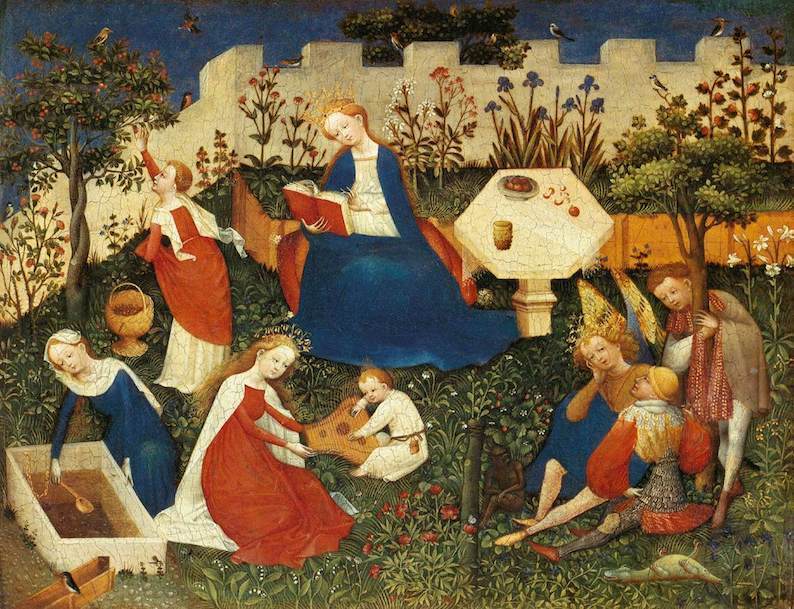 Camels and needle eyes aside, what is it that allows those clothed in fine raiment to repose in grace in Paradise?

In a contemporaneous Book Of Hours, a French book from the 15th century, we we see a cat, or more likely a maneless young lion, as they were want to draw them at that time, wearing only a simple chaperon, a hood with short cape around neck and shoulders. The proverb tells, Pride goeth before destruction, and an haughty spirit before a fall. (Proverbs 16:18) But this is no King of Beasts, no Lion of Judah, but a mere strolling player. He wears the simple hood of a working man. Yes, the chaperon developed into a fanciful garment, a fashion for nobles in bright colours with pieces that wound around head and neck like a turban. This is not such a garment. This is a plain, working-man’s chaperon. 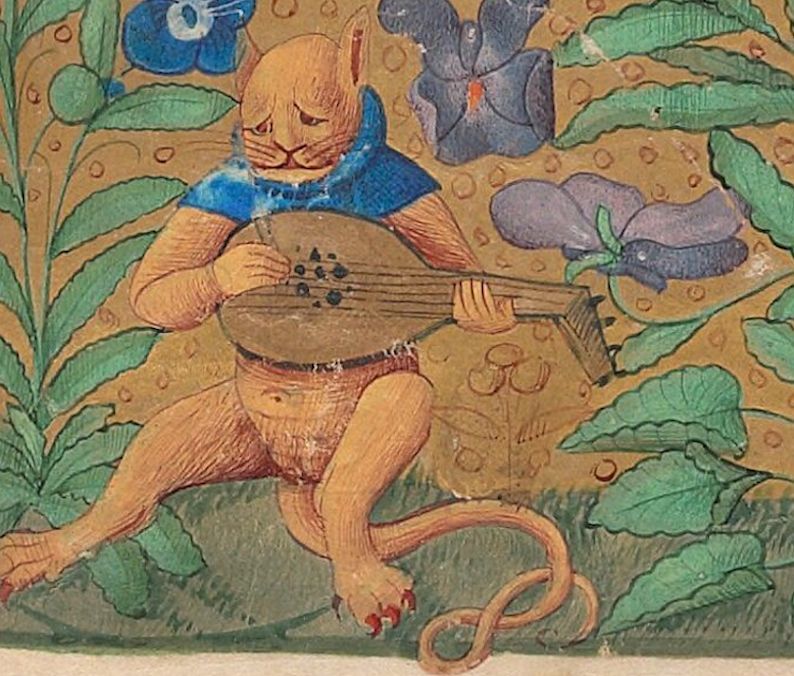 And yet our creature is no mere beast, here is also a minstrel, a musician, a melancholy poet. Like musicians from time immemorial, our lion of song seemingly has lost his pants. Of course with present day musicians that would be a cause for celebration, but such shenanigans were frowned upon in earlier times, further, pants were doubtless more expensive, and our lutist seems quite dour about the loss. And yet as a beast does not this creature have the grace of the animals of Eden? Well, he does, and he does not. Like Adam clothed in leaves, but not yet expelled, he is self aware, but without pants he also maintains his innocence. In the way the high born can have fine raiment in the new garden and remain in grace, the lowly can sin, and yet remain all unknowing innocence.

Forgiveness is naked, and love is brightly robed.

The Age of Enlightenment, the Age of Reason took man’s will to dominion over beasts, over landscape, over nature, over each other, over the heavens themselves. In David Teniers the Younger’s painting, Prodigal Son (1640) we see a monkey in motley, wearing a ball and chain. No longer an innocent, no longer in a state of grace, but a beast and a mockery; likely to ruckus and raucous and crap on the floor. The painting is said to represent the immorality, the profligacy, the infidelity of the wealthy son, dining with prostitutes, indulging in rich food and sensate music. The monkey eats an apple, the youth is bound to sin. In the age of reason there is neither grace nor forgiveness, only disobedience. 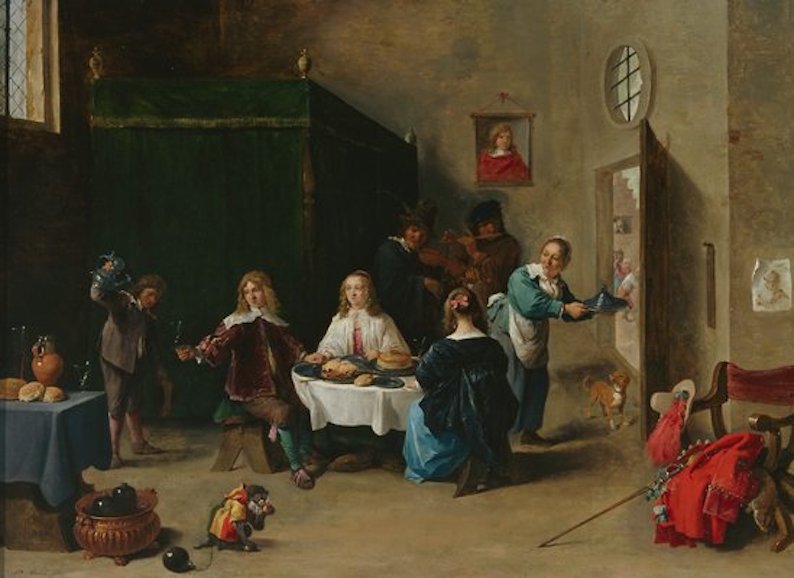 When authority becomes rational, defiance becomes spiritual. In more recent times, and yet in the same tradition, we have Top Cat, a scheming rogue, Donald Duck, petulant and irascible, even Humphrey B Bear, mute, curious, sometimes mischievous, and many others. Disparate characters without trousers, with diverse traits, which nevertheless share origins in the half-formed awareness but wholly innocent freedom of childhood.

It is something perhaps understood intrinsically by medieval artists, graffitists and the creators of South Park; even a highly dubious picture, especially a half-formed picture, one that engages the imagination, and a child-like amusement, convinces through the invocation of our innocent perception.

Animals, without pants return us to Eden.

Image of St John in the 8th Century Celtic Bible The Book Of Mulling alongside Jesus from the 21st Century animated program South Park.