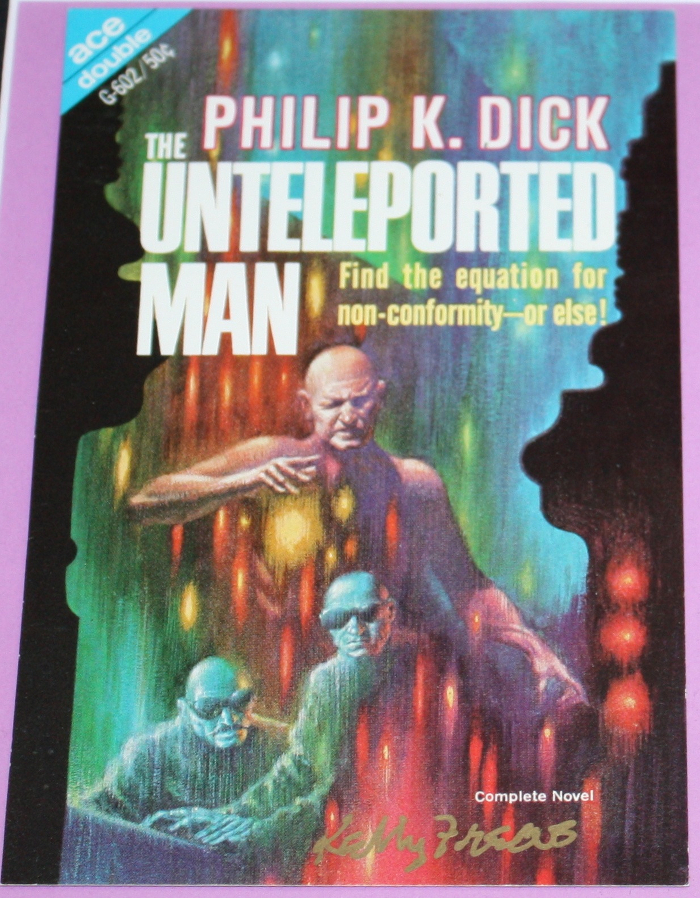 Publisher: Ace, NY (Published as an Ace Double with The Mind Monsters by Howard L Cory)

Story: Teleportation has made space travel obsolete, and 40 million emigrants have left a crowded and damaged Earth for the new and distant colony Whale Mouth. Unfortunately, it’s a one way trip. For unknown reasons the telpor system doesn’t return people to Earth. The only way back is an 18 year journey by space ship in a form of limited suspended animation.

Rachmael ben Applebaum, whose space ship business has been ruined by the teleportation system, doubts the Utopian vision of the colony presented by the authorities, and decides to make the 18 year journey from Earth to Whale Mouth by conventional space craft. What he discovers there is……

This is the first edition story line. Through a convoluted process the original was expanded from novelette to a complete novel, with twists involving expanding consciousness and parallel shared realities.

The Cover: This is actually a printer’s proof of the cover, signed by Kelly Freas, rather than the actual book. Sinister figures operating the teleportation device, mysterious lights and cosmic lights, and the central figure, perhaps trapped between this moment and place and the next. The implication is the figure is perhaps unable to be teleported, or perhaps is being forcibly teleported, to an unknown destination with unknown consequences. I’m not sure how relevant the image is to the story, but it does embody (or perhaps disembody) fantastic mystery and tension.