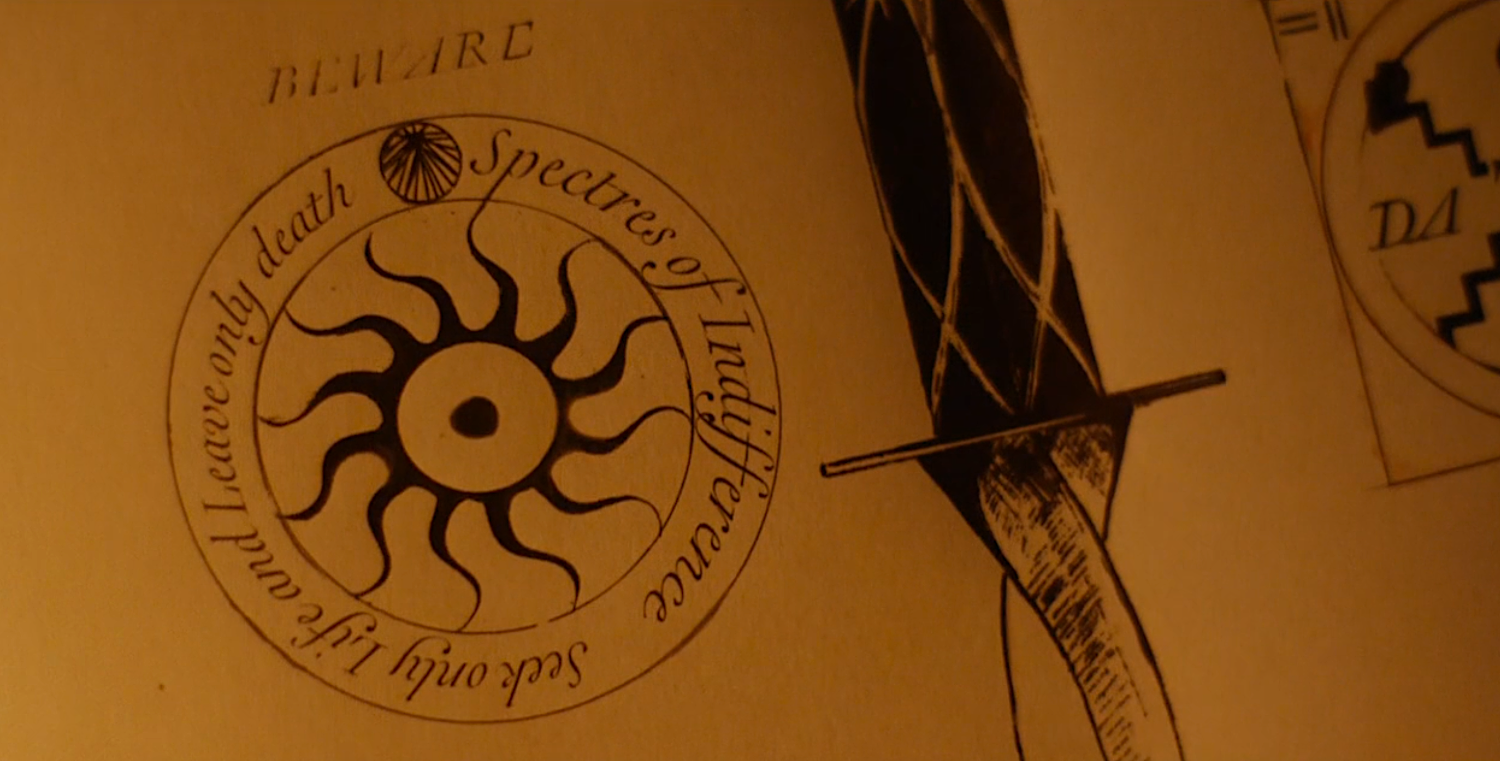 His Dark Materials Book to Screen Analysis: Season 2 Episode 4 ‘Tower of the Angels’

Episode 4 Spoilers
Tower of the Angels

I thought that the hope of seeing a great adaptation of His Dark Materials died back in 2007 with the poorly-performing and studio-butchered The Golden Compass movie. This week, 13 years later, it was pretty amazing to hear the first Angel from Philip Pullman’s universe on screen. To open the episode, a classic high fantasy sequence, narrated by Sophie Okonedo, making her debut as the angel Xaphania, led us through the history of the Subtle Knife, the Æsahættr, setting the tone for Tower of the Angels.

There are a lot of threads to gather together at this point in the story. Mary is beginning to strain under the pressure of a presence she can neither understand, nor summon in Lyra’s absence. Boreal pays her a visit under the guise of an interested investor, with Oliver Payne throwing himself at Boreal’s feet with the promise of funding. Boreal betrays his other-world self again, this time with the hilarious line that he admires “women with a good work ethic”, much to Mary’s horror. However, when Mary learns it is ‘defence’ funding she throws Boreal out. The distinction between Oliver and Mary is made clear in this scene, Oliver is willing to let the military encroach on their work for money; he then talks down to Mary by claiming a lack of sleep is affecting her work and her sanity, questioning if Lyra really exists. Mary, on the other hand, wants to protect her work at any cost.

Meanwhile, Lee reaches his goal, finding Stanislaus Grumman, or Jopari. Lee’s dogged determination to protect Lyra doesn’t waver a fraction even in the face of Jopari’s speech about great forces lining up to battle. Lee is outraged that Asriel left Lyra. “I never had a daughter. I haven’t been that lucky. But if I did, I hope she’d be half as strong and brave and good.” Lee says, his voice breaking on the word good. Jopari confesses that he had to leave his own son. The scene followed much of the original text in style but the dialogue was heavily abridged. Still Lin-Manuel Miranda and Andrew Scott did much to forge a real connection between the two characters in their brief scenes.

In the tower, Will and Lyra reach their destiny. But Tullio, Angelica’s older brother, is hiding in the tower, having stolen the Subtle Knife from the bearer, Giacomo Paradisi. The sequence was superb, and satisfyingly detailed. Upon entering the tower Will and Lyra find Giacomo Paradisi tied up. A terrified Tullio is hiding from the Spectres, knowing that the knife is his only defence. Will and Lyra, at this point, only want to get the knife back to Boreal, so they can reclaim the Alethiometer. Will thinks that the Alethiometer will help them find his father, and even watching the knife slice effortlessly through metal doesn’t weaken his resolve, although it terrifies Lyra and Pan. Pan is just as involved as Lyra in the struggle, urging Lyra to help Will, he and Lyra falling as one when Tullio strikes Pan. It is Pan who approaches Will to try and comfort him and lend him strength when he sinks into despair, ignoring the great taboo of his own world. 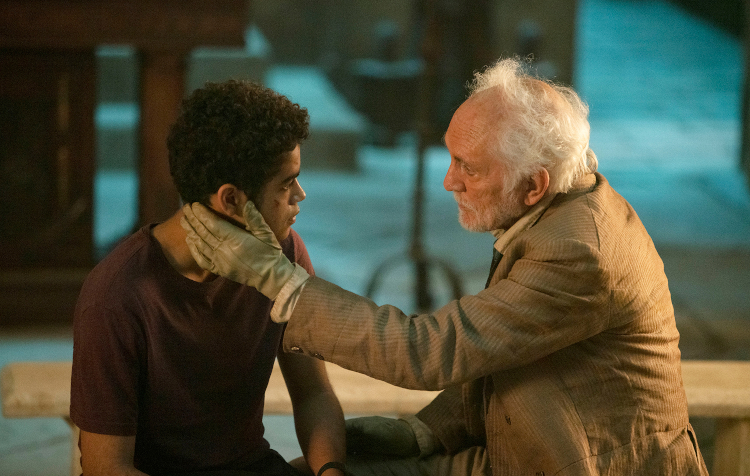 Terence Stamp gave a memorable performance as Giacomo Paradisi. When the realisation dawns on Giacomo that Will was the new bearer as Will’s fingers fell away, he switches to steely determination, urging Will to fight. He then ignores his own impending end to prepare Will to wield the knife. Lyra and Will, and particularly Will, form an attachment to the elderly man quickly, and are devastated to let him go to his death, even when Giacomo begs them leave to meet his fate in private. Giacomo dubs Lyra as wise, and it is Lyra who holds Will back when Giacomo leaves to poison himself. It is Lyra who drags him from the base of the tower as he keeps watch, even though he can’t see the spectres, reluctant to leave Giacomo on his own. Perhaps because Lyra has already been separated from so many parent figures, from Jordan, the Gyptians, the panserbjørn and Lee Scoresby, and Will is newly-separated from his mother, it makes sense for Lyra to be the stoic one.

It is in this episode, and this point of the story, that Lyra and Will truly become equals. Their friendship is also firmly cemented. Lyra makes a gesture, backing slowly into the bathroom to bring Will towels, just as Roger backed into the bathroom, perhaps craving that same feeling of closeness she had with her best friend. But it’ clear she now admires Will. When the alethiometer told her Will was a “murderer”, Lyra, poor, young Lyra’s, first thought was only that a murderer made a worthy companion. 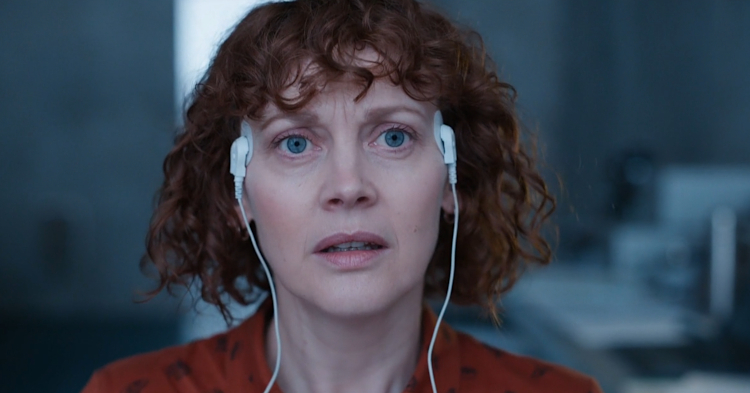 To close the episode, Mary Malone is finally, unequivocally, shaken out of her secular and scientific existence, with the shocking revelation that her conscious “shadow particles” are Dust, and Dust is Angels.

You’ve always been there?

So does that mean Angels have intervened in human evolution?

Book to Screen: Full book spoilers follow. Scenes from Tower of the Angels covered chapters eight, ten and twelve; chapters nine and eleven will likely appear in next week’s episode. 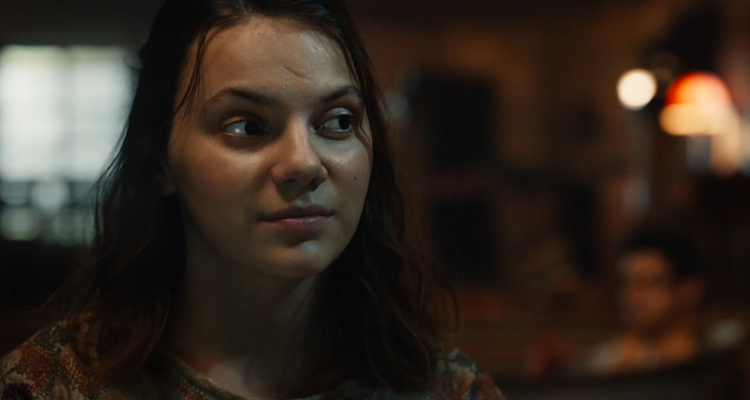 After the budget constraints severely affecting the presence of dæmons in the first season, it is so satisfying to see dæmons so involved in everything this season. It feels like we have seen more unnamed Magisterium dæmons on screen this season than we saw of all of the Gyptians’ dæmons in the first season, we even got a glimpse of Father McPhail’s little snake dæmon whispering to him is episode two. But most of all the fight for the Subtle Knife in the Tower of Angels would not have been the same without Pan’s pervasive presence throughout.

At this point the adaptation is both merging with major plot points and moving away from the book. There is a lot of dialogue, both internal and external, that is not going to make it to the screen. One aspect I have been paying more attention to is Mrs. Coulter and Boreal’s relationship, now that in The Subtle Knife we see him more through Lyra’s eyes, a silver-haired man in his sixties, twenty years older than Ariyon Bakare, easily 30 years older than Marisa Coulter’s character. There is a much smaller age difference in the screen relationship, which makes it seem more born of actual sexual desire than the book relationship, in which Mrs Coulter was probably using the elderly Lord Boreal for her own purposes. She could, of course, still be using a man closer to her own age, but it does put a slightly different slant on things. With that said, Mrs. Coulter has always shown her willingness to use her femininity as a weapon against the Magisterium, unlike the previous screen incarnation, which was so cold and repressive.

John Parry has always had one of my favourite “descriptions” of dæmons and I was so glad they included his line, looking up at Sayan Kötör, saying “Can you imagine my astonishment, in turn, at learning that part of my own nature was female, and bird-formed, and beautiful?”. The idea that dæmons are a part of their human’s nature has a familiarity, unlike the repeated clunky descriptions of dæmons being “physical manifestations of a soul”, and being a part of their human’s nature still allows them individuality. The scenes between Lee and Jopari were very brief and lost a lot of dialogue. It’s not likely to have a big impact on Jopari’s story arc, however, I think the main focus will be his meeting with Will, one of his lines was even given over to Boreal in the episode.

Will and Lyra’s story continues to follow the original text with seemingly small differences, although some of them have a lot of impact. Eleven year-old book Lyra was always keen to impress Will, to prove her own competence in the face of his depressingly fierce competence. After Will loses his fingers he loses some of that confidence, he feels physically and emotionally sick and I have always enjoyed watching Lyra switch to leader at this point, their roles reversed, she making sure he has clean clothes and bandages and taking care of the cooking. Just prior to this role reversal, though, Lyra’s emotions give way to despair at leaving Giacomo in the tower to poison himself. In this episode, the roles were reversed. Will had some sorely-missed parental support from Giacomo, and it was Will who couldn’t bear to leave him. But then Lyra’s relief when Will tells them they will retrieve the alethiometer together was palpable. Finally, the children are in it together.