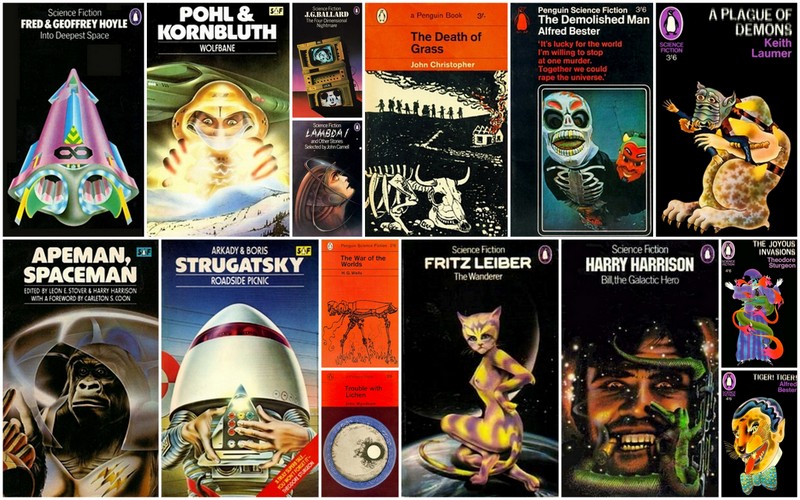 From the iconic orange and white covers to the amazing modern art and superb children’s illustrators, Penguin Books has always been the leader in cover art. There is even a Penguin Collector’s Society, their aim to conserve and preserve vintage Penguin books.

The first Penguin paperbacks appeared in the summer of 1935 and included works by Ernest Hemingway, André Maurois and Agatha Christie. They were colour coded (orange for fiction, blue for biography, green for crime) and cost just sixpence, the same price as a packet of cigarettes. The way the public thought about books changed forever – the paperback revolution had begun.

Along with their Classic and Crime series, Penguin also published science fiction books. Penguin launched their Science Fiction series in 1963, asking Brian Aldiss to be the general editor and to recommend some titles for inclusion in the new series. His first choice was Olaf Stapledon’s Last and First Men. It did not sell very well, while Aldiss praised the title in his foreword, the blurb described it as ‘history of the next two thousand years’, which didn’t seem to intrigue people.

Then Penguin’s director of cover art, Germano Facetti, had the idea of pairing each new title to be published with a cover featuring modern art, each painting having have a subtle connection to the text. The covers of the Science Fiction series series would feature some of the major names in modern art such as Max Ernst, Paul Klee, Yves Tanguy, Joan Miró and René Magritte.

It wasn’t until 1967, however, that the weird and wonderful psychedelic art started featuring on the covers of the Science Fiction series. At the time founder Allen Lane was becoming concerned about the marketing and distribution of fiction and felt that the covers were becoming too commercial and increasingly tasteless. A boardroom altercation resulted in the Chief Editor’s departure. At this point art director Alan Aldridge decided he wanted to reach the children’s market, as the previous cover art was targeted at adults. His covers for the Penguin Science Fiction series are some of the most sought-after titles today. Unfortunately, he only lasted until 1968, his covers while loved by some, sparked hostile reactions from others.

His replacement, David Pelham is responsible for the iconic Clockwork Orange cover from 1972. Regarded as one of the best book covers ever created, Pelham had to come up with the design literally overnight when the original artist submitted ‘a very poor job very late’.

Despite Allen Lane’s misgivings, vintage Penguin Classics are still loved and collected today in all of their forms, and Penguin still remains the most popular publisher for classics today. There is something comforting about having the familiar Penguin classics piled on your shelf. My own shelf includes a collection of vintage editions, several different Animal Farm books, a well-loved stack of 1940’s Ancient Greek texts in the brown covers, a few Shakespeare’s with the white paper dust-jackets,  and plenty of the modern black-covered editions along with the reproduction Popular Penguins. Now to make some room for a new Philip K. Dick collection.

You can read more about the history of Penguin Book covers and check out an incredible display of cover art at The Art of Penguin Science Fiction. Navigate from the white book in top left corner “Contents”.