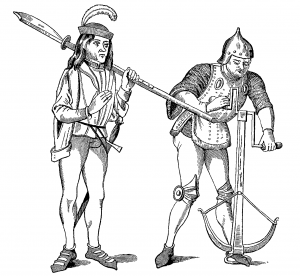 A varlet or squire holding a Knight’s halberd. Beside him a crossbowman. Image from the 15th Century Chroniques Of Froissart.

1. A man or boy acting as a menial servant

3. A rascal, rogue, vagrant or scallywag. An unprincipled person.

Middle English, from Old French, variant of valet or vaslet, from vassal.

In Feudal times, a vassal was someone who had entered into an agreement of military support and mutual protection with a Lord or Monarch, in exchange for certain privileges, generally Fiefdom over an area of land. The vassal managed and derived wealth from the Fiefdom, and paid the Lord or Monarch in taxes and resources, including wood, game, grain, as well labour in the form of peasants and servants.

While in France varlet was only applied to a Knight’s servant, in England the term and its variations came to be applied more generally to any personal male servant.

In modern usage, especially in the US, a valet is generally associated with various jobs in the hotel industry in which personal services are attended to for guests.

How did the term Varlet develop from servant to rogue? This is purely speculation, as it is a transition lost in history, however the clue is very much in a loose translation of the term, unprincipled. Meaning someone without morals or honour, unlearned. Principled in the 14th century came to mean having knowledge of the first rules, axioms or origins of a craft or discipline. Derived from the Latin principium, meaning beginning or or foundation, with origins in princeps, meaning first in time or order; the first, chief, pre-eminent, distinguished, noble or prince. Thus someone who is unprincipled is someone without a Prince.

From there it is not a difficult leap to imagine a young man of medieval times, the subject or even property of his lord, suddenly removed from his familiar home, and sent to serve as a valet or varlet to a Monarch to whom his lord owes vassalage. Like any young man, his education perhaps suddenly interrupted, finding himself in new territory, no longer constrained by familiar figures of authority, perhaps involved in the small skirmishes and greater upheavals of medieval warfare, one can easily imagine how his behaviour may transform from valet to varlet.