Search
Home
Game of Thrones
Ishould have expected Dan and Dave to get everything they could out of the duel between Oberyn and the Mountain. The duel itself certainly looked wonderful, but that ending? I think they pushed it further than even I expected. Blergh. Pedro played Oberyn wonderfully, and I think we all feel his loss keenly all over again (damn you George). Be sure to check out the video showing more of the amazing spear they made especially for the duel. 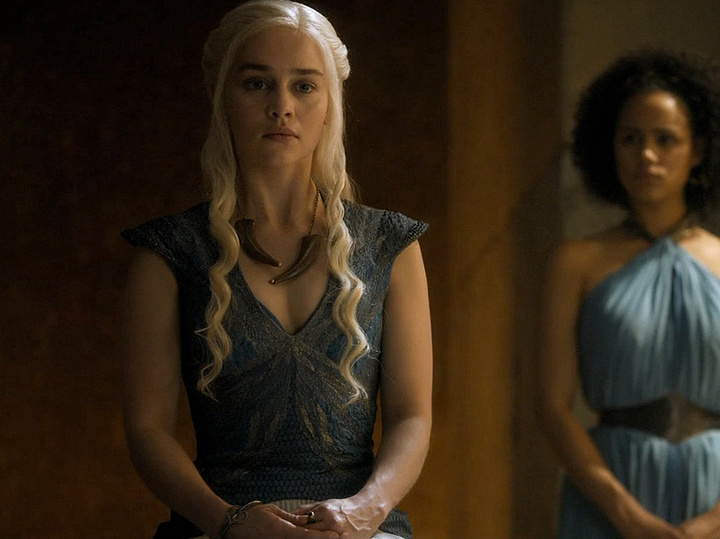 But looking at missed opportunities I am mystified that Jorah’s lust, rather than just his love, for Daeny was not played out in the series. I have always assumed Daeny sending Jorah away was partly because he was becoming so obsessed with her. He should never have kissed me. He presumed too much, and I permitted it. It should never happen again. This is where the relationship between Daeny and Jorah begins to break down kissed me…betrayed me. It is that first betrayal, and the fact that Jorah’s feelings are becoming dangerous that strengthens her resolve. In this episode it is played out that it is because Jorah endangered her child. I wonder then, if we will see more of Jorah or if his storyline on the series has ended? 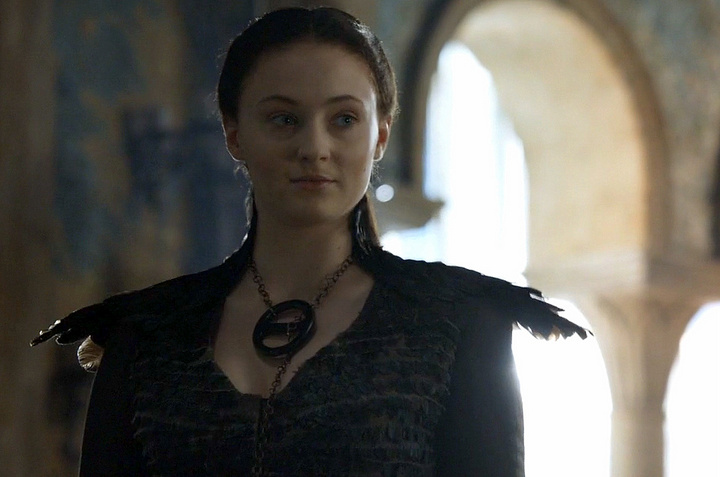 Not a child any more

What stood out in this week’s episode was Sansa. We’re coming up on a decade since we heard from Sansa Stark in the books, the last glimpses in a Feast for Crows. So firstly they throw us a huge Winds of Winter (or beyond) spoiler, with Sansa revealing her identity to Lord Royce, Lady Waynwood, and Ser Corbray. Then Sansa undergoes an amazing transformation where she cannily backs Baelish, lying to the nobles of the Vale and ensuring Baelish’s position as Lord of the Vale is safe. When he asks her why she agrees with him that she chose to back the man she knew over strangers.

The main point I want to touch on here is that Sansa’s growth in the books is a lot slower. Sophie Turner had made comments earlier this year about Sansa ‘learning to seduce’ so this isn’t a big shock – and as to be expected it is fairly clichéd. But with that said, and with many Maleficent jokes making the rounds, I hope we don’t lose sight of Sansa’s real inner strength, something her mother and her one-time mother-in-law were sorely lacking. Sansa’s strength is her grace, and her empathy and kindness. It is what makes Sansa stand out from the rest of the women in A Song of Ice and Fire.

Interestingly much of the woman Sansa is destined to become in seen in her interaction with others, rather than her inner thoughts. We did see a glimpse of that this week where she seemed to be almost trying to reconcile herself with the fact that she threw her lot in with Baelish. “I know what you want,” she tells Baelish baldly, almost determinedly, while she attends to her sewing. We’ve long been waiting for Sansa to grow up. But I hope Sansa will retain what makes people love her and loyal to her, from strange men like the Hound and Ser Dontos, to the ones I hope will help her gain her rightful place in the end.

I am still waiting for that same maiden to slay a giant in a castle made of snow.

Check out Jamie’s full recap of The Mountain and the Viper on History Behind Game of Thrones.

Dr. Steven Isaac takes a look at echoes of medieval history in The Mountain vs The Viper Duel.
Only two episodes left! Next week The Watchers on the Wall