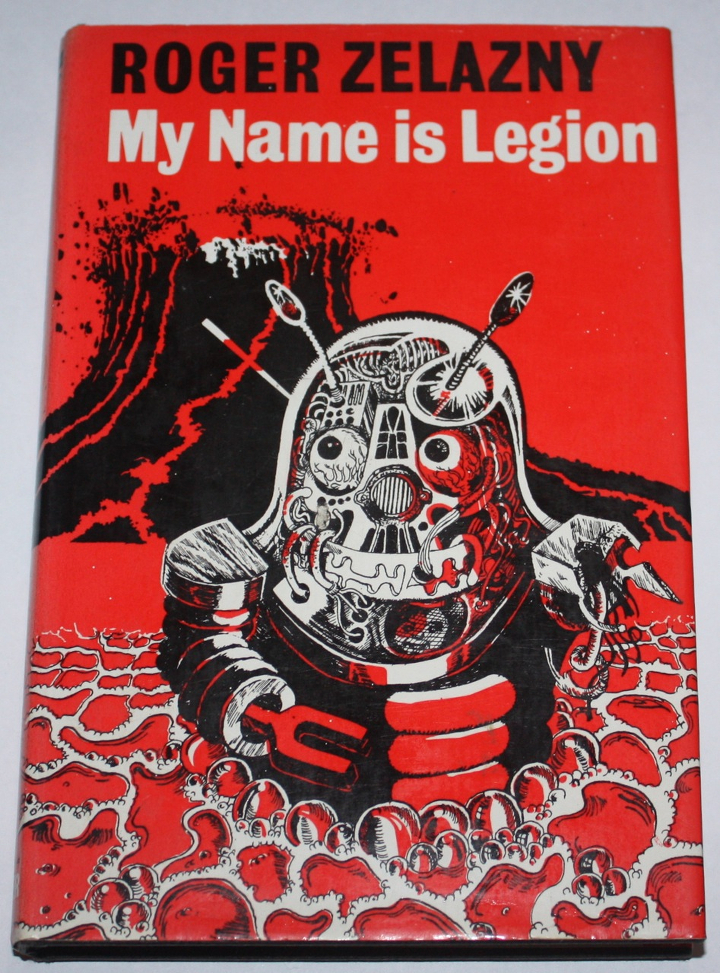 My Name Is Legion | Roger Zelazny

Title: My Name Is Legion

Story: Follows the missions of a super agent, identity deleted from the world’s global network, able to create artificial identities in that network. He must identify and destroy saboteurs on a controversial project to create artificial islands using nuclear detonations, he must clear dolphins from murder charges, and in the third story, Home Is The Hangman, previously published in Astounding Magazine in 1975, winner of the 1976 Hugo Award for best Novella, he must defeat an indestructible murderous cybernetic telefactor, (remotely controlled cyborg) suddenly self aware and returned from a space mission bent on the destruction of  its controllers, the murderers of its creator.

The Cover: A Robbie The Robot-ish, or Robot B-9 (Lost In Space’s robot) kind of robot, with the addition of horror-comic living, veined, googley eyes , wades through a bubbling sea of lava while a volcano erupts in the background. As far as I can tell this cover bears almost no relationship to the stories in the book. Yes, there are nuclear explosions which create islands, and in a different story there is a humanoid cybernetic robot. The twain, unfortunately, do not meet. However, for capturing a moment ripe with possibilities, as our human-eyed robotic hero, damaged from his exploits, flees from an exploding volcano, which one suspects, he caused to erupt, this cover is almost perfect. Now if he was only carrying a female figure with most of her clothes falling off, it would encapsulate many a young Sci Fi fan’s fantasy.