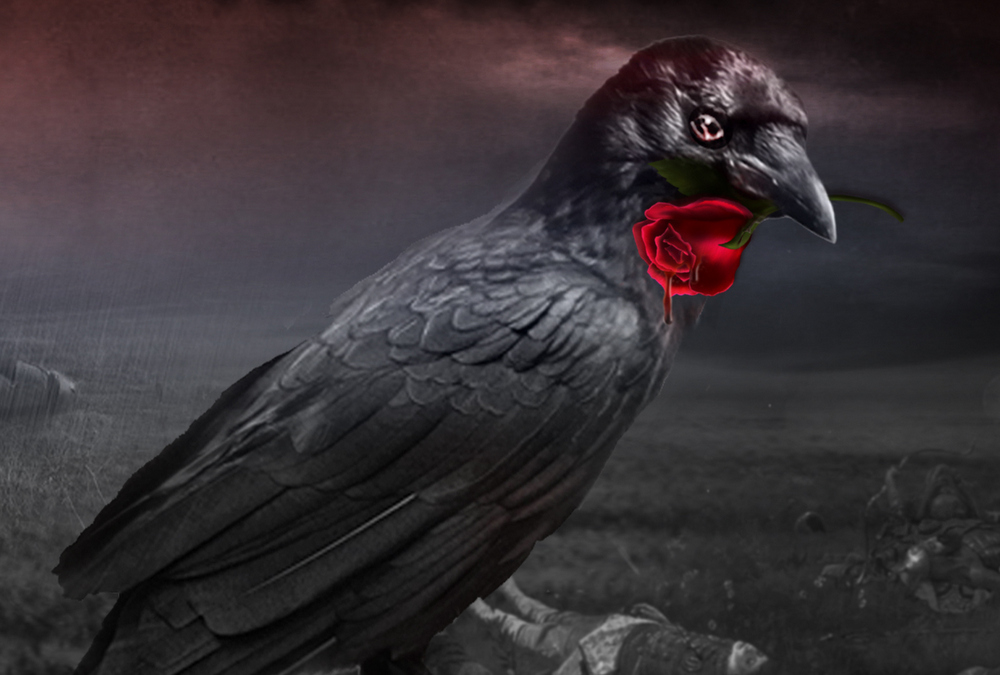 The Claimant: A Novel of the Wars of the Roses Book Tour – Simon Anderson on Towton Battlefield 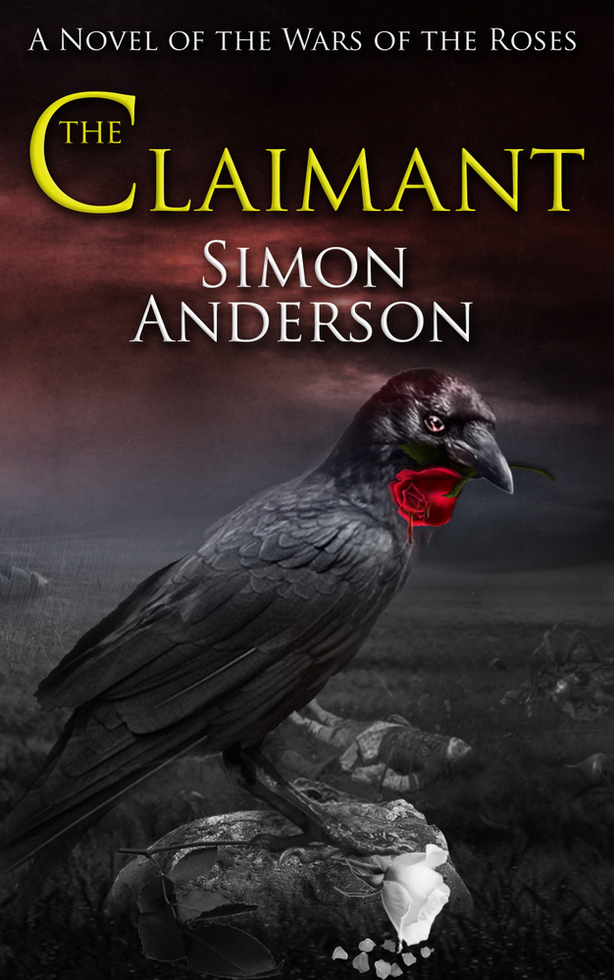 Today we’re pleased to be launching the book tour for Simon Anderson’s gripping debut novel, The Claimant: A Novel of the Wars of the Roses. Simon has joined us to discuss his one of his favourite places from his extensive research for the novel, Towton Battlefield, where one of the most terrible battles in English history took place.

My favourite place associated with The Claimant

Over the course of researching The Claimant I visited numerous places so that I might gain a more detailed perspective on aspects such as terrain, viewpoints, buildings and roads. It also gave me an excuse to get out of the house! Denbigh Castle and the small villages clustered around the northern extremity of the Clwydian Hills were a joy to behold nestling in the greenery of the North Welsh Border country. Ludlow charmed and delighted me with its mighty stronghold, its looping rivers and its mass of listed buildings and the surrounding Shropshire countryside is some of the most beautiful and peaceful you will find anywhere.

The site with which I felt the strongest connection, however, was the huge, almost featureless battlefield at Towton, near Tadcaster in Yorkshire. Remarkably no building has taken place on the wide, open fields over which two massive armies struggled for dominance during a snowstorm in March 1461. It is therefore entirely possible to stand in the middle of the scene and picture in your mind the disposition of the various “battles” or divisions of troops on each side and also to appreciate just how bleak the place must have felt in the bitter weather that accompanied the fighting. Many thousands of soldiers would have had no option but to spend the night prior to the battle out in the open on the hard, snow-covered ground.

I described the site as “almost featureless” – well there are certainly two significant features to interrupt the gentle fold of the valley that lay between the opposing armies. A lone hawthorn tree, silhouetted starkly against the skyline on a long ridge, was said to have been there at the time and was thought to be the spot from which the Yorkist forces coming up from the South first laid eyes on the vast Lancastrian array which had come from York, in the North.

The other very obvious feature is the steep slope at the western end of the battlefield, leading down to Cock Beck. This is a serious incline, in sharp contrast to the smooth undulations of the rest of the site, and one can easily imagine that when covered in slippery snow it would have become a major obstacle for the routed, panicking Lancastrian troops trying to make their escape. Cock Beck itself looks innocuous enough on a warm Summer’s day but I have seen pictures of it in flood, as it was on the day of the battle, and it changes from a pretty stream a few yards wide and a few feet deep into an expansive and treacherous water meadow. Anyone trying to navigate their way across would have no way of knowing how deep the water was at any point, nor what the ground was doing below the swirling surface. Add in fear, panic, gathering dark and a vengeful pursuing enemy and it is little wonder that so many unfortunate souls were trampled and drowned in the terrible rout that followed the main battle.

I cannot talk of Towton without mentioning the Towton Battlefield Society. This group of dedicated experts and enthusiasts work tirelessly to protect the status of the site. They also put a lot of effort into making the site more accessible to the public. Although the battlefield is largely private farmland there is, thanks to the cooperation of the landowner, a decent circular path which allows you to see a good proportion of the site as you walk around. There are also very helpful information boards at intervals with pictures and explanations to help the visitor to understand the events of that fateful day. There is far more to Towton than just open space, however. In 1996 a rare medieval battlefield grave was discovered close to Towton Hall. Its careful excavation revealed almost 40 skeletons tightly packed in the mass burial. A great many of them bore unmistakable signs of massive injuries caused by edged and pointed weapons and give us a valuable insight into the utter brutality of what was the bloodiest battle ever fought on English soil. Taking into account the huge number of dead at the end of that awful day (said to be as many as 28,000) there must be many, many other victims waiting to be discovered. It is for this reason and many more that the battlefield must be protected against modern encroachment if we are not to lose a unique window to the past. It is the members of the Towton Battlefield Society who are leading the fight to keep this priceless heritage safe.

The jewel in the crown of the TBS, however, is the annual Palm Sunday Event. This takes a lot of organising on a voluntary basis but the end result is a memorable day full of all kinds of entertainment, from guided walks (with the guides in period costume), medieval craft workers plying their trades and falconry displays to the Grand Finale – a thrilling battle re-enactment by some of the most authentic and dedicated group members you will find.

There are also trade stands in the big barn where artists sell their paintings (Graham Turner among them no less!) and authors promote their books. Authors you say? Books? Yes, this is where I come in. My wife and I have been members of the TBS for a while and I was over the Moon when the Chairman, Mark Taylor, offered me a stall at the 2012 Palm Sunday Event. I had a pile of “Claimants” ready to sell, blinged up my pitch with a few bits of my medieval collection then topped it off by donning my full 15th century outfit – doublet, hose, boots, hat, breastplate, the lot. It was great fun meeting the public and chatting to the other traders. I also sold a few copies of my book, which was nice! It was, however, a very cold day and the shady barn was a chilly place to say the least so eventually I packed my things away, stepped out into the glorious Spring sunshine and accompanied Sarah on a walk round the medieval “village” which had been erected in the fields next to Towton Hall. I really cannot put into words just how fantastic it felt to be walking around among all the trade tents, staffed by period-costumed craftspeople, and mingling with all the re-enactors without feeling remotely out of place. I’m sure I would get some odd looks if I went into our local Post Office dressed for 1461 with a crossbow over my shoulder, but not at Towton. What an amazing day, what a wonderful place… 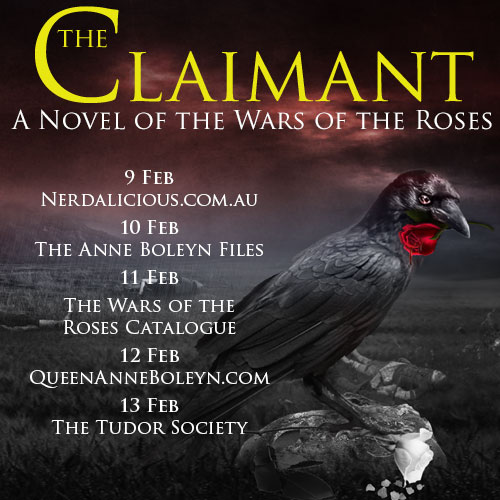 Check out all the stops on the The Claimant: A Novel of the Wars of the Roses Book Tour. You have a chance to win a copy each day courtesy of MadeGlobal Publishing!

10 February – The Anne Boleyn Files – “The Claimant: An Excerpt”

Win a copy of The Claimant: A Novel of the Wars of the Roses!

Entries close Sunday 15th February at midnight. Please keep an eye on your inboxes, the winner has five days to respond or a new winner will be chosen. 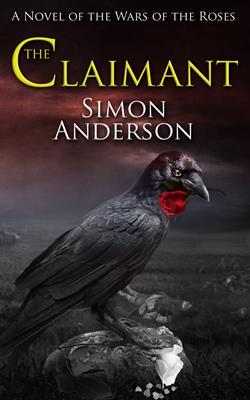 The Claimant: A Novel of the Wars of the Roses

Click here to buy The Claimant with Free Worldwide Shipping

The Claimant Kindle Countdown deal – only 99c/99p on Amazon US and Amazon UK from the 9th – 12th of February.

October, 1459. The harvest is gathered and the country wears its autumn livery. Four years after the first battle of The Cousins’ Wars, later known as The Wars of the Roses, the simmering political tensions between the Royal Houses of Lancaster and York have once again boiled over into armed confrontation. Nobles must decide which faction to support in the bitter struggle for power. The stakes are high and those who choose unwisely have everything to lose. Sir Geoffrey Wardlow follows the Duke of York while others rally to King Henry’s cause, but one in particular company under the Royal banner is not all it seems, its leader bent on extracting a terrible revenge that will shatter the lives of the Wardlow family. Edmund of Calais has a private score to settle and is prepared to risk everything to satisfy his thirst for revenge. Riding the mounting wave of political upheaval, he willingly throws himself time and again into the lethal mayhem of a medieval battle as he strives to achieve his aim. One man is out to stop him: his half-brother, Richard. Born of the same father but of very different minds the two young men find themselves on opposite sides during the violence that erupts as political tensions finally reach breaking point. Each has sworn to kill the other should they meet on the field of battle. As they play their cat-and-mouse game in the hope of forcing a decisive confrontation, their loved ones are drawn inexorably into the fray, forcing the protagonists to question the true cost of victory…

Meet author Simon Anderson, author of The Claimant, a fast paced historical novel based in the time of the Wars of the Roses.

For as long as Simon can remember he has been fascinated by the medieval world, in particular the glorious triumphs and shattering reverses of the period in English history known as the Wars of the Roses. Extensive research in both England and Wales has facilitated the writing of a novel which interprets the actual events of those times through the eyes of his characters. Prepare for a journey…